Genes and Their Role in Human Variation 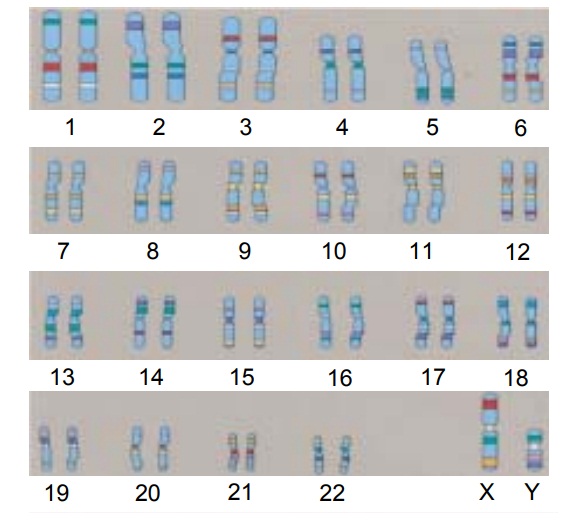 Genes are central components of human health and disease.

Scientists and philosophers have long speculated about heredity and developed theories to explain how traits are transmitted to offspring. Developments in technology and research have accel-erated progress in our understanding of genetics, allowing scientists to better understand relatively rare diseases such as phenylketonuria (PKU) or hemophilia that are related to muta-tions of a single gene inherited in families. New technologies and tools allow scientists to characterize inherited metabolic varia-tions that interact over time and lead to common diseases such as cancer, heart disease, and dementia. This transition from genetics to genomics highlights how our understanding of single genes and their individual functions has evolved to understanding how multiple genes act and control biologic processes. Most health conditions are now believed to be the result of a combination of genetic and environmental influences and interactions (Billings, 2000).

GENES AND THEIR ROLEIN HUMAN VARIATION

Genes are central components of human health and disease. Work on the Human Genome Project (an international research effort to map and sequence the human genome in its entirety) has shown how basic human genetics is to human development, health, and disease. Knowledge that specific genes are associated with specific genetic conditions makes diagnosis possible, even in the unborn. Research continues to demonstrate how many common conditions have genetic causes. Many more associa-tions between genetics, health, and disease will likely be identi-fied as scientists complete and refine human genome mapping and sequencing.

A person’s unique genetic constitution, called a genotype, is made up of some 30,000 to 40,000 genes. A person’s phenotype, the observable characteristics of his or her genotype, includes physical appearance and other biologic, physiologic, and molec-ular traits. Environmental influences modify every individual’s phenotype, even those with a major genetic component.

Human growth, development, and disease occur as a result of both genetic and environmental influences and interactions. The contribution of genetic factors may be large or small. For exam-ple, in a person with cystic fibrosis or PKU, the genetic contribu-tion is significant. In contrast, the genetic contribution underlying a person’s response to infection may be less so.

An individual gene is conceptualized as a unit of heredity. A gene is composed of a segment of deoxyribonucleic acid (DNA) that contains a specific set of instructions for making the protein or proteins needed by body cells for proper functioning. Genes regulate both the types of proteins made and the rate at which proteins are produced. The structure of the DNA molecule is re-ferred to as the double helix. The essential components of the DNA molecule are sugar-phosphate molecules and pairs of ni-trogenous bases. Each nucleotide contains a sugar (deoxyribose), a phosphate group, and one of four nitrogenous bases: adenine (A), cytosine (C), guanine (G), and thymine (T). DNA is com-posed of two-paired strands, each made up of a number of nu-cleotides. The strands are held together by hydrogen bonds between pairs of bases (Fig. 9-1). 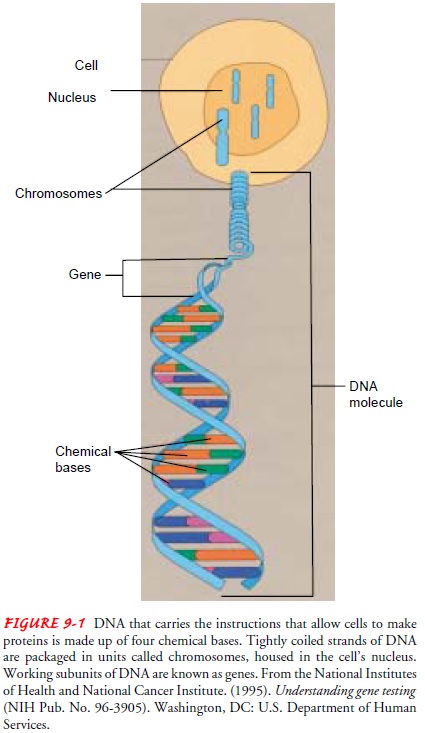 Genes are packaged and arranged in a linear order within chromosomes, which are located in the cell nucleus. In humans,46 chromosomes occur in pairs in all body cells except oocytes (eggs) and sperm, which each contain only 23 chromosomes. Twenty-two pairs of chromosomes, called autosomes, are the same in females and males. The 23rd pair is referred to as the sex chromosomes. A female has two X chromosomes, while a male has one X and one Y chromosome. At conception, each parent normally gives one chromosome of each pair to his or her chil-dren. As a result, children receive half of their chromosomes from their fathers and half from their mothers (Fig. 9-2). 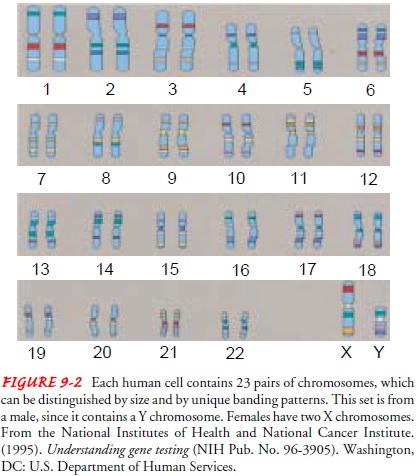 Careful examination of DNA sequences from many individ-uals shows that these sequences have multiple versions in a pop-ulation. These different versions, or sequence variations, are called alleles. Sequences found in many forms are said to be poly-morphic, meaning that there are at least two common forms of a particular gene.

The human body grows and develops through a process of cell di-vision. Mitosis and meiosis, two distinctly different types of cell division, contribute to these processes.

Mitosis is the process of cell division involved in cell growth,differentiation, and repair. During mitosis, the chromosomes of each cell duplicate. The result is two cells, called daughter cells, each containing the same number of chromosomes as the parent cell. The daughter cells are said to be diploid because they con-tain 46 chromosomes in 23 pairs. Mitosis occurs in all cells of the body except oocytes (eggs) and sperm.

Meiosis, in contrast, occurs only in reproductive cells and isthe process by which oocytes and sperm are formed. During meiosis a reduction in the number of chromosomes takes place, resulting in oocytes or sperm that contain half the usual number or 23 chromosomes. Oocytes and sperm are referred to as hap-loid because they contain a single copy of each chromosome,compared to the usual two chromosomes in all other body cells.

During the initial phase of meiosis, paired chromosomes come together in preparation for cell division, portions cross over, and an exchange of genetic material occurs. This event, called re-combination, creates greater diversity in the makeup of oocytes and sperm.

During meiosis, a pair of chromosomes may fail to separate completely, creating a sperm or oocyte that contains either two copies or no copy of a particular chromosome. This sporadic event, called nondisjunction, can lead to either a trisomy or a monosomy. Down syndrome is an example of trisomy. Anindividual with Down syndrome has three number 21 chromo-somes. Turner syndrome is an example of monosomy. Girls who have Turner syndrome usually have a single X chromo-some, causing them to have short stature and infertility (Lash-ley, 1998).

Within each cell, many intricate and complex interactions regu-late and express human genes. Gene structure and function, tran-scription and translation, and protein synthesis are all involved.Alterations in gene structure and function and the process of pro-tein synthesis may influence a person’s health. Changes in gene structure, called mutations, permanently change the sequence of DNA, which in turn can alter the nature and type of proteins made (Fig. 9-3). 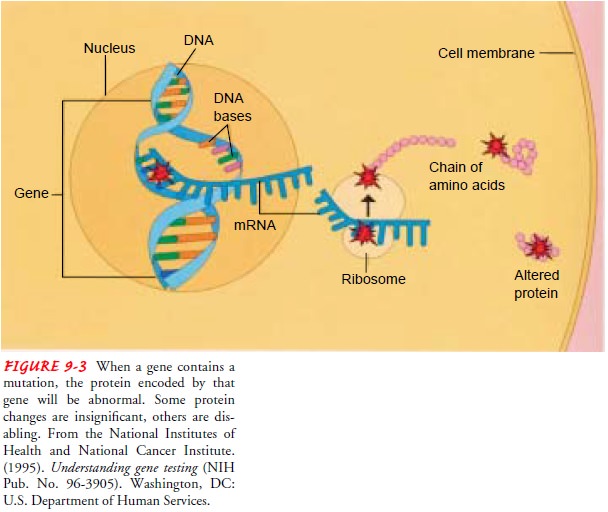 Some gene mutations have no significant effect on the pro-tein product made, while others cause partial or complete changes. How a protein is altered and its importance to proper body functioning determine the mutation’s impact. Gene mu-tations may occur in hormones or enzymes or important pro-tein products, thereby having significant implications for health and disease.

Sickle cell anemia is an example of a genetic condition caused by a small gene mutation that affects protein structure, producing hemoglobin S. A person who inherits two copies of the hemoglobin S gene mutation has the condition sickle cell anemia and experiences the symptoms of severe anemia and thrombotic organ damage resulting from hypoxia (Lashley, 1998; Lea, 2000).

Other gene mutations may be larger, such as a deletion (loss), insertion (addition), duplication (multiplication), or rearrange-ment (translocation) of a longer DNA segment. Duchenne mus-cular dystrophy, an inherited form of muscular dystrophy, is an example of a genetic disorder caused by structural gene mutations such as deletions or duplications in the dystrophin gene. Another type of gene mutation, called a triplet or trinucleotide repeat, involves the expansion of more than the usual number of a triplet repeat sequence within a gene. Myotonic dystrophy, Huntington disease, and fragile X syndrome are examples of conditions caused by this type of gene mutation. 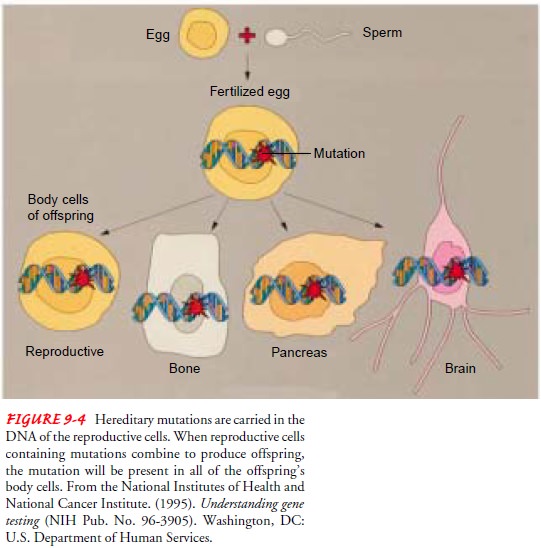 Spontaneous gene mutations take place in individual oocytes or sperm at the time of conception. These mutations are not in-herited in other family members. A person who carries the new “spontaneous” mutation, however, may pass on the gene muta-tion to his or her children. Achondroplasia, Marfan syndrome, and neurofibromatosis type 1 are examples of genetic conditions that may occur in a single family member as a result of sponta-neous mutation.

Acquired mutations take place in somatic cells and involve changes in DNA that occur after conception, during a person’s lifetime. Acquired mutations develop as a result of cumulative changes in body cells other than reproductive cells (Fig. 9-5). So-matic gene mutations are passed on to the daughter cells derived from that particular cell line. 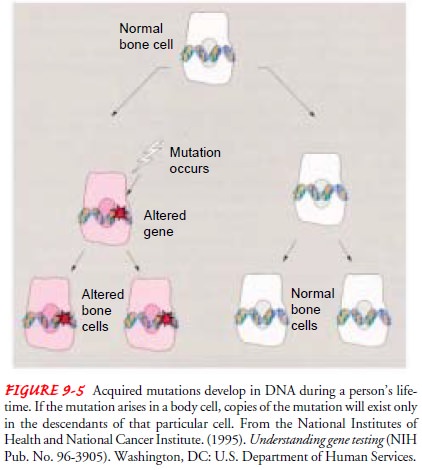 Gene mutations occur in the human body all the time. Cells have built-in mechanisms by which they can recognize mutations in DNA, and in most situations they correct the change before it is passed on by cell division. However, over time, body cells may lose their ability to repair damage from gene mutations, causing an accumulation of genetic changes that may ultimately result in diseases such as cancer and possibly other conditions of aging, such as Alzheimer’s disease (Lashley, 1998).

Sorting out the genetic components of complex conditions (eg, heart disease, diabetes, common cancers, psychiatric disorders) that result from the interaction of environment, lifestyle, and the small effects of many genes is ongoing. New studies of genetic variation in humans are underway to develop a map of common DNA variants.

Genetic variations occur among individuals of all populations. Polymorphisms and single nucleotide polymor-phisms (SNPs, pronounced “snips”) are the terms used for com-mon genetic variations that occur most frequently throughout the human genome. Some SNPs may contribute directly to a trait or disease expression by altering function. SNPs are becoming in-creasingly important for the discovery of DNA sequence varia-tions that affect biologic function. Such knowledge will allow clinicians to subclassify diseases and adapt therapies to the indi-vidual patient (Collins, 1999; Collins & McKusick, 2001). For example, a polymorphism or SNP can alter a protein or enzyme activity and can thus affect drug efficacy and safety when it oc-curs in proteins that are targets of medication regimens or that are involved in drug transport or drug metabolism (McCarthy & Hilfiker, 2000; Schafer & Hawkins, 1998).