Introduction: The slip and creep in the belt or rope drives is a common phenomenon, in the transmission of motion or power between two shafts. The effect of slip is to reduce the velocity ratio of the drive. In precision machine, in which a definite velocity ratio is importance (as in watch mechanism, special purpose machines..etc), the only positive drive is by means of gears or toothed wheels.

Friction Wheels: Kinematiclly, the motion and power transmitted by gears is equivalent to that transmitted by friction wheels or discs in contact with sufficient friction between them. In order to understand motion transmitted by two toothed wheels, let us consider the two discs placed together.

When one of the discs is rotated, the other disc will be rotate as long as the tangential force exerted by the driving disc does not exceed the maximum frictional resistance between the two discs. But when the tangential force exceeds the frictional resistance, slipping will take place between the two discs. Thus the friction drive is not positive a drive, beyond certain limit.

Gears are machine elements that transmit motion by means of successively engaging teeth. The gear teeth act like small levers. Gears are highly efficient (nearly 95%) due to primarily rolling contact between the teeth, thus the motion transmitted is considered as positive.

Gears essentially allow positive engagement between teeth so high forces can be transmitted while still undergoing essentially rolling contact. Gears do not depend on friction and do best when friction is minimized.

Gears are used to change speed in rotational movement. 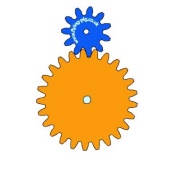 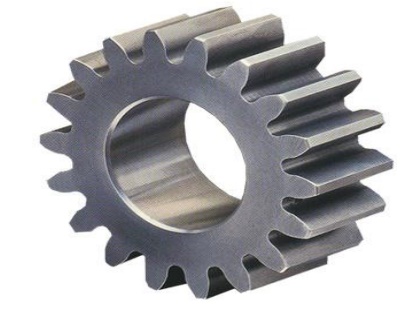 A gear or cogwheel is a rotating machine part having cut teeth, or cogs, which mesh with another toothed part to transmit torque. Geared devices can change the speed, torque, and direction of a power source. Gears almost always produce a change in torque, creating a mechanical advantage, through their gear ratio, and thus may be considered a simple machine. The teeth on the two meshing gears all have the same shape.[1] Two or more meshing gears, working in a sequence, are called a gear train or a transmission. A gear can mesh with a linear toothed part, called a rack, thereby producing translation instead of rotation.

The gears in a transmission are analogous to the wheels in a crossed belt pulley system. An advantage of gears is that the teeth of a gear prevent slippage.

When two gears mesh, if one gear is bigger than the other, a mechanical advantage is produced, with the rotational speeds, and the torques, of the two gears differing in proportion to their diameters.

In transmissions with multiple gear ratios—such as bicycles, motorcycles, and cars—the term "gear" as in "first gear" refers to a gear ratio rather than an actual physical gear. The term describes similar devices, even when the gear ratio is continuous rather than discrete, or when the device does not actually contain gears, as in a continuously variable transmission.

Pitch point divides the line between the line of centers and its positiond ecides the velocity ratio of the two teeth. The above expression is the fundamental law of gear-tooth action. 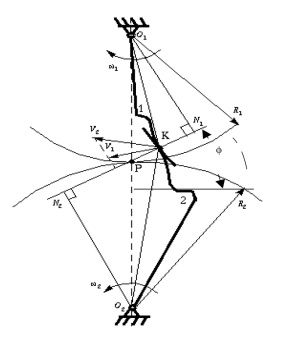 The curve most commonly use d for gear-tooth profiles is the involute of a circle. This involute curve is the path traced by a point on a line as the line Rolls without slipping on the circumference of a circle. It may also be defined asapathtraced  by the end of a string, which is originally wrapped on a circle when the string is un wrapped from the circle. The circle from which the involute is derived is called the base circle 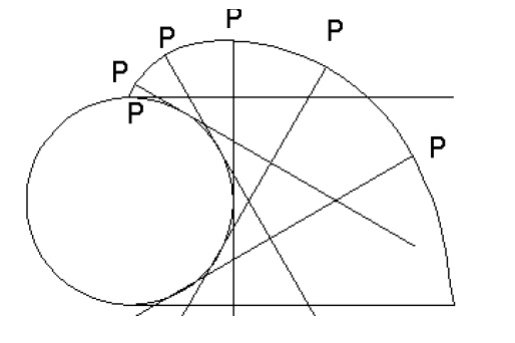 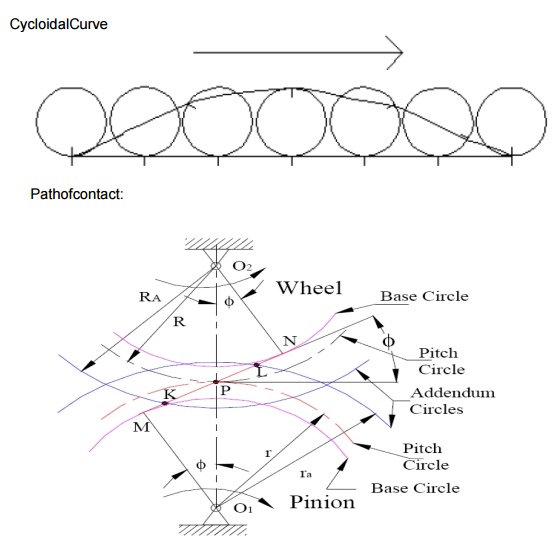 The contact ratio or the number of pairs of teeth in contact is defined as the ratio of the length of the arc of contact to the circular pitch. 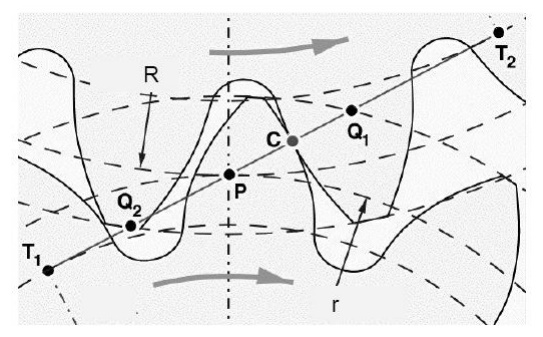 The tooth tip of the pinion will then undercut the tooth on the wheel at the root and damages part of the involute profile. This effect is known as interference, and occurs when the teeth are being cut and weakens the tooth at its root.

In general, the phenomenon, when the tip of tooth undercuts the root on its mating gear is known as interference.

Similarly, if the radius of the addendum circles of the wheel increases beyond O2M, then the tip of tooth on wheel will cause interference with the tooth on pinion. The points M and N are called interference points.

Interference may be avoided if the path of the contact does not extend beyond interference points. The limiting value of the radius of the addendum circle of the pinion is O1N and of the wheel is O2M.

The interference may only be prevented, if the point of contact between the two teeth is always on the involute profiles and if the addendum circles of the two mating gears cut the common tangent to the base circles at the points of tangency.

When interference is just prevented, the maximum length of path of contact is MN.

2.Under cut of the radial flank of the pinion.

3.Centre distance may be increased.  It leads to increase in pressure angle.

4. By tooth correction, the pressure angle, centre distance and base circles remain unchanged, but tooth thickness of gear will be greater than the pinion tooth thickness.

Minimum number of teeth on the pinion avoid Interference

The pinion turns clockwise and drives the gear as shown in Figure.

Points M and N are called interference points. i.e., if the contact takes place beyond M and N, interference will occur. 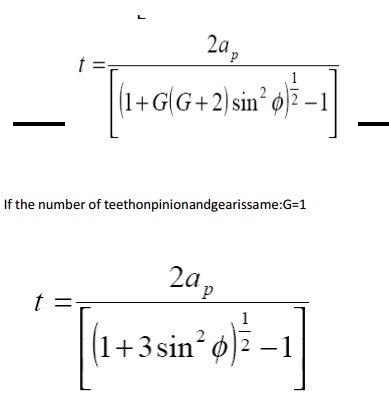 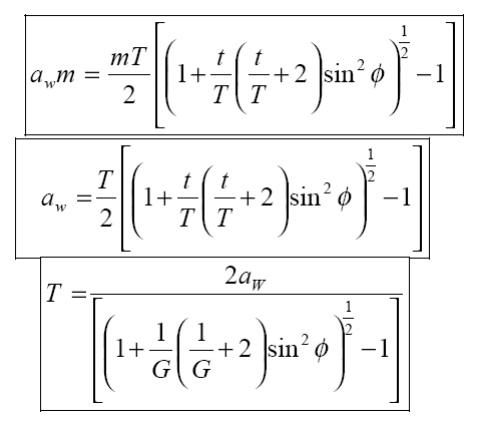 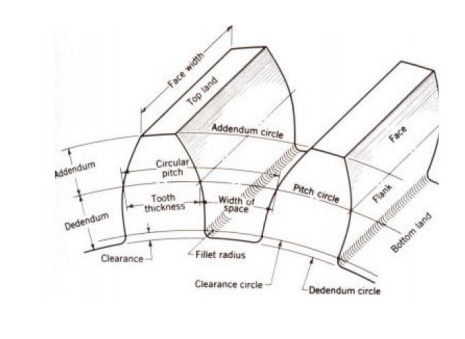 Addendum: The radial distance between the Pitch Circle and the top of the teeth.

Arc of Action: Is the arc of the Pitch Circle between the beginning and the end of the engagement of a given pair of teeth.

Arc of Approach: Is the arc of the Pitch Circle between the first point of contact of the gear teeth and the Pitch Point.

Arc of Recession: That arc of the Pitch Circle between the Pitch Point and the last point of contact of the gear teeth.

Base Circle: The circle from which is generated the involute curve upon which the tooth profile is based.

Center Distance: The distance between centers of two gears.

Chordal Addendum: The distance between a chord, passing through the points where the Pitch Circle crosses the tooth profile, and the tooth top.

Chordal Thickness: The thickness of the tooth measured along a chord passing through the points where the Pitch Circle crosses the tooth profile.

Circular Thickness: The thickness of the tooth measured along an arc following the Pitch Circle

Clearance: The distance between the top of a tooth and the bottom of the space into which it fits on the meshing gear.

Contact Ratio: The ratio of the length of the Arc of Action to the Circular Pitch.

Dedendum: The radial distance between the bottom of the tooth to pitch circle.

Face: The working surface of a gear tooth, located between the pitch diameter and the top of the tooth.

Face Width: The width of the tooth measured parallel to the gear axis.

Flank: The working surface of a gear tooth, located between the pitch diameter and the bottom of the teeth

Gear: The larger of two meshed gears. If both gears are the same size, they are both called "gears".

Land: The top surface of the tooth.

Pitch Circle: The circle, the radius of which is equal to the distance from the center of the gear to the pitch point.

Pressure Angle: Angle between the Line of Action and a line perpendicular to the Line of Centers.

Profile Shift: An increase in the Outer Diameter and Root Diameter of a gear, introduced to lower the practical tooth number or acheive a non-standard Center Distance.

Ratio: Ratio of the numbers of teeth on mating gears.

Root Circle: The circle that passes through the bottom of the tooth spaces.

Root Diameter: The diameter of the Root Circle.

Working Depth: The depth to which a tooth extends into the space between teeth on the mating gear.

RACK AND PINION: The rack and pinion is used to convert between rotary and linear motion. The rack is the flat, toothed part, the pinion is the gear. Rack and pinion can convert from rotary to linear of from linear to rotary. The diameter of the gear determines the speed that the rack moves as the pinion turns. Rack and pinions are commonly used in the steering system of cars to convert the rotary motion of the steering wheel to the side to side motion in the wheels. Rack and pinion gears give a positive motion especially compared to the friction drive of a wheel in tarmac. In the rack and pinion railway a central rack between the two rails engages with a pinion on the engine allowing the train to be pulled up very steep slopes.

WORM GEAR: A worm is used to reduce speed. For each complete turn of the worm shaft the gear shaft advances only one tooth of the gear. In this case, with a twelve tooth gear, the speed is reduced by a factor of twelve. Also, the axis of rotation is turned by 90 degrees. Unlike ordinary gears, the motion is not reversible, a worm can drive a gear to reduce speed but a gear cannot drive a worm to increase it. As the speed is reduced the power to the drive increases correspondingly. Worm gears are a compact, efficient means of substantially decreasing speed and increasing power. Ideal for use with small electric motors.

Compound Gear Trains – A compound gear train is a train where at least one shaft carries more than one gear. The train ratio is given by the ratio mV = (product of number of teeth on driver gears)/(product of number of teeth on driven gears). A common approach to the design of compound gear trains is to first determine the number of gear reduction steps needed (each step is typically smaller than 10:1 for size purposes). Once this is done, determine the desired ratio for each step, select a pinion size, and then calculate the gear size.

·        If the axis of the shafts over which the gears are mounted are moving relative to a fixed axis , the gear train is called the epicyclic gear train. 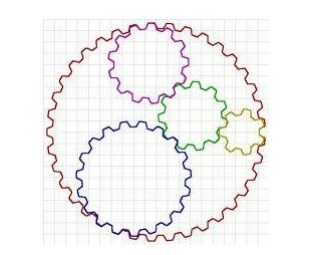 ·        To enable the rear wheels to revolve at different speeds when negotiating a curve.

·        To enable the rear wheels to revolve at the same speeds when going straight. 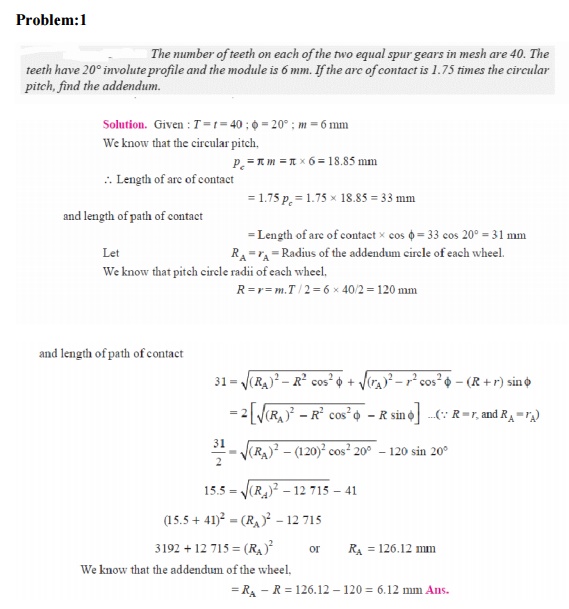