Gear Classification: Gears may be classified according to the relative position of the axes of revolution. The axes may be

1.    Spur gears: Spur gears are the most common type of gears. They have straight teeth, and are mounted on parallel shafts. Sometimes, many spur gears are used at once to create very large gear reductions. Each time a gear tooth engages a tooth on the other gear, the teeth collide, and this impact makes a noise. It also increases the stress on the gear teeth. To reduce the noise and stress in the gears, most of the gears in your car are helical.

·            Limitations: Spur gears generally cannot be used when a direction change between the two shafts is required.

2.    Parallel helical gears: The teeth on helical gears are cut at an angle to the face of the gear. When two teeth on a helical gear system engage, the contact starts at one end of the tooth and gradually spreads as the gears rotate, until the two teeth are in full engagement.

This gradual engagement makes helical gears operate much more smoothly and quietly than spur gears. For this reason, helical gears are used in almost all car transmission.

Because of the angle of the teeth on helical gears, they create a thrust load on the gear when they mesh. Devices that use helical gears have bearings that can support this thrust load.

One interesting thing about helical gears is that if the angles of the gear teeth are correct, they can be mounted on perpendicular shafts, adjusting the rotation angle by 90 degrees.

Helical gears to have the following differences from spur gears of the same size:

o  Tooth strength is greater because the teeth are longer,

Rack and pinion (The rack is like a gear whose axis is at infinity.): Racks are straight gears that are used to convert rotational motion to translational motion by means of a gear mesh. (They are in theory a gear with an infinite pitch diameter). In theory, the torque and angular velocity of the pinion gear are related to the Force and the velocity of the rack by the radius of the pinion gear, as is shown.

Gears for connecting intersecting shafts: Bevel gears are useful when the direction of a shaft's rotation needs to be changed. They are usually mounted on shafts that are 90 degrees apart, but can be designed to work at other angles as well.

The teeth on bevel gears can be straight, spiral or hypoid. Straight bevel gear teeth actually have the same problem as straight spur gear teeth, as each tooth engages; it impacts the corresponding tooth all at once.

Just like with spur gears, the solution to this problem is to curve the gear teeth. These spiral teeth engage just like helical teeth: the contact starts at one end of the gear and progressively spreads across the whole tooth.

On straight and spiral bevel gears, the shafts must be perpendicular to each other, but they must also be in the same plane. The hypoid gear, can engage with the axes in different planes. This feature is used in many car differentials. The ring gear of the differential and the input pinion gear are both hypoid. This allows the input pinion to be mounted lower than the axis of the ring gear.

Neither parallel nor intersecting shafts: Helical gears may be used to mesh two shafts that are not parallel, although they are still primarily use in parallel shaft applications. A special application in which helical gears are used is a crossed gear mesh, in which the two shafts are perpendicular to each other. 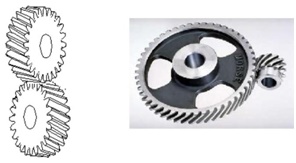 Worm and worm gear: Worm gears are used when large gear reductions are needed. It is common for worm gears to have reductions of 20:1, and even up to 300:1 or greater.

Many worm gears have an interesting property that no other gear set has: the worm can easily turn the gear, but the gear cannot turn the worm. This is because the angle on the worm is so shallow that when the gear tries to spin it, the friction between the gear and the worm holds the worm in place.

This feature is useful for machines such as conveyor systems, in which the locking feature can act as a brake for the conveyor when the motor is not turning. One other very interesting usage of worm gears is in the Torsen differential, which is used on some high-performance cars and trucks 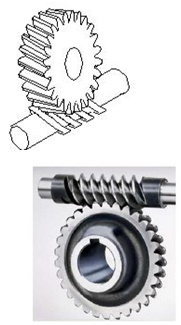