The GST Council will oversee the implementation of the GST.

The GST Council will oversee the implementation of the GST. But the Central  Board  of  Excise  and  Customs is  responsible   for   administration   of the CGST and IGST Acts. The Council makes recommendations on rate of GST, apportionment of IGST, exemptions, model GST laws, etc. 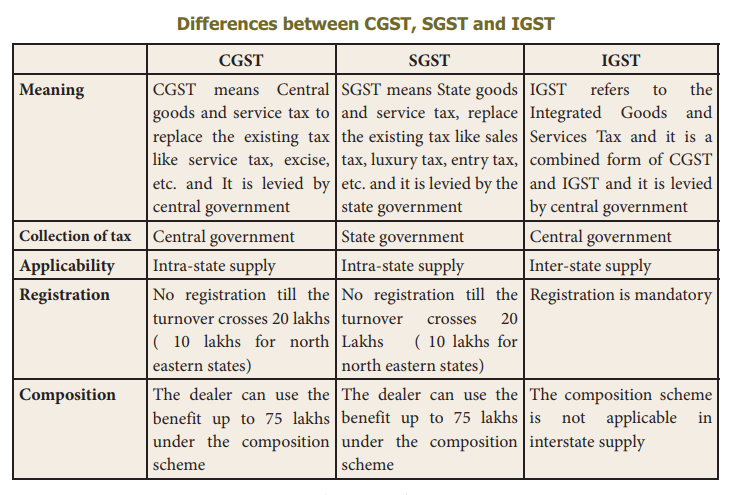 Apart from the GST Council, GST Secretariat was formed with the following officials

i. The Secretary (Revenue) will be appointed as the Ex-officio Secretary to the GST Council.

ii. The Chairperson, Central Board of Excise and Customs (CBEC), will be a permanent invitee (non-voting).

iii. One post of Additional Secretary to the GST, and

iv. Four posts of Commissioner in the GST Council Secretariat will also be created.

ii.               To eliminate the cascading effect of taxes, GST allows set-off of prior taxes for the same transactions as input tax credit.

iii.               To boost Indian exports, the GST already collected on the inputs will be refunded and thus there will be no tax on all exports.

vi.               To provide online facilities for payment of taxes and submission of forms. Goods and Services Network (GSTN), a robust Information Technology system has been created for the operation of GST.

A. To the Society and country

1.        Unified common national market will attract more foreign investment. GST has integrated the economy of all States and Union Territories.

3.        It will boost manufacturing, export, GDP leading to economic growth through increase in economic activity.

4.        Creation of more employment opportunities which will result in poverty eradication.

5.        It will bring more tax compliance (more tax payers) and increase revenue to the Governments.

6.        It is transparent and will improve India’s ranking in the ‘Ease of Doing Business’ in the world.

7.        Uniform rates of tax will reduce tax evasion and rate arbitrage between States.

B. To Business Community

2.        Input tax credit will reduce cascading effect of taxes. Reduction in average tax burden will encourage manufacturers and help “Make in India” campaign and make India as a manufacturing hub.

5.        All interactions will be through common GSTN portal and will ensure corruption free administration.

6.        Uniform prices throughout the country. Expansion of business to all states is made easy.

1.        Input tax credit allowed will lower the prices to the consumers.

2.        All small retailers will get exemption and purchases from them will cost less for the consumers.

Besides the above listed advantages the GST is also criticized for many reasons. The disadvantages of GST are stated below:

1.        Several Economists says that GST in India would impact negatively on the real estate market. It would add up to 8 percent to the cost of new homes and reduce demand by about 12 percent.

2.        Another criticism is that CGST, SGST are nothing but new names for Central Excise/Service Tax, VAT and CST. Hence, there is no major reduction in the number of tax layers.

3.        A number of retail products currently have only four percent tax on them. After GST, garments and clothes could become more expensive.

4.        The aviation industry would be affected. Service taxes on airfares currently range from six to nine percent. With GST, this rate will surpass fifteen percent and effectively double the tax rate.

5.        Adoption and migration to the new GST system would involve teething troubles and learning for the entire ecosystem.