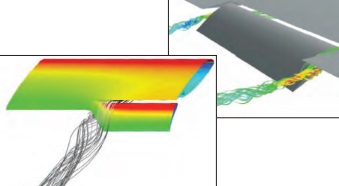 This research is part of an innovative effort to use hyperelastic materials to produce flexible and seamless aircraft structures that reduce drag and minimize acoustic noise. Hyperelastic materials, such as rubber, have a non-linear stress-strain relationship, which often complicates the modeling process. Researchers are investigating the properties of hyperelastic materials and developing improved finite element analysis (FEA) models. This technology has been shown to improve aircraft aerodynamic efficiency and reduce airport-area noise generated during takeoffs and landings.

Looking ahead: The team will fine-tune the modeling in 2014 by comparing the predicted output to an actual bubble test of the material.

Quieter: Novel wing flap reduces noise associated with takeoffs and landings both in the aircraft cabin and on the ground.