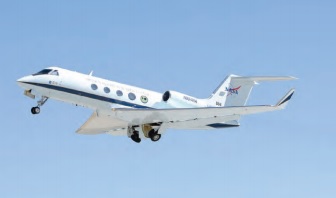 The ACTE experimental flight research project is investigating whether advanced flexible trailing-edge wing flaps can both improve aircraft aerodynamic efficiency and reduce noise associated with takeoffs and landings. The experiment involves replacing the conventional aluminum wing Fowler flaps of a Gulfstream III (G-III) research testbed aircraft with advanced, shape-changing, composite material flaps that form continuous bendable surfaces. The primary goal of the experiment is to collect flight data about the integration and reliability of the composite wing flaps.

Work to date: The G-III has been converted and instrumented into a test platform. The flexible structures have been developed and tested for aircraft applications.

Looking ahead: Flight testing is scheduled to begin in fall 2014. The new flexible wing flaps have arrived at Armstrong, and engineers are preparing them for ground vibration testing, fit checks, and eventual installation. Ultimately, the goal is to work toward developing a wing that incorporates this design from the start, rather than flap integration as has occurred to date.

Economical: Reduces drag and increases fuel efficiency through the use of an advanced compliant structure