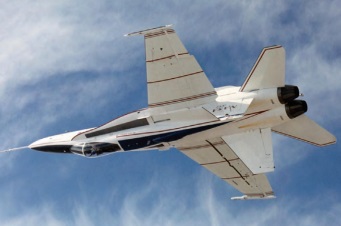 This control methodology utilizes real-time measurements of vehicle structural load to actively respond to and protect against vehicle damage due to structural overload. The innovation utilizes critical point load feedback within an optimal control allocation architecture that constrains the load at those critical points while still producing the control response commanded by a pilot. Specifically, the technology monitors the loads at critical control points and shifts the loading away from points at or near their limits.

Looking ahead: Future tests will employ more advanced and unique sensor technologies, such as fiber optic strain sensors, which will improve both the robustness of the approach as well as the ability to measure the load throughout the vehicle structure. This technology could open the door to truly novel approaches to vehicle and control system design, such as adaptive controls and reduced structural design margins.

Effective: Identifies the optimum control surface usage for a given maneuver for both performance and structural loading