Functional ovarian cysts are not neoplasms, but, rather,anatomic variations that arise as a result of normal ovarian function.

Functional ovarian cysts are not neoplasms, but, rather,anatomic variations that arise as a result of normal ovarian function. They may present as an asymptomatic adnexalmass or become symptomatic, requiring evaluation and possibly treatment.

When an ovarian follicle fails to rupture during follic-ular maturation, ovulation does not occur, and a follicularcyst may develop. This process, by definition, involves alengthening of the follicular phase of the cycle, with resul-tant transient secondary amenorrhea. Follicular cysts are lined by normal granulosa cells, and the fluid contained in them is rich in estrogen.

A follicular cyst becomes clinically significant if it is large enough to cause pain or if it persists beyond one men-strual interval. For poorly understood reasons, the granulosa cells lining the follicular cyst persist through the time when ovulation should have occurred and continue to enlarge through the second half of the cycle. A cyst may enlarge beyond 5 cm and continue to fill with follicular fluid from the thickened granulosa cell layer. Symptoms associated with a follicular cyst may include mild to moderate uni-lateral lower abdominal pain and alteration of the menstrual interval. The latter may be the result of both failed sub-sequent ovulation and bleeding stimulated by the large amount of estradiol produced in the follicle. This hormonal environment, along with the lack of ovulation, overstimu-lates the endometrium and causes irregular bleeding. Pelvic examination findings may include unilateral tenderness with a palpable, mobile, cystic adnexal mass.

Pelvic ultrasonography is often warranted in reproduc-tive-age patients who have cysts larger than 5 cm in diame-ter. Ultrasound characteristics of benign tumors include unilocular simple cyst without evidence of thick septa-tions, soft tissue elements, or evidence of internal or exter-nal excrescences (Fig. 46.1). For many patients, however, ultrasound confirmation is not required. Instead, the patient may be reassured and followed with a repeat pelvic examination in about 6 weeks, once pregnancy has been ruled out. 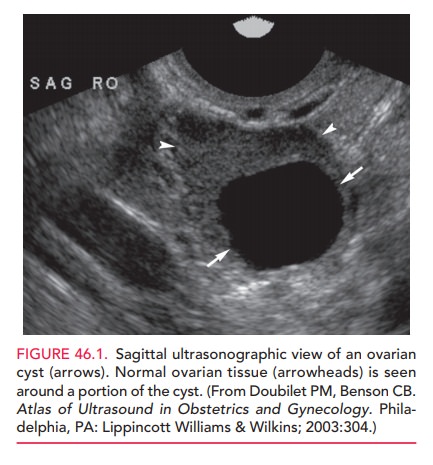 Most follicular cysts spontaneously resolve during this time. Alternatively, an estrogen- and progesterone-containing oral contraceptive may be given to suppress gonadotropin stimulation of the cyst. Although this prac-tice has not been shown to “shrink” the existing follicu-lar cyst, it may suppress the development of a new cyst and permit resolution of the existing problem. If the cyst per-sists despite expectant management, another type of cyst or neoplasm should be suspected and further evaluated by imaging studies and/or surgery.

On occasion, rupture of a follicular cyst may cause acute pelvic pain. Because release of follicular fluid into the peritoneum produces only transient symptoms, surgical intervention is rarely necessary.

Corpus luteum cyst is the other common type of func-tional ovarian cyst, designated a cyst rather than simply a cor-pus luteum when its diameter exceeds about 3 cm. It is relatedto the postovulatory (i.e., progesterone-dominant) phase of the menstrual cycle. Two variations of corpus luteum cysts are encountered. The first is a slightly enlarged cor-pus luteum, which may continue to produce progesterone for longer than the usual 14 days. Menstruation is delayed from a few days to several weeks, although it usually occurs within 2 weeks of the missed period. Persistent cor-pus luteum cysts are often associated with dull lower-quadrant pain. This pain and a missed menstrual period are the most common complaints associated with persis-tent corpus luteum cysts. Pelvic examination usually dis-closes an enlarged, tender, cystic, or solid adnexal mass. Because of the triad of missed menstrual period, unilateral lower-quadrant pain, and adnexal enlargement, ectopic pregnancy is often considered in the differential diagno-sis. A negative pregnancy test eliminates this possibility, whereas a positive pregnancy test mandates further evalu-ation regarding the location of the pregnancy. Patients with recurrent persistent corpus luteum cysts may benefit from cyclic oral contraceptive therapy.

The second less-common type of corpus luteum cyst is the rapidly enlarging luteal-phase cyst into which there is spontaneous hemorrhage. Sometimes called the corpushemorrhagicum, this hemorrhagic corpus luteum cyst mayrupture late in the luteal phase, resulting in the following clinical picture: a patient not using oral contraceptives, with regular periods, who presents with acute pain late in the luteal phase. Some patients present with evidence of hemo-peritoneum as well as hypovolemia and require surgical resection of the bleeding cyst. In others, the acute pain and blood loss are self-limited. These patients may be managed with mild analgesics and reassurance. Patients at risk for repetitive hemorrhagic corpus luteum cysts include those who are taking anticoagulation medication and those who have inherent bleeding disorders. This process may be the hallmark to initiate an investigation for an inherent bleed-ing disorder.

The least common functional cyst is the theca luteincyst, associated with pregnancy and usually bilateral. Theyare more common in multiple gestations, trophoblastic disease, and also with ovulation induction with clomiphene and human menopausal gonadotropin/human chorionic gonadotropin (hCG). They may become large and are multicystic, but also regress spontaneously in most cases without intervention.