Although most ovarian enlargements in the reproductive-age group are functional cysts, about 25% prove to be nonfunctionalovarian neoplasms.

Although most ovarian enlargements in the reproductive-age group are functional cysts, about 25% prove to be nonfunctionalovarian neoplasms. In the reproductive-age group, 90% ofthese neoplasms are benign, whereas the risk of malignancy rises to approximately 25% when postmenopausal patients are also included. Thus, ovarian masses in older patients and in reproductive patients who show no response to oral con-traceptive treatment are of special concern. Unfortunately, unless the mass is particularly large or becomes symp-tomatic, these masses may remain undetected for some time. Many ovarian neoplasms are first discovered at the time of routine pelvic examination.

Ovarian neoplasms are usually categorized by the cell type of origin:

·            Germ cell tumors, which include the most commonovarian neoplasm in reproductive-age women, the benign cystic teratoma or dermoid

The classification of ovarian tumors by cell line of origin is presented in Box 46.1.

The exact cell source for the development of epithelial cell tumors of the ovary is unclear; however, the cells are characteristic of typ-ical glandular epithelial cells. Evidence exists to suggest thatthese cells are derived from mesothelial cells lining the peri-toneal cavity. Because the müllerian duct-derived tissue becomes the female genital tract by differentiation of the mesothelium from the gonadal ridge, it is hypothesized that these tissues are also capable of differentiating into glandu-lar tissue. The more common epithelial tumors of the ovary are grouped into serous, mucinous, and endometrioid neoplasms, as shown in Box 46.2.

The most common epithelial cell neoplasm is the serous cystadenoma (Fig. 46.2). Seventy percent of seroustumors are benign; approximately 10% have intraepithelial cellular characteristics, which suggest that they are of low malignant potential; and the remaining 20% are frankly malignant by both histologic criteria and clinical behavior. 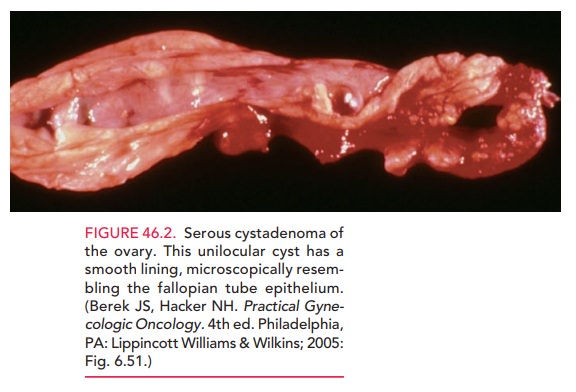 Treatment of serous tumors is surgical, because of the relatively high rate of malignancy. In the younger patient with smaller tumors, an attempt can be made to perform an ovarian cystectomy to try to minimize the amount of ovar-ian tissue removed. For large, unilateral serous tumors in

Histologic Classification of All Ovarian Neoplasms

Histologic Classification of the Common Epithelial Tumors of the Ovary

Endometrioid tumors (similar to adenocarcinomas in the endometrium)

young patients, unilateral oophorectomy with preservation of the contralateral ovary is indicated to maintain fertility. In patients past reproductive age, bilateral oophorectomy along with hysterectomy may be indicated, not only because of the chance of future malignancy, but because of the increased risk of a similar occurrence in the con-tralateral ovary.

The mucinous cystadenoma is the second most common epithelial cell tumor of the ovary. The malig-nancy rate of 15% is lower than that for serous tumors. These cystic tumors can become large, sometimes filling the entire pelvis and extending into the abdominal cavity (Fig. 46.3). Ultrasound assessment will often reveal multi-locular septations. Surgery is the treatment of choice. 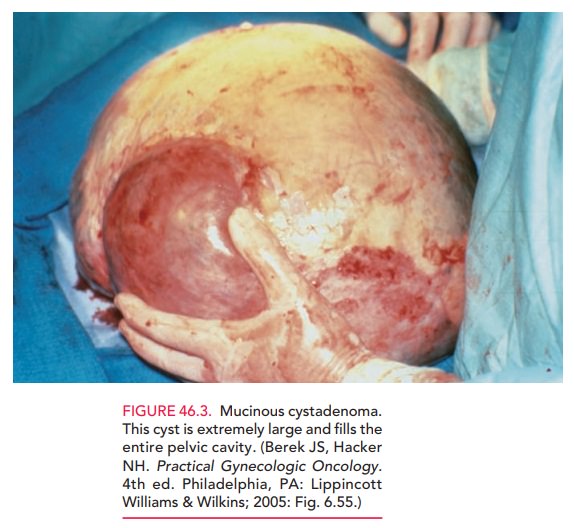 A third type of benign epithelial neoplasm is the endometrioid tumor. Most benign endometrioid tumorstake the form of endometriomas, which are cysts lined by well-differentiated, endometrial-like glandular tissue. For further discussion of this neoplasm, see “Malignant Ovarian Neoplasms,” later.

The Brenner cell tumor is an uncommon benign epithelial cell tumor of the ovary. This tumor is usually described as a solid ovarian tumor because of the large amount of stroma and fibrotic tissue that surrounds the epithelial cells. It is more common in older women, and occasionally occurs in association with mucinous tumors of the ovary. When discovered as an isolated tumor of the ovary, it is relatively small compared with the large size often attained by the serous and especially by the mucinous cystadenomas. It is rarely malignant.

Germ cell tumors are derived from the primary germ cells. Thetumors arise in the ovary and may contain relatively differ-entiated structures, such as hair or bone. The most common tumor found in women of all ages is the benign cystic ter-atoma, also called a dermoid cyst or dermoid (Fig. 46.4).Eighty percent occur during the reproductive years, with a median age of occurrence of 30 years. However, in children and adolescents, mature cystic teratomas account for about one-half of benign ovarian neoplasms. Dermoids may contain differentiated tissue from all three embryonic germ layers (ectoderm, mesoderm, and endoderm). The most common elements found are of ectodermal origin, primar-ily squamous cell tissue such as skin appendages (sweat, seba-ceous glands) with associated hair follicles and sebum. It is because of this predominance of dermoid derivatives that the term “dermoid” is used. Other constituents of dermoids include central nervous system tissue, cartilage, bone, teeth, and intestinal glandular elements, most of which are found in well-differentiated form. One unusual variant is the struma ovarii, in which functioning thyroid tissue is found. 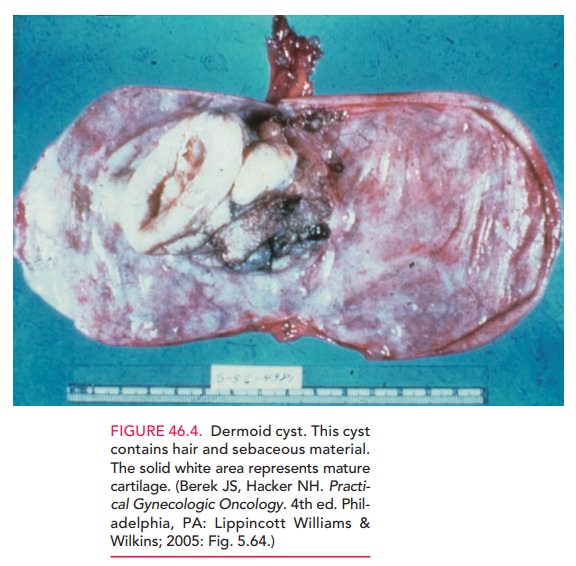 A dermoid cyst is frequently encountered as an asymp-tomatic, unilateral cystic adnexal mass that is mobile and nontender.

This tumor often has a high fat content that makes it more readily identified by computer tomography (CT) evaluation, as well as giving it a more buoyant ten-dency in the pelvis, resulting in a relatively high rate of ovarian torsion (15%), in comparison with other types of neoplasms.

Treatment of benign cystic teratomas is necessarily sur-gical, even though the rate of malignancy is <1%. Surgical removal is required because of the possibility of ovarian tor-sion and rupture, resulting in intense chemical peritonitis and a potential surgical emergency. Between 10% and 20% of these cysts are bilateral, underscoring the need for exam-ination of the contralateral ovary at the time of surgery.

Stromal cell tumors of the ovary are usually considered solid tumors and are derived from specialized sex cord stroma of the developing gonad. These tumors may develop along a pri-marily female cell type into granulosa theca cell tumors, or into a primarily male gonadal type of tissue, known as Sertoli–Leydig cell tumors. Both of these tumors arereferred to as functioning tumors because of their hormone production. Granulosa theca cell tumors primarily produceestrogenic components and may be manifest in patients through feminizing characteristics, and Sertoli–Leydig cell tumors produce androgenic components, which may contribute to hirsutism or vir-ilizing symptoms. These neoplasms occur with approximately equal frequency in all age groups, including pediatric patients.

The ovarian fibroma is the result of collagen produc-tion by spindle cells. These tumors account for 4% of ovarian tumors and are most common during middle age. It is unlike other stromal cell tumors in that it does not secrete sex steroids. It is usually a small, solid tumor with a smooth surface and occasionally is clinically mis-leading because ascites are present. The combination of benign ovarian fibroma coupled with ascites and right pleural effusion has historically been referred to as Meigssyndrome.

The following are the key points that can be made regarding benign ovarian neoplasms:

·      They are more common than malignant tumors of the ovary in all age groups.

·      The risk for malignant transformation increases with increasing age.

·      They warrant surgical treatment because of their poten-tial for malignancy or torsion.

·      Preoperative assessment may be assisted by the use of pelvic imaging techniques such as ultrasound.

·      Surgical treatment may be conservative for benign tumors, especially if future reproduction is desired. 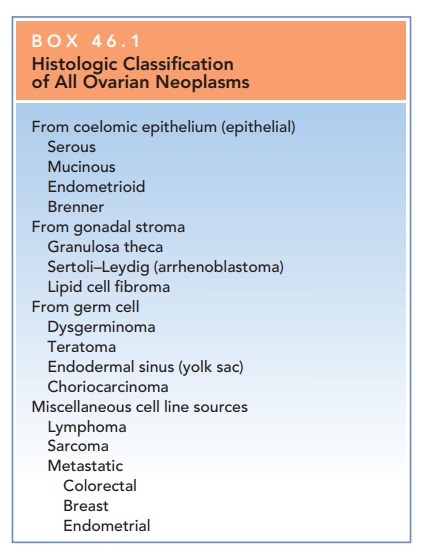 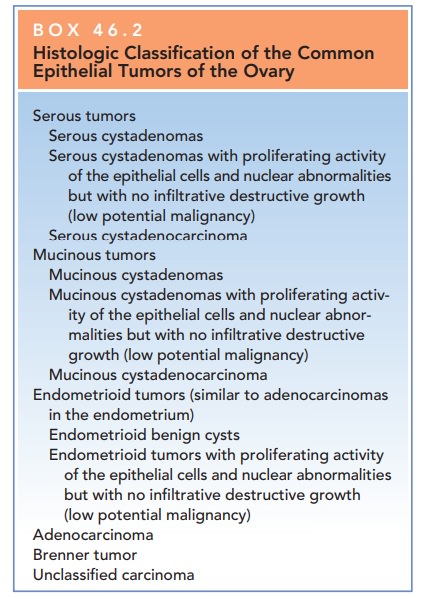