The afferent fiber systems terminate in cir-cumscribed areas of the cortex; in turn, cor-ticofugal fibers of different cortical areas ex-tend to specific portions of the cerebellar nuclei. The functional organization of the cerebellum is based on these fiber projec-tions. Studies in experimental animals (rab-bits, cats, monkeys) have cast light on these relationships.

Fiber Projection (A, B) 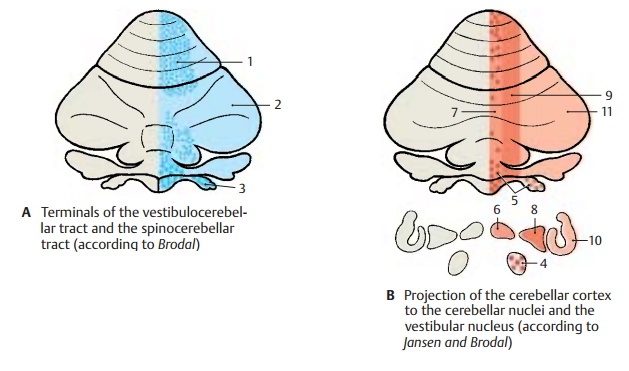 The tripartition is also obvious from the pro-jection of corticofugal axons to the cere-bellar nuclei. In the vestibular nuclei (B4) terminate fibers from the vermis (anterior lobe, pyramid, uvula, and nodulus) and the flocculus (B5). In the fastigial nucleus (B6) terminate fibers from the entire vermis (B7). The emboliform nucleus and globose nucleus (a complex in experimental ani-mals) (B8) receive the fibers of the interme-diate zone (B9) and, finally, in the dentate nucleus (B10) terminate the fiber masses of the hemisphere (B11).

The pathways terminate following a set pat-tern in which lower limb, trunk, upper limb, and head area are arranged one after the other. Thissomatotopic organization has been confirmed by stimulation experi-ments. Electrical stimulation of the cerebel-lar cortex in a decerebrate animal resulted in contractions and tonic changes in the ex-tensor and flexor muscles of the limbs, in conjugate eye movements, and in contrac-tions of the facial and cervical muscles (C) (the figure shows upper and lower surfaces of the cerebellum projected onto the same plane). 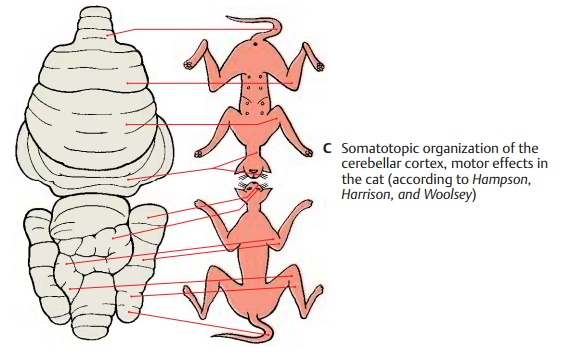 Similar results were obtained by tactile stimulation of various body parts and simultaneous electrical recording of the re-sulting potentials in the cerebellar cortex (evoked potentials) (D). In addition, localiza-tion of the potentials demonstrated the ipsi-lateral representation of the body half in the anterior lobe and simple lobule (D12) and the bilateral representation in the parame-dian lobule (D13). 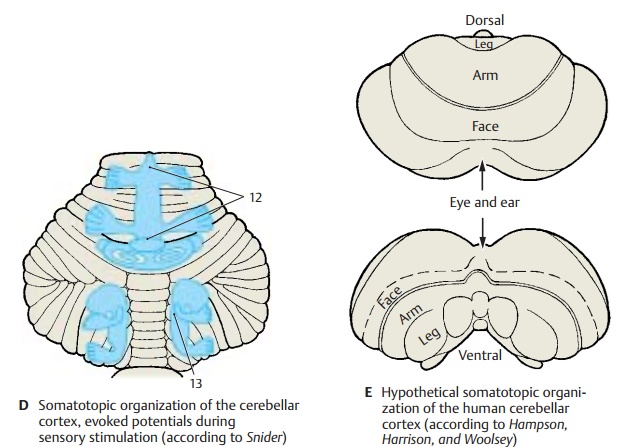