Function of the Cerebellum in Overall Motor Control

The nervous system uses the cerebellum to coordinate motor control functions at three levels, as follows:

Function of the Cerebellum in Overall Motor Control

The nervous system uses the cerebellum to coordinate motor control functions at three levels, as follows:

1.The vestibulocerebellum. This consists principally of the small flocculonodular cerebellar lobes (that lie under the posterior cerebellum) and adjacent portions of the vermis. It provides neural circuits for most of the body’s equilibrium movements.

2.The spinocerebellum. This consists of most of the vermis of the posterior and anterior cerebellum plus the adjacent intermediate zones on both sides of the vermis. It provides the circuitry for coordinating mainly movements of the distal portions of the limbs, especially the hands and fingers.

3.The cerebrocerebellum. This consists of the large lateral zones of the cerebellar hemispheres, lateral to the intermediate zones. It receives virtually all its input from the cerebral motor cortex and adjacent premotor and somatosensory cortices of the cerebrum. It transmits its output information in the upward direction back to the brain, functioning in a feedback manner with the cerebral cortical sensorimotor system to plan sequential voluntary body and limb movements, planning these as much as tenths of a second in advance of the actual movements. This is called development of “motor imagery” of movements to be performed.

We still must ask the question, what role does the vestibulocerebellum play in equilibrium that cannot be provided by other neuronal machinery of the brain stem? A clue is the fact that in people with vestibulo-cerebellar dysfunction, equilibrium is far more dis-turbedduring performance of rapid motions than during stasis, especially so when these movements involve changes in direction of movement and stimu-late the semicircular ducts. This suggests that the vestibulocerebellum is especially important in con-trolling balance between agonist and antagonist muscle contractions of the spine, hips, and shoulders during rapid changes in body positions as required by the vestibular apparatus.

One of the major problems in controlling balance is the amount of time required to transmit position signals and velocity of movement signals from the dif-ferent parts of the body to the brain. Even when the most rapidly conducting sensory pathways are used, up to 120 m/sec in the spinocerebellar afferent tracts, the delay for transmission from the feet to the brain is still 15 to 20 milliseconds. The feet of a person running rapidly can move as much as 10 inches during that time. Therefore, it is never possible for return signals from the peripheral parts of the body to reach the brain at the same time that the movements actually occur. How, then, is it possible for the brain to know when to stop a movement and to perform the next sequential act, especially when the movements are performed rapidly? The answer is that the signals from the periphery tell the brain how rapidly and in which directions the body parts are moving. It is then the function of the vestibulocerebellum to calculate inadvance from these rates and directions where thedifferent parts will be during the next few milliseconds. The results of these calculations are the key to the brain’s progression to the next sequential movement.

Thus, during control of equilibrium, it is presumed that information from both the body periphery and the vestibular apparatus is used in a typical feedback control circuit to provide anticipatory correction of postural motor signals necessary for maintaining equi-librium even during extremely rapid motion, including rapidly changing directions of motion.

As shown in Figure 56–8, the intermediate zone of each cerebellar hemisphere receives two types of information when a movement is performed: (1) infor-mation from the cerebral motor cortex and from the midbrain red nucleus, telling the cerebellum the intended sequential plan of movement for the next fewfractions of a second, and (2) feedback information from the peripheral parts of the body, especially from the distal proprioceptors of the limbs, telling the cere-bellum what actual movements result. 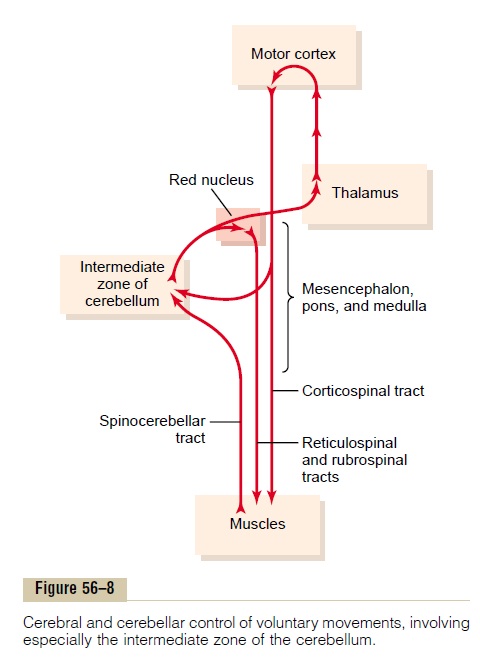 After the intermediate zone of the cerebellum has compared the intended movements with the actual movements, the deep nuclear cells of the interposed nucleus send corrective output signals (1) back to the cerebral motor cortex through relay nuclei in the thal-amus and (2) to the magnocellular portion (the lowerportion) of the red nucleus that gives rise to the rubrospinal tract. The rubrospinal tract in turn joinsthe corticospinal tract in innervating the lateral most motor neurons in the anterior horns of the spinal cord gray matter, the neurons that control the distal parts of the limbs, particularly the hands and fingers.

This part of the cerebellar motor control system pro-vides smooth, coordinate movements of the agonist and antagonist muscles of the distal limbs for per-forming acute purposeful patterned movements. The cerebellum seems to compare the “intentions” of the higher levels of the motor control system, as transmit-ted to the intermediate cerebellar zone through the corticopontocerebellar tract, with the “performance” by the respective parts of the body, as transmitted back to the cerebellum from the periphery. In fact, the ventral spinocerebellar tract even transmits back to the cerebellum an “efference” copy of the actual motor control signals that reach the anterior motor neurons, and this, too, is integrated with the signals arriving from the muscle spindles and other proprio-ceptor sensory organs, transmitted principally in the dorsal spinocerebellar tract. We learned earlier that similar comparator signals also go to the inferior olivary complex; if the signals do not compare favor-ably, the olivary-Purkinje cell system along with pos-sibly other cerebellar learning mechanisms eventually corrects the motions until they perform the desired function.

Function of the Cerebellum to Prevent Overshoot of Movements and to “Damp” Movements. Almost all movements of thebody are “pendular.” For instance, when an arm is moved, momentum develops, and the momentum must be overcome before the movement can be stopped. Because of momentum, all pendular move-ments have a tendency to overshoot. If overshooting does occur in a person whose cerebellum has been destroyed, the conscious centers of the cerebrum even-tually recognize this and initiate a movement in the reverse direction attempting to bring the arm to its intended position. But the arm, by virtue of its momen-tum, overshoots once more in the opposite direction, and appropriate corrective signals must again be insti-tuted. Thus, the arm oscillates back and forth past its intended point for several cycles before it finally fixes on its mark. This effect is called an action tremor, or intention tremor.

But, if the cerebellum is intact, appropriate learned, subconscious signals stop the movement precisely at the intended point, thereby preventing the overshoot as well as the tremor. This is the basic characteristicof a damping system. All control systems regulating pendular elements that have inertia must have damping circuits built into the mechanisms. For motor control by the nervous system, the cerebellum pro-vides most of this damping function.

Cerebellar Control of Ballistic Movements. Most rapidmovements of the body, such as the movements of the fingers in typing, occur so rapidly that it is not possi-ble to receive feedback information either from the periphery to the cerebellum or from the cerebellum back to the motor cortex before the movements are over. These movements are called ballistic movements, meaning that the entire movement is preplanned and set into motion to go a specific distance and then to stop.Another important example is the saccadic move-ments of the eyes, in which the eyes jump from one position to the next when reading or when looking at successive points along a road as a person is moving in a car.

If one considers once again the circuitry of the cere-bellum as described earlier, one sees that it is beauti-fully organized to perform this biphasic, first excitatory and then delayed inhibitory function that is required for preplanned rapid ballistic movements. One also sees that the built-in timing circuits of the cerebellar cortex are fundamental to this particular ability of the cerebellum.

Cerebrocerebellum—Function of the Large Lateral Zone of the Cerebellar Hemisphere to Plan, Sequence, and Time Complex Movements

In human beings, the lateral zones of the two cerebel-lar hemispheres are highly developed and greatly enlarged. This goes along with human abilities to plan and perform intricate sequential patterns of move-ment, especially with the hands and fingers, and to speak. Yet the large lateral zones of the cerebellar hemispheres have no direct input of information from the peripheral parts of the body. Also, almost all com-munication between these lateral cerebellar areas and the cerebral cortex is not with the primary cerebral motor cortex itself but instead with the premotor area and primary and association somatosensory areas.

Even so, destruction of the lateral zones of the cere-bellar hemispheres along with their deep nuclei, the dentate nuclei, can lead to extreme incoordination of complex purposeful movements of the hands, fingers, and feet and of the speech apparatus. This has been difficult to understand because of lack of direct com-munication between this part of the cerebellum and the primary motor cortex. However, experimental studies suggest that these portions of the cerebellum are concerned with two other important but indirect aspects of motor control: (1) the planning of sequen-tial movements and (2) the “timing” of the sequential movements.

An exceedingly interesting observation that sup-ports this view is that many neurons in the cerebellar dentate nuclei display the activity pattern for the sequential movement that is yet to come while the present movement is still occurring. Thus, the lateral cerebellar zones appear to be involved not with what movement is happening at a given moment but with what will be happening during the next sequential movement a fraction of a second or perhaps evenseconds later.

To summarize, one of the most important features of normal motor function is one’s ability to progress smoothly from one movement to the next in orderly succession. In the absence of the large lateral zones of the cerebellar hemispheres, this capability is seriously disturbed for rapid movements.

Timing Function. Another important function of thelateral zones of the cerebellar hemispheres is to provide appropriate timing for each succeeding move-ment. In the absence of these cerebellar zones, one loses the subconscious ability to predict ahead of time how far the different parts of the body will move in a given time. Without this timing capability, the person becomes unable to determine when the next sequen-tial movement needs to begin. As a result, the suc-ceeding movement may begin too early or, more likely, too late. Therefore, lesions in the lateral zones of the cerebellum cause complex movements (such as those required for writing, running, or even talking) to become incoordinate and lacking ability to progress in orderly sequence from one movement to the next. Such cerebellar lesions are said to cause failure ofsmooth progression of movements.

Extramotor  Predictive  Functions  of  the  Cerebrocerebellum.

The cerebrocerebellum (the large lateral lobes) also helps to “time” events other than movements of the body. For instance, the rates of progression of both auditory and visual phenomena can be predicted by the brain, but both of these require cerebellar partici-pation. As an example, a person can predict from the changing visual scene how rapidly he or she is approaching an object. A striking experiment that demonstrates the importance of the cerebellum in this ability is the effects of removing the large lateral por-tions of the cerebellum in monkeys. Such a monkey occasionally charges the wall of a corridor and literally bashes its brains because it is unable to predict when it will reach the wall.

We are only now beginning to learn about these extramotor predictive functions of the cerebellum. It is quite possible that the cerebellum provides a “time-base,” perhaps using time-delay circuits, against which signals from other parts of the central nervous system can be compared; it is often stated that the cerebellum is particularly helpful in interpreting rapidly changingspatiotemporal relations in sensory information.