Anatomical Functional Areas of the Cerebellum

Anatomically, the cerebellum is divided into three lobes by two deep fissures, as shown in Figures 56–1 and 56–2:(1) the anterior lobe, (2) the posterior lobe, and (3) the flocculonodular lobe.

Anatomical Functional Areas of the Cerebellum 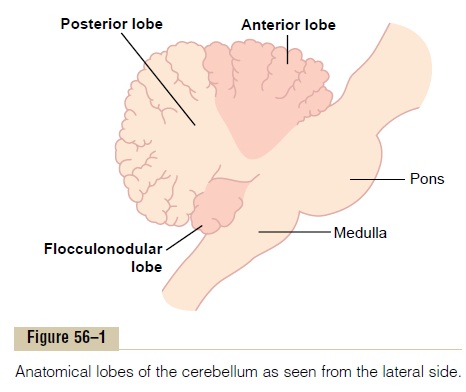 Longitudinal Functional Divisions of the Anterior and Posterior Lobes.From a functional point of view, the anterior andposterior lobes are organized not by lobes but along the longitudinal axis, as demonstrated in Figure 56–2, which shows a posterior view of the human cerebellum after the lower end of the posterior cerebellum has been rolled downward from its normally hidden position. Note down the center of the cerebellum a narrow band called the vermis, separated from the remainder of the cerebellum by shallow grooves. In this area, most cere-bellar control functions for muscle movements of the axial body, neck, shoulders, and hips are located. 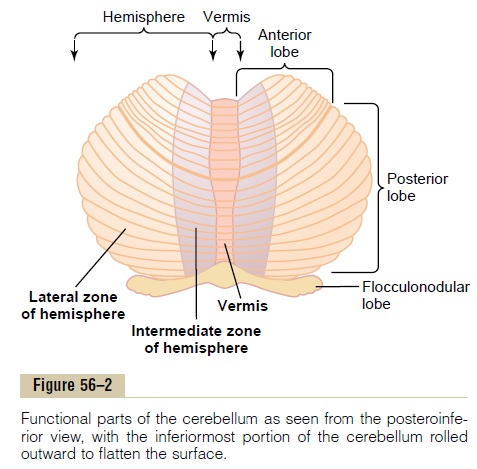 To each side of the vermis is a large, laterally pro-truding cerebellar hemisphere, and each of these hemi-spheres is divided into anintermediate zone and a lateralzone.

The intermediate zone of the hemisphere is con-cerned with controlling muscle contractions in the distal portions of the upper and lower limbs, especially the hands and fingers and feet and toes.

The lateral zone of the hemisphere operates at a much more remote level because this area joins with the cerebral cortex in the overall planning of sequential motor movements. Without this lateral zone, most dis-crete motor activities of the body lose their appropriate timing and sequencing and therefore become incoordi-nate, as we discuss more fully later.

Topographical Representation of the Body in the Vermis and Inter- mediate Zones. In the same manner that the cerebralsensory cortex, motor cortex, basal ganglia, red nuclei, and reticular formation all have topographical repre-sentations of the different parts of the body, so also is this true for the vermis and intermediate zones of the cerebellum. Figure 56–3 shows two such representa-tions. Note that the axial portions of the body lie in the vermis part of the cerebellum, whereas the limbs and facial regions lie in the intermediate zones. These topo-graphical representations receive afferent nerve signals from all the respective parts of the body as well as from corresponding topographical motor areas in the cere-bral cortex and brain stem. In turn, they send motor signals back to the same respective topographical areas of the cerebral motor cortex, as well as to topographi-cal areas of the red nucleus and reticular formation in the brain stem. 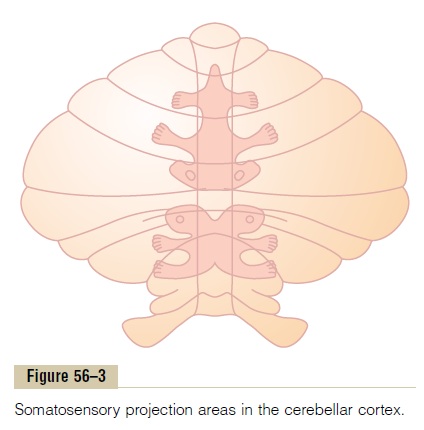