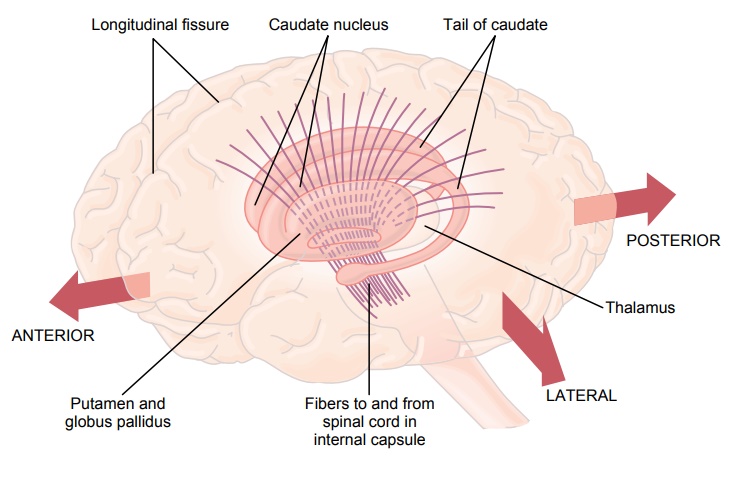 The basal ganglia, like the cerebellum, constitute another accessory motor system that functions usually not by itself but in close association with the cerebral cortex and corticospinal motor control system.

Figure 56–9 shows the anatomical relations of the basal ganglia to other structures of the brain. On each side of the brain, these ganglia consist of the caudatenucleus,putamen, globus pallidus, substantia nigra,and subthalamic nucleus. They are located mainly lateral to and surrounding the thalamus, occupying a large portion of the interior regions of both cerebral hemispheres. Note also that almost all motor and sensory nerve fibers connecting the cerebral cortex and spinal cord pass through the space that lies between the major masses of the basal ganglia, the caudate nucleus and the putamen. This space is calledthe internal capsule of the brain. It is important for our current discussion because of the intimate association between the basal ganglia and the corticospinal system for motor control. 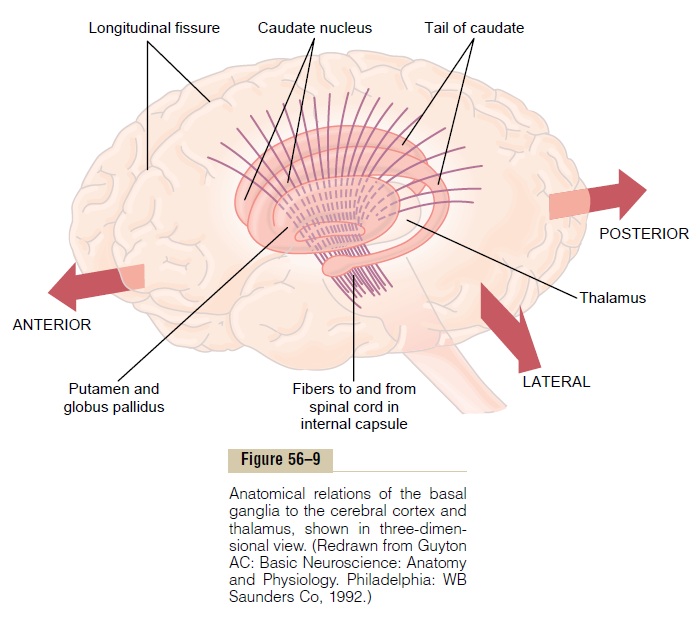 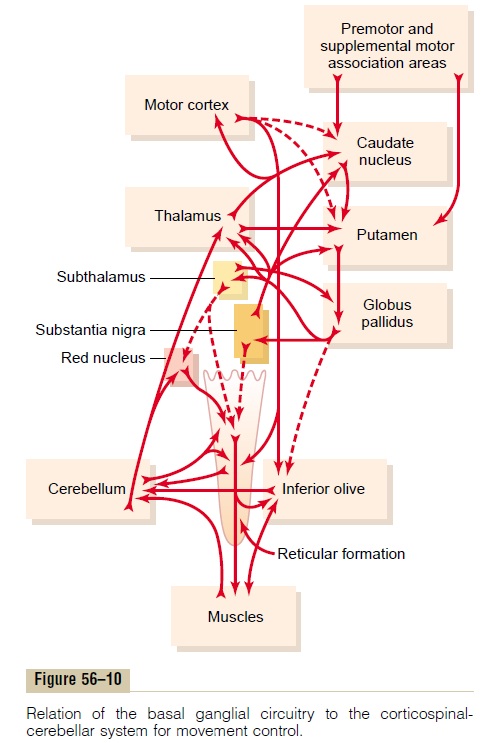 In the next few sections we will concentrate especially on two major circuits, the putamen circuit and the caudate circuit.

One of the principal roles of the basal ganglia in motor control is to function in association with the corti-cospinal system to control complex patterns of motoractivity. An example is the writing of letters of thealphabet. When there is serious damage to the basal ganglia, the cortical system of motor control can no longer provide these patterns. Instead, one’s writing becomes crude, as if one were learning for the first time how to write.

Other patterns that require the basal ganglia are cutting paper with scissors, hammering nails, shooting a basketball through a hoop, passing a football, throw-ing a baseball, the movements of shoveling dirt, most aspects of vocalization, controlled movements of the eyes, and virtually any other of our skilled movements, most of them performed subconsciously.

Neural Pathways of the Putamen Circuit. Figure 56–11 shows the principal pathways through the basal ganglia for executing learned patterns of movement. They begin mainly in the premotor and supplementary areas of the motor cortex and in the somatosensory areas of the sensory cortex. Next they pass to the putamen (mainly bypassing the caudate nucleus), then to the internal portion of the globus pallidus, next to the ventroanterior and ventrolateral relay nuclei of the thalamus, and finally return to the cerebral primary motor cortex and to portions of the premotor and sup-plementary cerebral areas closely associated with the primary motor cortex. Thus, the putamen circuit has its 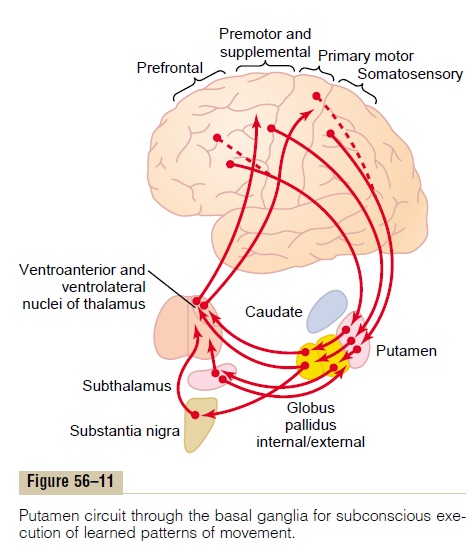 Abnormal Function in the Putamen Circuit: Athetosis, Hemibal-lismus, and Chorea. How does the putamen circuit func-tion to help execute patterns of movement? The answer is poorly known. However, when a portion of the circuit is damaged or blocked, certain patterns of movement become severely abnormal. For instance, lesions in the globus pallidus frequently lead to spon-taneous and often continuous writhing movements of a hand, an arm, the neck, or the face—movements called athetosis.

A lesion in the subthalamus often leads to sudden flailing movements of an entire limb, a condition called hemiballismus.

Multiple small lesions in the putamen lead to flick-ing movements in the hands, face, and other parts ofthe body, called chorea.

Lesions of the substantia nigra lead to the common and extremely severe disease of rigidity, akinesia, and tremors known as Parkinson’s disease, which wediscuss in more detail later.

The neural connections between the caudate nucleus and the corticospinal motor control system, shown in Figure 56–12, are somewhat different from those of the putamen circuit. Part of the reason for this is that the caudate nucleus, as shown in Figure 56–9, extends into all lobes of the cerebrum, beginning ante-riorly in the frontal lobes, then passing posteriorly through the parietal and occipital lobes, and finally curving forward again like the letter “C” into the tem-poral lobes. Furthermore, the caudate nucleus receives large amounts of its input from the association areas of the cerebral cortex overlying the caudate nucleus, mainly areas that also integrate the different types of sensory and motor information into usable thought patterns. 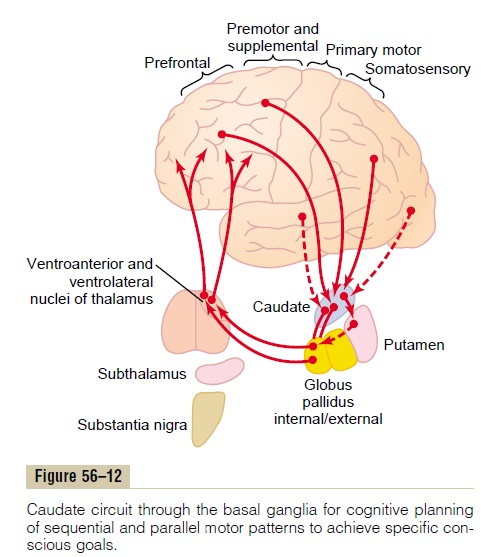 After the signals pass from the cerebral cortex to the caudate nucleus, they are next transmitted to the internal globus pallidus, then to the relay nuclei of the ventroanterior and ventrolateral thalamus, and finally back to the prefrontal, premotor, and supplementary motor areas of the cerebral cortex, but with almost none of the returning signals passing directly to the primary motor cortex. Instead, the returning signals go to those accessory motor regions in the premotor and supplementary motor areas that are concerned with putting together sequential patterns of movement lasting 5 or more seconds instead of exciting individ-ual muscle movements.

A good example of this would be a person seeing a lion approach and then responding instantaneously and automatically by (1) turning away from the lion, (2) beginning to run, and (3) even attempting to climb a tree. Without the cognitive functions, the person might not have the instinctive knowledge, without thinking for too long a time, to respond quickly and appropriately. Thus, cognitive control of motor activity determines subconsciously, and within seconds, which patterns of movement will be used together to achieve a complex goal that might itself last for many seconds.

Two important capabilities of the brain in controlling movement are (1) to determine how rapidly the move-ment is to be performed and (2) to control how large the movement will be. For instance, a person may write the letter “a” slowly or rapidly. Also, he or she may write a small “a” on a piece of paper or a large “a” on a chalkboard. Regardless of the choice, the propor-tional characteristics of the letter remain nearly the same.

In patients with severe lesions of the basal ganglia, these timing and scaling functions are poor; in fact, sometimes they are nonexistent. Here again, the basal ganglia do not function alone; they function in close association with the cerebral cortex. One especially important cortical area is the posterior parietal cortex, which is the locus of the spatial coordinates for motor control of all parts of the body as well as for the rela-tion of the body and its parts to all its surroundings. Figure 56–13 shows the way in which a person lacking a left posterior parietal cortex might draw the face of another human being, providing proper proportions for the right side of the face but almost ignoring the left side (which is in his or her right field of vision). Also, such a person will try always to avoid using his or her right arm, right hand, or other portions of his or her right body for the performance of tasks, almost not knowing that these parts of his or her body exist. 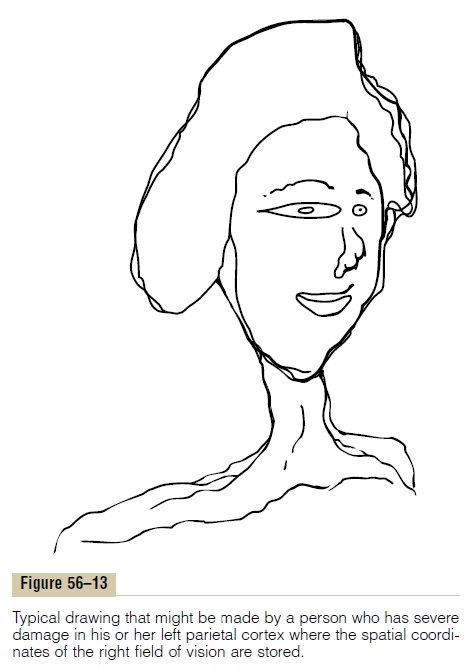 Because the caudate circuit of the basal ganglial system functions mainly with association areas of the cerebral cortex such as the posterior parietal cortex, presumably the timing and scaling of movements are functions of this caudate cognitive motor control circuit. However, our understanding of function in the basal ganglia is still so imprecise that much of what is conjectured in the last few sections is analytical deduc-tion rather than proven fact.

Functions of Specific Neurotransmitter Substances in the Basal Ganglial System

Figure 56–14 demonstrates the interplay of several specific neurotransmitters that are known to function within the basal ganglia, showing (1) dopamine path-ways from the substantia nigra to the caudate nucleus and putamen, (2) gamma-aminobutyric acid (GABA) pathways from the caudate nucleus and putamen to the globus pallidus and substantia nigra, (3) acetyl-choline pathways from the cortex to the caudatenucleus and putamen, and (4) multiple general path-ways from the brain stem that secretenorepinephrine, serotonin, enkephalin, and several other neurotrans-mitters in the basal ganglia as well as in other parts of the cerebrum. In addition to all these are multiple glu-tamate pathways that provide most of the excitatorysignals (not shown in the figure) that balance out the large numbers of inhibitory signals transmitted especially by the dopamine, GABA, and serotonin inhibitory transmitters. We will have more to say about some of these neurotransmitter and hormonal systems in subsequent sections when we discuss diseases of the basal ganglia, as well as in subsequent when we discuss behavior, sleep, wakefulness, and functions of the autonomic nervous system. 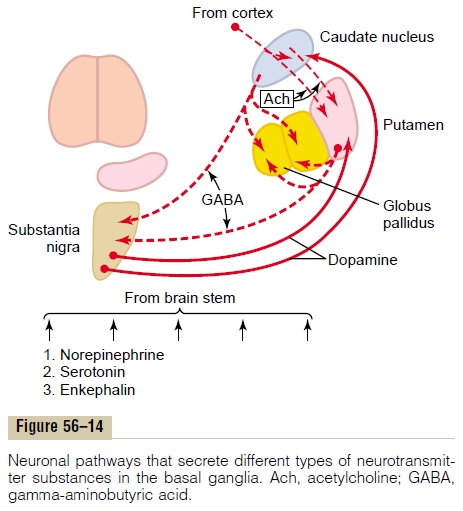