To diagnose blindness in specific portions of the retina, one charts the field of vision for each eye by a process called perimetry. This is done by having the subject look with one eye closed and the other eye looking toward a central spot directly in front of the eye. Then a small dot of light or a small object is moved back and forth in all areas of the field of vision, and the subject indicates when the spot of light or object can be seen and when it cannot. Thus, the field of vision for the left eye is plotted as shown in Figure 51â€“6. In all perime-try charts, a blind spot caused by lack of rods and cones in the retina over the optic disc is found about 15 degrees lateral to the central point of vision, as shown in the figure. 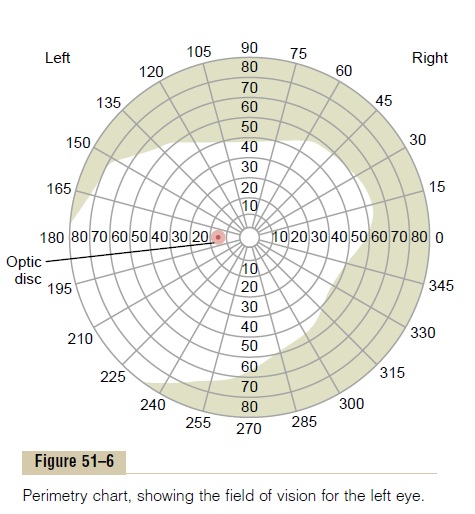 Abnormalities in the Fields of Vision. Occasionally, blindspots are found in portions of the field of vision other than the optic disc area. Such blind spots are called sco-tomata; they frequently are caused by damage to theoptic nerve resulting from glaucoma (too much fluid pressure in the eyeball), from allergic reactions in the retina, or from toxic conditions such as lead poisoning or excessive use of tobacco.

Still another condition that can be diagnosed by perimetry is retinitis pigmentosa. In this disease, por-tions of the retina degenerate, and excessive melanin pigment deposits in the degenerated areas. Retinitis pig-mentosa usually causes blindness in the peripheral field of vision first and then gradually encroaches on the central areas.

Effect of Lesions in the Optic Pathway on the Fields of Vision. Destruction of an entireoptic nervecausesblindness of the affected eye.

Destruction of the optic chiasm prevents the crossing of impulses from the nasal half of each retina to the opposite optic tract. Therefore, the nasal half of each retina is blinded, which means that the person is blind in the temporal field of vision for each eyebecause theimage of the field of vision is inverted on the retina bythe optical system of the eye; this condition is called bitemporal hemianopsia. Such lesions frequently resultfrom tumors of the pituitary gland pressing upward from the sella turcica on the bottom of the optic chiasm.

Interruption of an optic tract denervates the corre-sponding half of each retina on the same side as the lesion; as a result, neither eye can see objects to the opposite side of the head. This condition is known as homonymous hemianopsia.