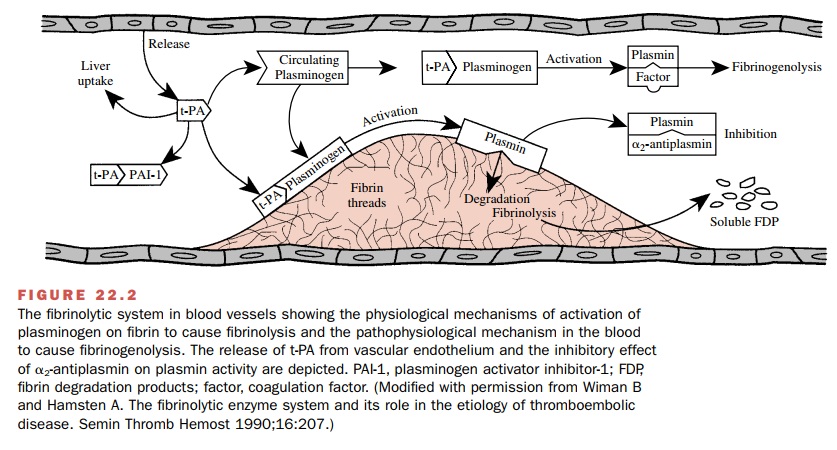 The fibrinolytic system (Fig. 22.2) is involved in restrict-ing clot propagation in the blood and in the removal of fibrin as wounds heal.

The fibrinolytic system (Fig. 22.2) is involved in restrict-ing clot propagation in the blood and in the removal of fibrin as wounds heal. Treatment of patients with fibri-nolytic (thrombolytic) drugs that activate the fibri-nolytic system is not a substitute for the anticoagulant drugs. The purpose of thrombolytic therapy is rapid lysis of already formed clots. 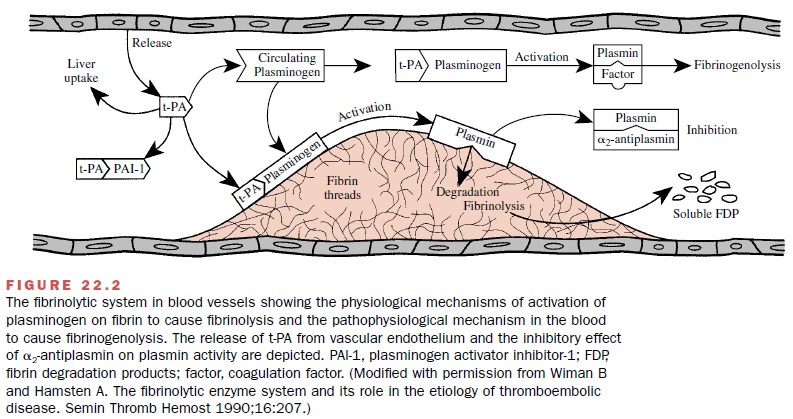 Circulating plasmin is rapidly neutralized by 2-an-tiplasmin, a physiological serine protease inhibitor that forms an inert complex with plasmin. In contrast, fibrin-bound plasmin is resistant to inactivation by 2-an-tiplasmin. Under normal circumstances plasma t-PA is inactive because it is inhibited by PAI-1, while t-PA that is bound to fibrin is unaffected by PAI-1. In addition, plasma t-PA has a very rapid turnover in blood (half-life 5 to 8 minutes). For these reasons, fibrinolysis is nor-mally restricted to the thrombus.

Activation of the fibrinolytic system with throm-bolytic drugs can disturb the balance of these regulatory mechanisms and elevate circulating plasmin activity. Plasmin has low substrate specificity and degrades fib-rinogen (fibrinogenolysis), plasminogen, and coagula-tion factors. The systemic unphysiological activation of the fibrinolytic system with thrombolytic drugs causes consumption of the coagulation factors, a lytic state, and bleeding.

Thrombolytic drugs cause lysis of formed clots in both arteries and veins and reestablish tissue perfusion.

Thrombolytic drugs are indicated for the management of severe pulmonary embolism, deep vein thrombosis, and arterial thromboembolism and are especially important therapy after myocardial infarction and acute ischemic stroke. Thrombolysis must be accomplished quickly after myocardial or cerebral infarction, since clots become more difficult to lyse as they age. Recanalization after ap-proximately 6 hours provides diminishing benefit to the infarcted area. The incidence of rethrombosis and rein-farction is greater when thrombolytic drugs with shorter plasma half-lives are used. Concurrent administration with heparin followed by warfarin, as well as antiplatelet drugs, is advocated to reduce reocclusion. Adjunctive an-ticoagulant and antiplatelet drugs may contribute to bleeding during thrombolytic therapy.

The principal adverse effect associated with throm-bolytic therapy is bleeding due to fibrinogenolysis or fibrinolysis at the site of vascular injury. Hypo-fibrinogenemia may occur and should be monitored with laboratory tests. At effective thrombolytic doses, the second- and third-generation agents cause less ex-tensive fibrinogenolysis, but bleeding occurs with a sim-ilar incidence for all agents. Life-threatening intracra-nial bleeding may necessitate stoppage of therapy, administration of whole blood, platelets or fresh frozen plasma, protamine (if heparin is present), and an an-tifibrinolytic drug (discussed later).

Streptokinase (Streptase, Kabikinase), a nonenzymatic protein from Lancefield group C -hemolytic strepto-cocci, is an indirectly acting activator of plasminogen. It forms a 1:1 complex with plasminogen, which results in a conformational change and exposure of an active site that can convert additional plasminogen into plasmin. The systemic administration of streptokinase can pro-duce significant lysis of acute deep vein and pulmonary emboli and acute arterial thrombi. Intravenous or intra-coronary artery (IC) streptokinase is effective in estab-lishing recanalization after myocardial infarction and in increasing short-term survival. The greatest benefit of streptokinase appears to be achieved by early intra-venous drug administration. Complications associated with the administration of streptokinase include hemor-rhage, pyrexia, and allergic or anaphylactic reactions. Patients may be refractory to streptokinase during ther-apy because of preexisting or streptokinase-induced an-tibodies. Streptokinase has two half-lives. The faster one (11 to13 minutes) is due to drug distribution and inhibi-tion by circulating antibodies, and the slower one (23 to 29 minutes) is due to loss of enzyme activity.

Urokinase (Abbokinase) is a two-polypeptide chain serine protease that does not bind avidly to fibrin and that directly activates both circulating and fibrin-bound plas-minogen. The plasma half-life of urokinase is approxi-mately 10 to 20 minutes. Urokinase is derived from hu-man cells and thus is not antigenic. Urokinase produces a significant resolution of recent pulmonary emboli.

The principal physiological activator of plasminogen in the blood, tissue-type plasminogen activator (t-PA, al-teplase) (Activase), has a high binding affinity for fibrin and produces, after IV administration, a fibrin-selective activation of plasminogen. This selectivity is not ab-solute; circulating plasminogen also may be activated by large doses or lengthy treatment. After intravenous administration, alteplase is more efficacious than strep-tokinase in establishing coronary reperfusion. At equief-fective thrombolytic doses, alteplase causes less fib-rinogenolysis than streptokinase, but bleeding occurs with a similar incidence.The rate of rethrombosis after t-PA is greater than after streptokinase, possibly because alteplase is rapidly cleared from the blood (half-life is 5 to 10 minutes), and several administrations may be war-ranted. Reocclusion may be lessened by administration of heparin and antiplatelet drugs. Alteplase is a product of recombinant DNA technology and consists predomi-nantly of the single-chain form (recombinant human tis-sue-type plasminogen activator, rt-PA). Upon exposure to fibrin, rt-PA is converted to the two-chain dimer.

Two genetically engineered variants of human t-PA have better pharmacological properties than alteplase. Reteplase (Retavase) contains only the peptide domains required for fibrin binding and protease activity. These changes increase potency and speed the onset of action. Reteplase may penetrate further into the fibrin clot than alteplase. The half-life of the drug remains short, however. Tenecteplase (TNK-tPA) (TNKase) has a longer half-life than alteplase, binds more avidly to fi-brin, and in contrast to many other thrombolytic agents, may be administered as an IV bolus.

Anistreplase (Eminase) consists of streptokinase in a noncovalent 1:1 complex with plasminogen. Anistreplase is catalytically inert because of acylation of the catalytic site of plasminogen. However, the affinity of plasmino-gen binding to fibrin is maintained. It has a long catalytic half-life (90 minutes), and the time required for nonen-zymatic deacylation lengthens its thrombolytic effect af-ter IV injection. Anistreplase is more effective than streptokinase in establishing coronary reperfusion, but it causes considerable fibrinogenolysis and is antigenic.

Hyperplasminemia resulting from thrombolytic therapy exposes fibrinogen and other coagulation factors, plas-minogen, and 2-antiplasmin to nonspecific proteolysis by plasmin, a process normally regulated by 2-antiplas-min. Consumption of these factors and extensive fibrin dissolution leads to hemorrhage. The binding of plas-minogen to fibrin involves interactions with lysine-binding sites in plasminogen. These interactions are blocked by antifibrinolytic drugs such as aminocaproic acid (Amicar) and tranexamic acid (Cyklokapron); plasminogen activation primarily and plasmin prote-olytic activity are inhibited.

In addition to being an antidote to fibrinogenoly-sis during thrombolytic therapy, antifibrinolytic drugs are used orally and intravenously to control bleeding following surgery. They also are useful adjuncts to co-agulation factor replacement during dental surgery in hemophiliac patients. Antifibrinolytic drugs are con-traindicated if intravascular coagulation is present. These drugs may cause nausea.

Several biological agents are used intravenously to maintain coagulability in the face of factor deficiencies in hemophilia or Von Willebrand’s disease patients. Manufacture of these substances involves extraction from human blood or recombinant technology. They in-clude antihemophilic factor (factor VIII) (Alphanate, Bioclate, others) for hemophilia A patients, factor IX concentrate (Bebulin, AlphaNine, Mononine, others) for hemophilia B patients, and factor VIIa (NovoSeven) for hemophilia and Von Willebrand patients. An in-crease in factor VIII levels by desmopressin (DDAVP, Concentraid, others), an analog of vasopressin, is useful for managing bleeding in hemophilia A and mild Von Willebrand’s disease patients. Anti-inhibitor coagulant complex (Autoplex, FEIBA) provides activated vitamin K–dependent clotting factors to return coagulability to the blood in hemophilia patients and other patients with acquired inhibitors to clotting factors.