Anticoagulant drugs inhibit the development and en-largement of clots by actions on the coagulation phase. They do not lyse clots or affect the fibrinolytic pathways.

Anticoagulant drugs inhibit the development and en-largement of clots by actions on the coagulation phase. They do not lyse clots or affect the fibrinolytic pathways.

Two types of heparin are used clinically. The first and older of the two, standard (unfractionated) heparin, is an animal extract. The second and newer type, called low-molecular-weight heparin (LMWH), is derived from unfractionated heparin.The two classes are similar but not identical in their actions and pharmacokinetic characteristics.

Heparin (heparin sodium) is a mixture of highly elec-tronegative acidic mucopolysaccharides that contain numerous N- and O-sulfate linkages. It is produced by and can be released from mast cells and is abundant in liver, lungs, and intestines.

The anticoagulation action of heparin depends on the presence of a specific serine protease inhibitor (ser-pin) of thrombin, antithrombin III, in normal blood.

Heparin binds to antithrombin III and induces a con-formational change that accelerates the interaction of antithrombin III with the coagulation factors. Heparin also catalyzes the inhibition of thrombin by heparin co-factor II, a circulating inhibitor. Smaller amounts of heparin are needed to prevent the formation of free thrombin than are needed to inhibit the protease activ-ity of clot-bound thrombin. Inhibition of free thrombin is the basis of low-dose prophylactic therapy.

Heparin is prescribed on a unit (IU) rather than mil-ligram basis. The dose must be determined on an indi-vidual basis. Heparin is not absorbed after oral admin-istration and therefore must be given parenterally. Intravenous administration results in an almost immedi-ate anticoagulant effect. There is an approximate 2-hour delay in onset of drug action after subcutaneous admin-istration. Intramuscular injection of heparin is to be avoided because of unpredictable absorption rates, lo-cal bleeding, and irritation. Heparin is not bound to plasma proteins or secreted into breast milk, and it does not cross the placenta.

Heparin’s action is terminated by uptake and me-tabolism by the reticuloendothelial system and liver and by renal excretion of the unchanged drug and its de-polymerized and desulfated metabolite. The relative proportion of administered drug that is excreted as un-changed heparin increases as the dose increases. Renal insufficiency reduces the rate of heparin clearance from the blood.

The physiological function of heparin is not com-pletely understood. It is found only in trace amounts in normal circulating blood. It exerts an antilipemic effect by releasing lipoprotein lipase from endothelial cells; heparinlike proteoglycans produced by endothelial cells have anticoagulant activity. Heparin decreases platelet and inflammatory cell adhesiveness to endothe-lial cells, reduces the release of platelet-derived growth factor, inhibits tumor cell metastasis, and exerts an an-tiproliferative effect on several types of smooth muscle.

Therapy with heparin occurs in an inpatient setting. Heparin inhibits both in vitro and in vivo clotting of blood. Whole blood clotting time and activated partial thromboplastin time (aPTT) are prolonged in propor-tion to blood heparin concentrations.

The major adverse reaction resulting from heparin therapy is hemorrhage. Bleeding can occur in the uri-nary or gastrointestinal tract and in the adrenal gland. Subdural hematoma, acute hemorrhagic pancreatitis, hemarthrosis, and wound ecchymosis also occur. The incidence of life-threatening hemorrhage is low but variable. Heparin-induced thrombocytopenia of imme-diate and delayed onset may occur in 3 to 30% of pa-tients. The immediate type is transient and may not in-volve platelet destruction, while the delayed reaction involves the production of heparin-dependent an-tiplatelet antibodies and the clearance of platelets from the blood. Heparin-associated thrombocytopenia may be associated with irreversible aggregation of platelets (white clot syndrome). Additional untoward effects of heparin treatment include hypersensitivity reactions (e.g., rash, urticaria, pruritus), fever, alopecia, hypoal-dosteronism, osteoporosis, and osteoalgia.

The specific heparin antagonist protamine can be employed to neutralize heparin in cases of serious hem-orrhage. Protamines are basic low-molecular-weight, positively charged proteins that have a high affinity for the negatively charged heparin molecules. The binding of protamine to heparin is immediate and results in the formation of an inert complex. Protamine has weak an-ticoagulant activity.

Low-molecular-weight fragments produced by chemical depolymerization and extraction of standard heparin consist of heterogeneous polysaccharide chains of mo-lecular weight 2,000 to 9,000. The LMWH molecules contain the pentasaccharide sequence necessary for binding to antithrombin III but not the 18-saccharide sequence needed for binding to thrombin. Compared to standard heparin, LMWH has a 2- to 4-fold greater an-tifactor Xa activity than antithrombin activity.

LMWH has greater bioavailability than standard heparin, a longer-lasting effect, and dose-independent clearance pharmacokinetics. The predictable relation-ship between anticoagulant response and dose allows anticoagulant control without laboratory tests. LMWH is more effective than standard heparin in preventing and treating venous thromboembolism. The incidence of thrombocytopenia after administration of LMWH is lower than with standard heparin. Adverse drug reac-tions like those caused by standard heparin have been seen during therapy with LMWH, and overdose is treated with protamine.

LMWH is available for subcutaneous administra-tion as enoxaparin (Lovenox), dalteparin (Fragmin), ardeparin (Normiflo), and tinzaparin (Innohep). Dana-paroid (Orgaran), a heparinoid composed of heparin sulfate, dermatan sulfate, and chondroitin sulfate, has greater factor Xa specificity than LMWH. Bleeding due to danaparoid is not reversed by protamine.

The orally effective anticoagulant drugs are fat-soluble derivatives of 4-hydroxycoumarin or indan-1,3-dione, and they resemble vitamin K. Warfarin is the oral anti-coagulant of choice. The indandione anticoagulants have greater toxicity than the coumarin drugs.

Unlike heparin, the oral anticoagulants induce hypoco-agulability only in vivo. They are vitamin K+ antagonists. Vitamin K+ is required to catalyze the conversion of the precursors of vitamin K–dependent clotting factors II, VII, IX, and X.This involves the posttranslational -car-boxylation of glutamic acid residues at the N-terminal end of the proteins. The -carboxylation step is linked to a cycle of enzyme reactions involving the active hy-droquinone form of vitamin K+ (K1H2).The regeneration of K1H1 by an epoxide reductase is blocked by the oral anticoagulants. These drugs thus cause hypocoagulabil-ity by inducing the formation of structurally incomplete clotting factors.

Commercial warfarin is a racemic mixture of S- and R-enantiomers; S-warfarin is more potent than R-war-farin.

Warfarin is rapidly and almost completely absorbed af-ter oral administration and is bound extensively ( >95%) to plasma proteins. Since it is the unbound drug that produces the anticoagulant effect, displace-ment of albumin-bound warfarin by other agents may result in bleeding.Although these drugs do not cross the blood-brain barrier, they can cross the placenta and may cause teratogenicity and hemorrhage in the fetus.

Warfarin is inactivated by hepatic P450 isozymes; hydroxylated metabolites are excreted into the bile and then into the intestine. Hepatic disease may potentiate the anticoagulant response.

Warfarin is used both on an inpatient and outpatient basis when long-term anticoagulant therapy is indi-cated. The onset of anticoagulation is delayed, the la-tency being determined in part by the time required for absorption and in part by the half-lives of the vitamin K–dependent hemostatic proteins. The anticoagulant ef-fect will not be evident in coagulation tests such as pro-thrombin time until the normal factors already present in the blood are catabolized; this takes 5 hours for factor VII and 2 to 3 days for prothrombin (factor II). The an-ticoagulant effect may be preceded by a transient pe-riod of hypercoagulability due to a rapid decrease in protein C levels. More rapid anticoagulation is pro-vided, when necessary, by administering heparin.

Warfarin is administered in conventional doses or minidoses to reduce bleeding. The dose range is ad-justed to provide the desired end point.

Oral anticoagulants are ordinarily contraindicated in the presence of active or past gastrointestinal ulcera-tion; thrombocytopenia; hepatic or renal disease; malig-nant hypertension; recent brain, eye, or spinal cord sur-gery; bacterial endocarditis; chronic alcoholism; and pregnancy. These agents also should not be prescribed for individuals with physically hazardous occupations.

Dietary intake of vitamin K+ and prior or concomi-tant therapy with a large number of pharmacologically unrelated drugs can potentiate or inhibit the actions of oral anticoagulants. Laxatives and mineral oil may re-duce the absorption of warfarin. The patient’s pro-thrombin time and international normalized ratio (INR) should be monitored when a drug is added or removed from therapy. Selected drug interactions in-volving oral anticoagulants are summarized in Table 22.1. 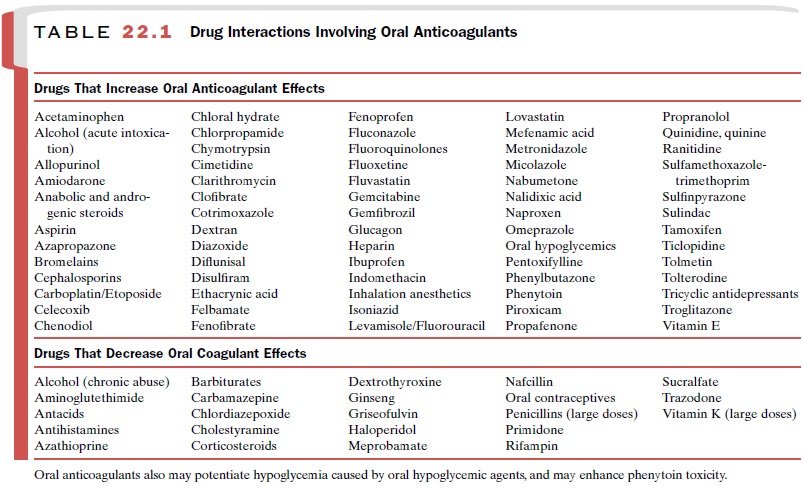 Two drugs that are direct inhibitors of thrombin but that do not involve antithrombin III or vitamin K+ in their mechanism of action have been approved to pro-vide intravenous anticoagulation in patients with he-parin-induced thrombocytopenia. Lepirudin (Refludan) and bivalirudin (Angiomax), which are analogues of the leech peptide anticoagulant hirudin, bind in a 1:1 com-plex with thrombin to inhibit its protease activity. Argatroban (Acova, Novastan), a synthetic analogue of arginine, interacts reversibly with and inhibits throm-bin’s catalytic site. Both drugs have a short half-life. Lipuridin is cleared following metabolism and urinary excretion of changed and unchanged drug; hepatic me-tabolism of argatroban is a therapeutic advantage in pa-tients with renal insufficiency. No antagonists for these drugs are available.