Each of the components of energy expenditure is determined by various factors. RMR is highly variable between individuals (±25%), but is very consistent within individuals (<5%).

Each of the components of energy expenditure is determined by various factors. RMR is highly variable between individuals (±25%), but is very consistent within individuals (<5%). Since RMR occurs pre-dominantly in muscle and the major organs of the body, the main source of individual variability in RMR is an individual’s amount of organ and muscle mass. Thus, fat-free mass (FFM; the total mass of the body that is not fat, i.e., predominantly organs and muscle) explains 60–80% of the variation in RMR between individuals. This concept can be explained using the woodstove analogy; the larger the wood-stove (or FFM), the larger the amount of heat pro-duction (or the larger the RMR). Since FFM is a het-erogeneous mixture of all nonfat body components, the metabolic rate associated with each kilogram of FFM is dependent on the quality of the FFM, in terms of hydration and relative contribution of the different organs that make up the FFM. For example, skeletal muscle constitutes approximately 43% of total mass in an adult, but contributes only 22–36% of the RMR, whereas the brain, which constitutes approximately only 2% of mass, contributes 20–24% of the RMR. In addition, the metabolic cost of each kilogram of FFM decreases with developmental progression, probably owing to developmental increases in the muscle mass to organ mass ratio within FFM. Thus, the relation-ship between RMR and FFM is not linear across all ages and is estimated to be 331.8 kJ/kg between the ages of 0 and 2.5 years, 151.2 kJ/kg in children aged 4–7 years, 88.2 kJ/kg during adolescence, and 151.2 kJ/ kg in adulthood.

Although fat mass is generally thought to be meta-bolically inert, it significantly contributes to varia-tions in RMR. This is likely explained, at least in part, by neurobiological effects (e.g., changes in sympathetic nervous system activity) resulting from variations in fat mass which affect the metabolism of other tissues. RMR is also influenced by fat mass, even though fat mass is generally thought to be meta-bolically inert. Fat mass contributes in the order of 42.0–54.6 kJ/kg to RMR. This difference is indepen-dent of the gender difference in FFM; in other words, if one studied a group of males and females of identical FFM and similar age, RMR would be higher in males than in females by around 210.0 kJ/ day. This gender difference is consistent across the lifespan, and the source of the difference is not well understood (Table 3.1). More active people tend to have a higher RMR than inactive individuals. This difference may be explained in part by the resid-ual effects of chronic exercise on metabolic rate. In other words, RMR appears to be elevated because of the long-lasting effects of the thermic effect of exer-cise. However, other factors are also involved, since the higher RMR in more active individuals persists long after the last bout of exercise has been com-pleted. Collectively, FFM, fat mass, age, gender, and physical activity explain 80–90% of the variance in RMR. In addition, a portion of the unique variance in RMR across individuals has been ascribed to genetic factors, although the specific source of this genetic variation has not yet been identified. Other factors that have been shown to influence metabolic rate include thyroid hormones (higher levels increase  metabolic rate) and sympathetic nervous system activity. 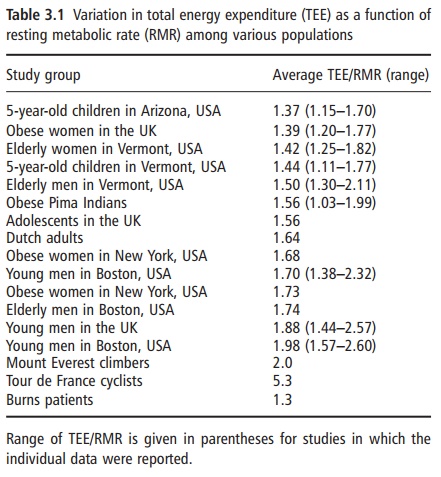 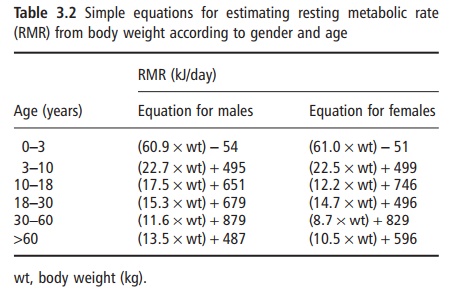 The thermic effect of meal ingestion is primarily influenced by the quantity and macronutrient quality of the ingested calories. The thermic effect of food has also been termed meal-induced thermogenesis, or the specific dynamic action of food. The increase in meta-bolic rate that occurs after meal ingestion occurs over an extended period of at least 5 hours; the cumulative energy cost is equivalent to around 10% of the energy ingested. In other words, if one consumed a mixed meal of 2.1 MJ, the body would require 210.0 kJ to digest, process, and metabolize the contents of the meal. The thermic effect of feeding is higher for protein and carbohydrate than for fat. This is because, for fat, the process of energy storage is very efficient, whereas, for carbohydrate and protein, additional energy is required for metabolic conversion to the appropriate storage form (i.e., excess glucose con-verted to glycogen for storage, and excess amino acids from protein converted to fat for storage). In addition to the obligatory energetic cost of processing and storage of nutrients, a more variable facultative ther-mogenic component has been described. This com-ponent is mainly pertinent to carbohydrates, which through increased insulin secretion produce a dipha-sic activation of the sympathoadrenal system. The initial phase is an insulin-mediated increase in sym-pathetic activity, which produces a β-adrenoceptor-mediated increase in energy expenditure. The second and later phase occurs when a counter-regulatory increase in plasma epinephrine is elicited by the falling blood glucose. This increase in epinephrine has a similar slight stimulatory effect on energy expenditure. As a result of the mediation by β-adrenoceptors the thermic effect of carbohydrate-rich meals can be slightly reduced by pharmacological β-adrenoceptor antagonists. 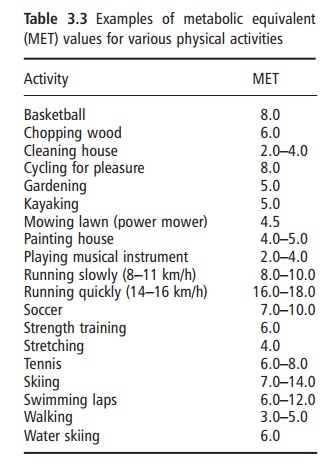 The DLW method requires a person to ingest small amounts of “heavy” water that is isotopically labeled with deuterium and oxygen-18 (2H2O and H218O). These forms of water are naturally occurring, stable (nonradioactive) isotopes of water that differ from the most abundant form of water. In deuterium-labeled water, the hydrogen is replaced with deute-rium, which is an identical form of water except that deuterium has an extra neutron in its nucleus com-pared with hydrogen, and is thus a heavier form of water; similarly, 18O-labeled water contains oxygen with an additional two extra neutrons. Thus, these stable isotopes act as molecular tags so that water can be tracked in the body. After a loading dose, deute-rium-labeled water is washed out of the body as a function of body water turnover; 18O is also lost as a function of water turnover, but is lost via carbon dioxide production as well. Therefore, using a number of assumptions, the rate of carbon dioxide produc-tion and energy expenditure can be assessed based on the different rates of loss of these isotopes from the body.

The DLW technique has been validated in humans in several laboratories around the world by compari-son with indirect calorimetry in adults and infants. These studies generally show the technique to be accurate to within 5–10%, relative to data derived by indirect calorimetry for subjects living in metabolic chambers. The theoretical precision of the DLW tech-nique is 3–5%. However, the experimental variability is ±12% under free-living conditions, owing to fluc-tuations in physical activity levels, and ±8% under more controlled sedentary living conditions. The good accuracy and reasonable precision of the tech-nique therefore allow the DLW method to be used as a “gold standard” measure of free-living energy expenditure in humans against which other methods can be compared.