How much energy do we need to sustain life and maintain our body energy stores? 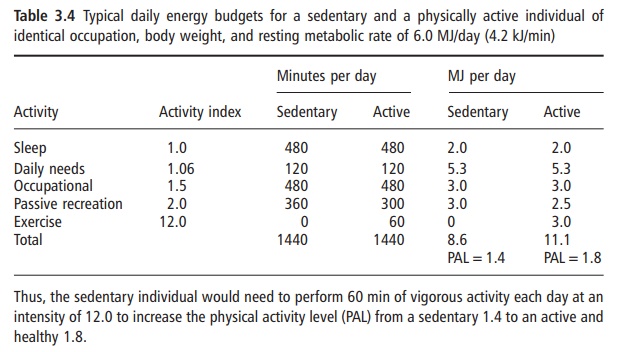 A low PAL indicates a sedentary lifestyle, whereas a high PAL represents a highly active lifestyle. The highest recorded sustained PAL in humans was recorded in cyclists participating in the Tour de France road race. These elite athletes could sustain a daily energy expenditure that was up to five times their RMR over extended periods. Smaller animals, such as migrating birds, have a much higher ceiling for achieving higher rates of total energy expen-diture, which can reach up to 20 times their RMR.

Individuals who have sedentary occupations and do not participate frequently in leisure pursuits that require physical activity probably have a PAL factor in the region of 1.4. Those who have occupations requiring light activity and participate in light physi-cal activities in leisure time probably have a PAL around 1.6 (this is a typical value for sedentary people living in an urban environment). Individuals who have physically active occupations and lifestyles prob-ably have a PAL greater than 1.75. It has been sug-gested that the optimal PAL that protects against the development of obesity is around 1.8 or higher. Increasing one’s physical activity index from 1.6 to 1.8 requires 30 min of daily vigorous activity, or 60 min of light activity (Table 3.4).