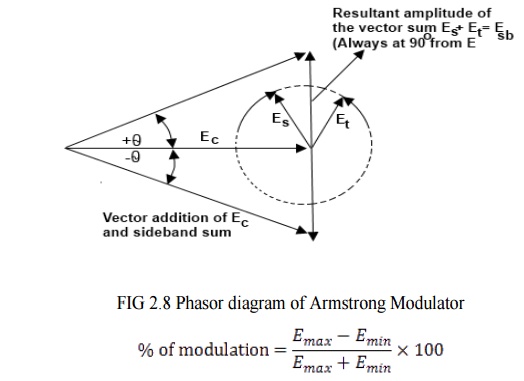 The carrier frequency change at the adder output is a function of the output phase shift and is found by. fc = ∆θfs (in hertz)

When θ is the phase change in radians and fs is the lowest audio modulating frequency. In most FM radio bands, the lowest audio frequency is 50Hz. Therefore, the carrier frequency change at the adder output is 0.6125 x 50Hz = ± 30Hz since 10% AM represents the upper limit of carrier voltage change, then ± 30Hz is the maximum deviation from the modulator for PM.

The 90° phase shift network does not change the signal frequency because the components and resulting phase change are constant with time. However, the phase of the adder output voltage is in a continual state of change brought about by the cyclical variations of the message signal, and during the time of a phase change, there will also be a frequency change. 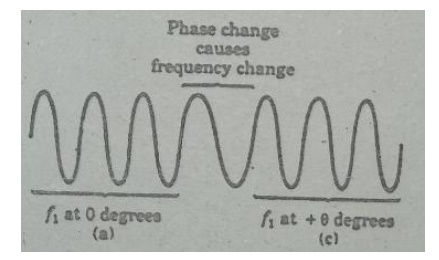 1.     The exciter section contains the carrier oscillator, reactance modulator and the buffer amplifier.

The essential function of each circuit in the FM transmitter may be described as follows.

1.     The function of the carrier oscillator is to generate a stable sine wave signal at the rest frequency, when no modulation is applied. It must be able to linearly change frequency when fully modulated, with no measurable change in   amplitude.

A Tripler circuit is constructed in the same way except that the tuned circuit resonates at 3 times the input - frequency. In this way, the tuned circuit receives one input pulse for every three cycles of oscillation it produces Multipliers can be constructed to increase the input frequency by any integer factor up to approximately 10. As' the multiplication factor gets higher, the power output of the multiplier decreases. For most practical applications, the best result is obtained with multipliers of 2 and 3.

Another way to look the operation of class C multipliers is .to .remember that the non-sinusoidal current pulse is rich in harmonics. Each time the pulse occurs, the second, third, fourth, fifth, and higher harmonics are generated. The purpose of the tuned circuit in the collector is to act as a filter to select the desired harmonics. 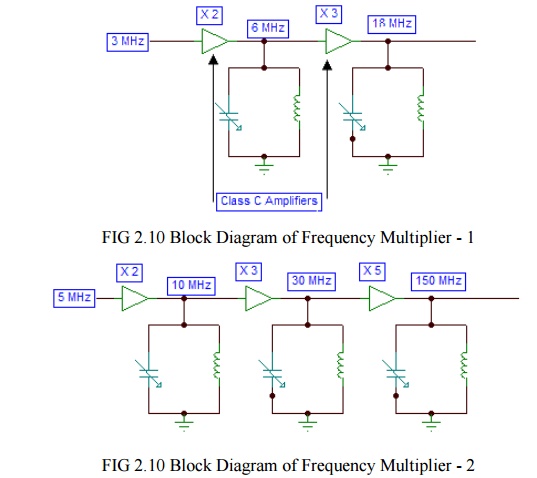 The reactance modulator takes its name from the fact that the impedance of the circuit acts as a reactance (capacitive or inductive) that is connected in parallel with the resonant circuit of the Oscillator. The varicap can only appear as a capacitance that becomes part of the frequency determining branch of the oscillator circuit. However, other discrete devices can appear as a capacitor or as an inductor to the oscillator, depending on how the circuit is arranged. A colpitts oscillator uses a capacitive voltage divider as the phase-reversing feedback path and would most likely tapped coil as the phase-reversing element in the feedback loop and most commonly uses a modulator that appears inductive.