The UML methodology is being used extensively in software design and has many types of diagrams for various software design purposes. We only briefly present the basics of UML class diagrams here, and compare them with ER diagrams. In some ways, class diagrams can be considered as an alternative notation to ER diagrams. Additional UML notation and concepts are presented in Section 8.6, and in Chapter 10. Figure 7.16 shows how the COMPANY ER database schema in Figure 7.15 can be displayed using UML class diagram notation. The entity types in Figure 7.15 are modeled as classes in Figure 7.16. An entity in ER corresponds to an object in UML. 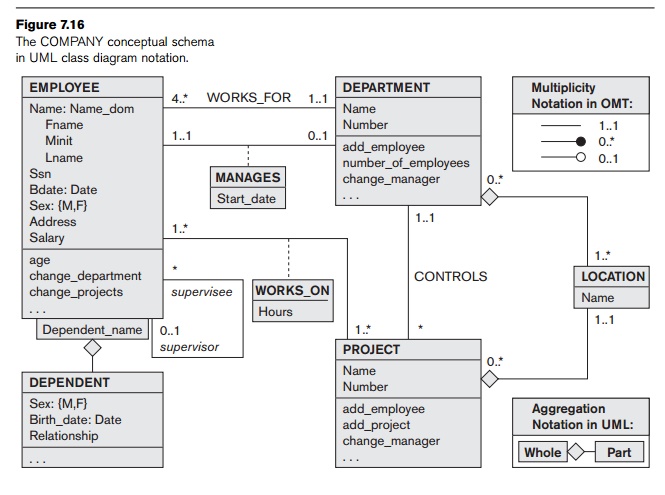 In UML class diagrams, a class (similar to an entity type in ER) is displayed as a box (see Figure 7.16) that includes three sections: The top section gives the class name (similar to entity type name); the middle section includes the attributes; and the last section includes operations that can be applied to individual objects (similar to individual entities in an entity set) of the class. Operations are not specified in ER diagrams. Consider the EMPLOYEE class in Figure 7.16. Its attributes are Name, Ssn, Bdate, Sex, Address, and Salary. The designer can optionally specify the domain of an attribute if desired, by placing a colon (:) followed by the domain name or description, as illustrated by the Name, Sex, and Bdate attributes of EMPLOYEE in Figure 7.16. A composite attribute is modeled as a structured domain, as illustrated by the Name attribute of EMPLOYEE. A multivalued attribute will generally be mod-eled as a separate class, as illustrated by the LOCATION class in Figure 7.16.

Relationship types are called associations in UML terminology, and relationship instances are called links. A binary association (binary relationship type) is repre-sented as a line connecting the participating classes (entity types), and may option-ally have a name. A relationship attribute, called a link attribute, is placed in a box that is connected to the association’s line by a dashed line. The (min, max) notation described in Section 7.7.4 is used to specify relationship constraints, which are called multiplicities in UML terminology. Multiplicities are specified in the form min..max, and an asterisk (*) indicates no maximum limit on participation. However, the multiplicities are placed on the opposite ends of the relationship when compared with the notation discussed in Section 7.7.4 (compare Figures 7.15 and 7.16). In UML, a single asterisk indicates a multiplicity of 0..*, and a single 1 indi-cates a multiplicity of 1..1. A recursive relationship (see Section 7.4.2) is called a reflexive association in UML, and the role names—like the multiplicities—are placed at the opposite ends of an association when compared with the placing of role names in Figure 7.15.

In UML, there are two types of relationships: association and aggregation. Aggregation is meant to represent a relationship between a whole object and its component parts, and it has a distinct diagrammatic notation. In Figure 7.16, we modeled the locations of a department and the single location of a project as aggre-gations. However, aggregation and association do not have different structural properties, and the choice as to which type of relationship to use is somewhat sub-jective. In the ER model, both are represented as relationships.

UML also distinguishes between unidirectional and bidirectional associations (or aggregations). In the unidirectional case, the line connecting the classes is displayed with an arrow to indicate that only one direction for accessing related objects is needed. If no arrow is displayed, the bidirectional case is assumed, which is the default. For example, if we always expect to access the manager of a department starting from a DEPARTMENT object, we would draw the association line represent-ing the MANAGES association with an arrow from DEPARTMENT to EMPLOYEE. In addition, relationship instances may be specified to be ordered. For example, we could specify that the employee objects related to each department through the WORKS_FOR association (relationship) should be ordered by their Salary attribute value. Association (relationship) names are optional in UML, and relationship attributes are displayed in a box attached with a dashed line to the line representing the association/aggregation (see Start_date and Hours in Figure 7.16).

The operations given in each class are derived from the functional requirements of the application, as we discussed in Section 7.1. It is generally sufficient to specify the operation names initially for the logical operations that are expected to be applied to individual objects of a class, as shown in Figure 7.16. As the design is refined, more details are added, such as the exact argument types (parameters) for each operation, plus a functional description of each operation. UML has function descriptions and sequence diagrams to specify some of the operation details, but these are beyond the scope of our discussion. Chapter 10 will introduce some of these diagrams.

Weak entities can be modeled using the construct called qualified association (or qualified aggregation) in UML; this can represent both the identifying relationship and the partial key, which is placed in a box attached to the owner class. This is illus-trated by the DEPENDENT class and its qualified aggregation to EMPLOYEE in Figure 7.16. The partial key Dependent_name is called the discriminator in UML ter-minology, since its value distinguishes the objects associated with (related to) the same EMPLOYEE. Qualified associations are not restricted to modeling weak enti-ties, and they can be used to model other situations in UML.

This section is not meant to be a complete description of UML class diagrams, but rather to illustrate one popular type of alternative diagrammatic notation that can be used for representing ER modeling concepts.