Entities and Their Attributes. The basic object that the ER model represents is an entity, which is a thing in the real world with an independent existence. An entity may be an object with a physical existence (for example, a particular person, car, house, or employee) or it may be an object with a conceptual existence (for instance, a company, a job, or a university course). Each entity has attributes—the particular properties that describe it. For example, an EMPLOYEE entity may be described by the employee’s name, age, address, salary, and job. A particular entity will have a 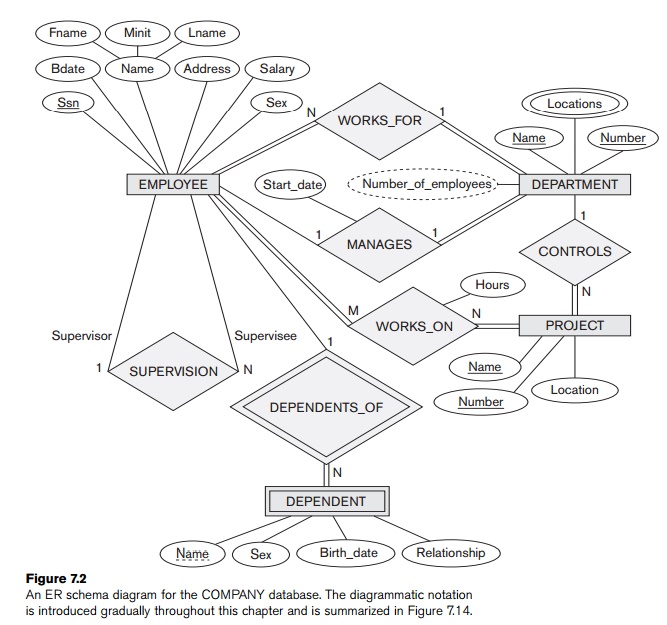 value for each of its attributes. The attribute values that describe each entity become a major part of the data stored in the database.

Several types of attributes occur in the ER model: simple versus composite, single-valued versus multivalued, and stored versus derived. First we define these attribute

types and illustrate their use via examples. Then we discuss the concept of a NULL value for an attribute.

need to subdivide it into component attributes. For example, if there is no need to refer to the individual components of an address (Zip Code, street, and so on), then the whole address can be designated as a simple attribute.

Single-Valued versus Multivalued Attributes. Most attributes have a single value for a particular entity; such attributes are called single-valued. For example, Age is a single-valued attribute of a person. In some cases an attribute can have a set of values for the same entity—for instance, a Colors attribute for a car, or a College_degrees attribute for a person. Cars with one color have a single value, whereas two-tone cars have two color values. Similarly, one person may not have a college degree, another person may have one, and a third person may have two or more degrees; therefore, different people can have different numbers of values for the College_degrees attribute. Such attributes are called multivalued. A multivalued attribute may have lower and upper bounds to constrain the number of values allowed for each individual entity. For example, the Colors attribute of a car may be restricted to have between one and three values, if we assume that a car can have three colors at most.

Stored versus Derived Attributes. In some cases, two (or more) attribute values are related—for example, the Age and Birth_date attributes of a person. For a particular person entity, the value of Age can be determined from the current (today’s) date and the value of that person’s Birth_date. The Age attribute is hence called a derived attribute and is said to be derivable from the Birth_date attribute, which is called a stored attribute. Some attribute values can be derived from related entities; for example, an attribute Number_of_employees of a DEPARTMENT entity can be derived by counting the number of employees related to (working for) that department.

NULL Values. In some cases, a particular entity may not have an applicable value for an attribute. For example, the Apartment_number attribute of an address applies only to addresses that are in apartment buildings and not to other types of residences, such as single-family homes. Similarly, a College_degrees attribute applies only to people with college degrees. For such situations, a special value called NULL is created. An address of a single-family home would have NULL for its Apartment_number attribute, and a person with no college degree would have NULL for College_degrees. NULL can also be used if we do not know the value of an attribute for a particular entity—for example, if we do not know the home phone num-ber of ‘John Smith’ in Figure 7.3. The meaning of the former type of NULL is not applicable, whereas the meaning of the latter is unknown. The unknown category of NULL can be further classified into two cases. The first case arises when it is known that the attribute value exists but is missing—for instance, if the Height attribute of a person is listed as NULL. The second case arises when it is not known whether the attribute value exists—for example, if the Home_phone attribute of a person is NULL.

Complex Attributes. Notice that, in general, composite and multivalued attributes can be nested arbitrarily. We can represent arbitrary nesting by grouping components of a composite attribute between parentheses () and separating the components with commas, and by displaying multivalued attributes between braces { }. Such attributes are called complex attributes. For example, if a person can have more than one residence and each residence can have a single address and multiple phones, an attribute Address_phone for a person can be specified as shown in Figure 7.5. Both Phone and Address are themselves composite attributes.

Entity Types and Entity Sets. A database usually contains groups of entities that are similar. For example, a company employing hundreds of employees may want to store similar information concerning each of the employees. These employee entities share the same attributes, but each entity has its own value(s) for each attribute. An entity type defines a collection (or set) of entities that have the same attributes. Each entity type in the database is described by its name and attributes. Figure 7.6 shows two entity types: EMPLOYEE and COMPANY, and a list of some of the attributes for 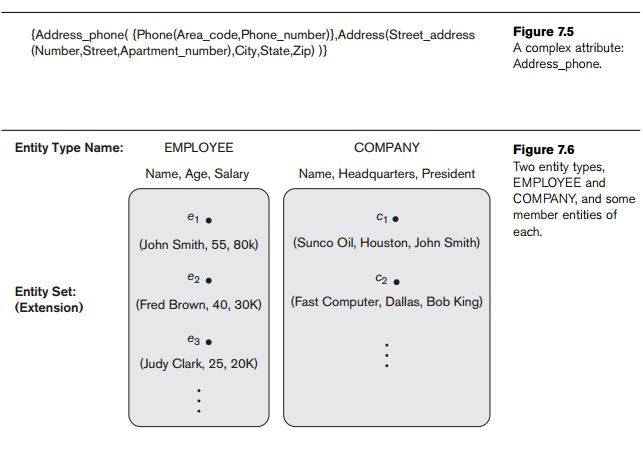 each. A few individual entities of each type are also illustrated, along with the values of their attributes. The collection of all entities of a particular entity type in the data-base at any point in time is called an entity set; the entity set is usually referred to using the same name as the entity type. For example, EMPLOYEE refers to both a type of entity as well as the current set of all employee entities in the database.

An entity type describes the schema or intension for a set of entities that share the same structure. The collection of entities of a particular entity type is grouped into an entity set, which is also called the extension of the entity type. 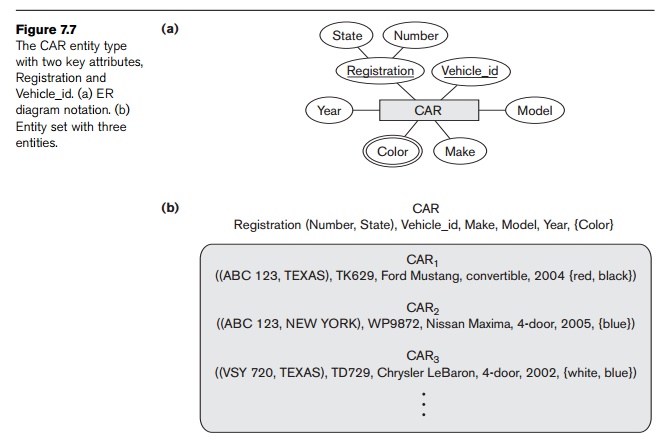 has one or more attributes whose values are distinct for each individual entity in the entity set. Such an attribute is called a key attribute, and its values can be used to identify each entity uniquely. For example, the Name attribute is a key of the COMPANY entity type in Figure 7.6 because no two companies are allowed to have the same name. For the PERSON entity type, a typical key attribute is Ssn (Social Security number). Sometimes several attributes together form a key, meaning that the combination of the attribute values must be distinct for each entity. If a set of attributes possesses this property, the proper way to represent this in the ER model that we describe here is to define a composite attribute and designate it as a key attribute of the entity type. Notice that such a composite key must be minimal; that is, all component attributes must be included in the composite attribute to have the uniqueness property. Superfluous attributes must not be included in a key. In ER diagrammatic notation, each key attribute has its name underlined inside the oval, as illustrated in Figure 7.7(a).

Specifying that an attribute is a key of an entity type means that the preceding uniqueness property must hold for every entity set of the entity type. Hence, it is a constraint that prohibits any two entities from having the same value for the key attribute at the same time. It is not the property of a particular entity set; rather, it is a constraint on any entity set of the entity type at any point in time. This key con-straint (and other constraints we discuss later) is derived from the constraints of the miniworld that the database represents.

In our diagrammatic notation, if two attributes are underlined separately, then each is a key on its own. Unlike the relational model (see Section 3.2.2), there is no con-cept of primary key in the ER model that we present here; the primary key will be chosen during mapping to a relational schema (see Chapter 9).

Value Sets (Domains) of Attributes. Each simple attribute of an entity type is associated with a value set (or domain of values), which specifies the set of values that may be assigned to that attribute for each individual entity. In Figure 7.6, if the range of ages allowed for employees is between 16 and 70, we can specify the value set of the Age attribute of EMPLOYEE to be the set of integer numbers between 16 and 70. Similarly, we can specify the value set for the Name attribute to be the set of strings of alphabetic characters separated by blank characters, and so on. Value sets are not displayed in ER diagrams, and are typically specified using the basic data types available in most programming languages, such as integer, string, Boolean, float, enumerated type, subrange, and so on. Additional data types to represent common database types such as date, time, and other concepts are also employed.

Mathematically, an attribute A of entity set E whose value set is V can be defined as a function from E to the power set P(V ) of V:

The value set provides all possible values. Usually only a small number of these values exist in the database at a particular time. Those values represent the data from the current state of the miniworld. They correspond to the data as it actually exists in the miniworld.

An entity type DEPARTMENT with attributes Name, Number, Locations, Manager, and Manager_start_date. Locations is the only multivalued attribute. We can specify that both Name and Number are (separate) key attributes because each was specified to be unique.

An entity type PROJECT with attributes Name, Number, Location, and Controlling_department. Both Name and Number are (separate) key attributes.

Birth_date, Department, and Supervisor. Both Name and Address may be com-posite attributes; however, this was not specified in the requirements. We must go back to the users to see if any of them will refer to the individual components of Name—First_name, Middle_initial, Last_name—or of Address.

An entity type DEPENDENT with attributes Employee, Dependent_name, Sex, Birth_date, and Relationship (to the employee). 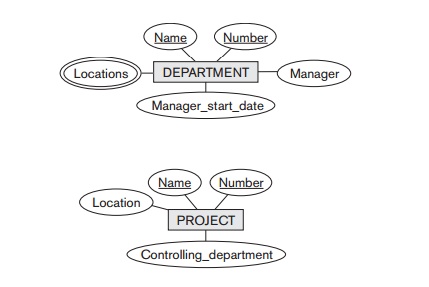