1. Summary of Notation for ER Diagrams

Figures 7.9 through 7.13 illustrate examples of the participation of entity types in relationship types by displaying their sets or extensions—the individual entity instances in an entity set and the individual relationship instances in a relationship set. In ER diagrams the emphasis is on representing the schemas rather than the instances. This is more useful in database design because a database schema changes rarely, whereas the contents of the entity sets change frequently. In addition, the schema is obviously easier to display, because it is much smaller.

Figure 7.14 summarizes the conventions for ER diagrams. It is important to note that there are many other alternative diagrammatic notations (see Section 7.7.4 and Appendix A).

When designing a database schema, the choice of names for entity types, attributes, relationship types, and (particularly) roles is not always straightforward. One should choose names that convey, as much as possible, the meanings attached to the different constructs in the schema. We choose to use singular names for entity types, rather than plural ones, because the entity type name applies to each individual entity belonging to that entity type. In our ER diagrams, we will use the convention that entity type and relationship type names are uppercase letters, attribute names have their initial letter capitalized, and role names are lowercase letters. We have used this convention in Figure 7.2.

As a general practice, given a narrative description of the database requirements, the nouns appearing in the narrative tend to give rise to entity type names, and the verbs tend to indicate names of relationship types. Attribute names generally arise from additional nouns that describe the nouns corresponding to entity types.

It is occasionally difficult to decide whether a particular concept in the miniworld should be modeled as an entity type, an attribute, or a relationship type. In this 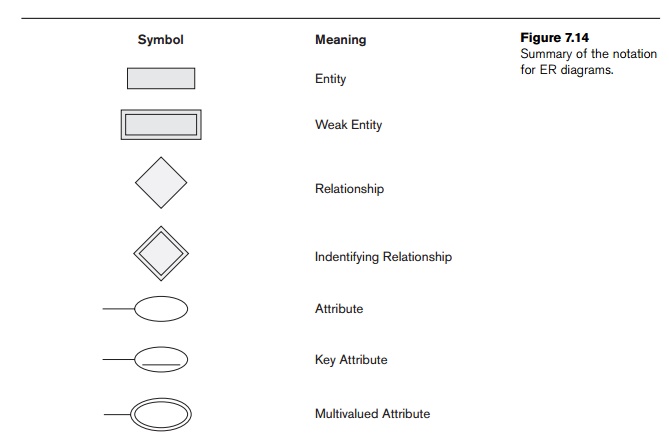 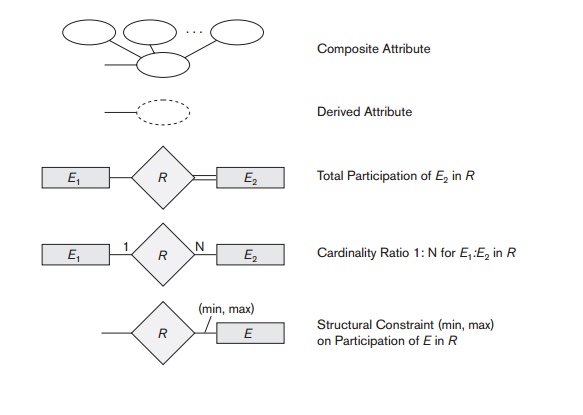 section, we give some brief guidelines as to which construct should be chosen in particular situations.

In general, the schema design process should be considered an iterative refinement process, where an initial design is created and then iteratively refined until the most suitable design is reached. Some of the refinements that are often used include the following:

A concept may be first modeled as an attribute and then refined into a rela-tionship because it is determined that the attribute is a reference to another entity type. It is often the case that a pair of such attributes that are inverses of one another are refined into a binary relationship. We discussed this type of refinement in detail in Section 7.6. It is important to note that in our notation, once an attribute is replaced by a relationship, the attribute itself should be removed from the entity type to avoid duplication and redundancy.

may then choose to create an entity type DEPARTMENT with a single attribute Dept_name and relate it to the three entity types (STUDENT, INSTRUCTOR, and COURSE) via appropriate relationships. Other attributes/relationships of DEPARTMENT may be discovered later.

An inverse refinement to the previous case may be applied—for example, if an entity type DEPARTMENT exists in the initial design with a single attribute Dept_name and is related to only one other entity type, STUDENT. In this case, DEPARTMENT may be reduced or demoted to an attribute of STUDENT.

Section 7.9 discusses choices concerning the degree of a relationship. In Chapter 8, we discuss other refinements concerning specialization/general-ization. Chapter 10 discusses additional top-down and bottom-up refinements that are common in large-scale conceptual schema design.

There are many alternative diagrammatic notations for displaying ER diagrams. Appendix A gives some of the more popular notations. In Section 7.8, we introduce the Unified Modeling Language (UML) notation for class diagrams, which has been proposed as a standard for conceptual object modeling.

In this section, we describe one alternative ER notation for specifying structural constraints on relationships, which replaces the cardinality ratio (1:1, 1:N, M:N) and single/double line notation for participation constraints. This notation involves associating a pair of integer numbers (min, max) with each participation of an entity type E in a relationship type R, where 0 ≤ min ≤ max and max ≥ 1. The num-bers mean that for each entity e in E, e must participate in at least min and at most max relationship instances in R at any point in time. In this method, min = 0 implies partial participation, whereas min > 0 implies total participation. 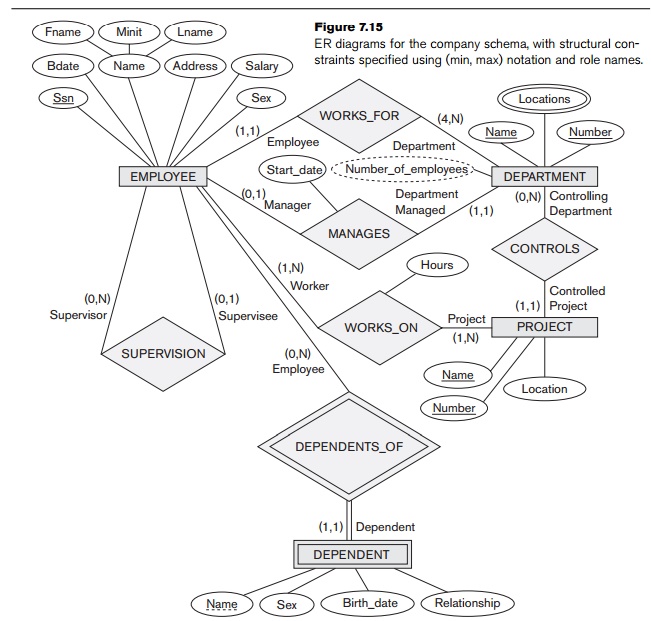 notation is more precise, and we can use it to specify some structural constraints for relationship types of higher degree. However, it is not sufficient for specifying some key constraints on higher-degree relationships, as discussed in Section 7.9.

Figure 7.15 also displays all the role names for the COMPANY database schema.