Home | | The Diversity of Fishes: Biology Evolution and Ecology | Evolution via adjustments in development: heterochrony, paedomorphosis, and neoteny - Fishes
Posted On :  07.08.2017 01:35 am

Evolution via adjustments in development: heterochrony, paedomorphosis, and neoteny - Fishes

Adjustments in developmental rates or timing may be a major way in which new species and even higher taxa evolve from old.

Evolution via adjustments in development: heterochrony, paedomorphosis, and neoteny

Adjustments in developmental rates or timing may be a major way in which new species and even higher taxa evolve from old (Cohen 1984; Mabee 1993). Such a process may explain several phenomena, such as why some adult fish have apparent larval or juvenile traits, or why larval- or juvenile-appearing fishes are reproductively functional, or why closely related species may differ primarily in the duration of an early life history stage, in the time at which a particular structure changes, or in the rate at which different structures grow.

Such alterations in the time of appearance and the rate of development of characters during ontogeny are referred to as heterochronicevents. Heterochrony results from modification of regulatory genes and processes. Juvenile traits in an adult animal are termedpaedomorphic (=“child form”); if juveniles become sexually mature, they are neotenous. Both paedomorphosis and neoteny are brought about as a result of heterochrony (Gould 1977; Youson 1988). Whether paedomorphosis or neoteny, or a related heterochronic phenomenon, produced a particular trait or condition is difficult to determine. 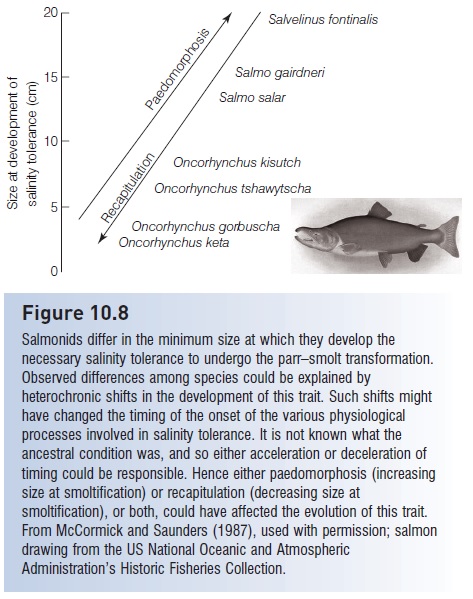 Salmonids differ in the minimum size at which they develop the necessary salinity tolerance to undergo the parr–smolt transformation.

Observed differences among species could be explained by heterochronic shifts in the development of this trait. Such shifts might have changed the timing of the onset of the various physiological processes involved in salinity tolerance. It is not known what the ancestral condition was, and so either acceleration or deceleration of timing could be responsible. Hence either paedomorphosis (increasing size at smoltification) or recapitulation (decreasing size at smoltification), or both, could have affected the evolution of this trait. From McCormick and Saunders (1987), used with permission; salmon drawing from the US National Oceanic and Atmospheric Administration’s Historic Fisheries Collection.

Within fish families, differing forms of heterochrony occurring at different stages in life history may have produced different species, as is suspected among gobioid fishes (Kon & Yoshino 2002b). Regardless, distinguishing among possibilities is not critical to appreciating heterochrony as a major evolutionary process (Fig. 10.8).

Heterochronic changes in transitions between developmental stages, such as the timing of metamorphosis from embryo to larva or from larva to juvenile, is one means by which new species evolve (Youson 1988). Variation in duration of larval life affects age or length at metamorphosis. Elopomorphs as a group are characterized by unique leptocephalus larvae that remain as larvae for long periods, up to 3 years in European eels (e.g., Miller & Tsukamoto 2004). In cladistic terms, this synapomorphy defines the group. Long larval life may be related to the apparently unique ability of leptocephali to absorb dissolved organic matter from the water across a very thin epithelium (Pfeiler 1986). Within the elopomorphs, further variations in developmental rate characterize distinctive species and may suggest processes that led to their separate evolution. For example, Tarpon, Megalops atlanticus, metamorphose at earlier ages and smaller lengths (2–3 months, 30 mm) than most other elopomorphs.

Speciation may result from or be maintained by heterochronic shifts in larval characteristics. Intrageneric separation may have resulted from variation in larval period length in North Atlantic eels, Anguilla rostrata and A. anguilla. The different larval durations, less than 1 year in American eels and 2–3 years in European eels, have a critical effect on their respective distributions. Both species spawn at the same time and in the same Sargasso Sea locale (see  Catadromy). However, American leptocephali transform into juveniles and settle all along the Atlantic coast of North America. European larvae accompanying them in the Gulf Stream are unprepared to metamorphose and are therefore carried past North America and on to Europe. Hence a heterochronic shift in timing of larval metamorphosis helps keep the two species spatially separated.

The evolution of many lamprey species may have also occurred via heterochronic shifts. Many nonparasitic lamprey species can be easily paired with ancestral, parasitic forms. The major differences between ancestor and descendant species involve the length of larval versus adult life, with derived, nonparasitic forms typically having much longer larval periods, rapid metamorphosis, and a relatively short, nonfeeding adult reproductive phase (see Fig 13.6). A delay in the time of metamorphosis would result in just such a difference, essentially creating small adults that retained many larval characters but were reproductively mature (Youson 1988; Finch 1990). 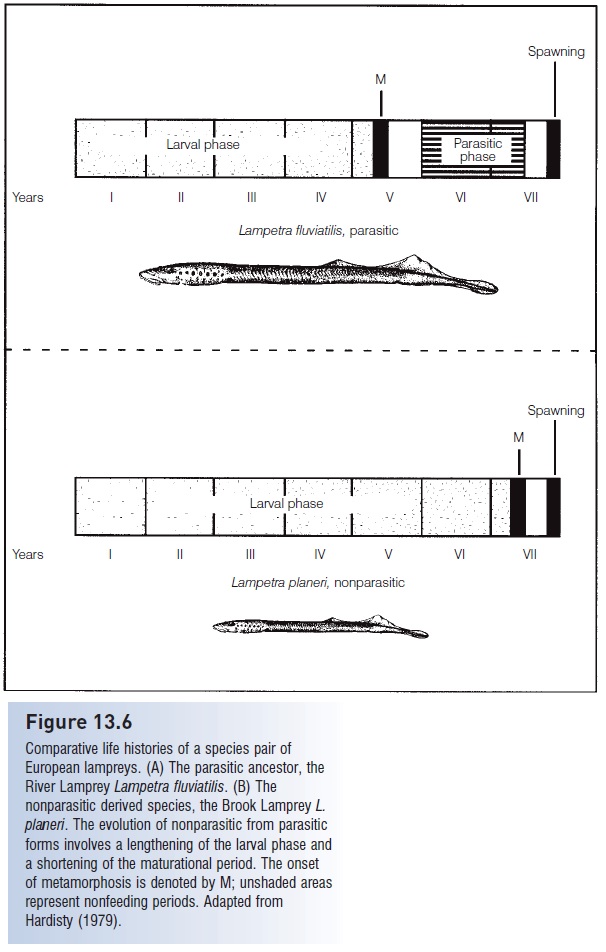 Miniaturization among fishes may often evolve via paedomorphic processes (Weitzman & Vari 1988). Two of the smallest fish species known, a goby, Trimmatom nanus, and a cyprinid, Danionella translucida, reach sexual maturity when only 10 mm long. They retain such larval features as incomplete squamation, limited pigmentation, and partial ossification of the skeleton (Winterbottom & Emery 1981; Roberts 1986; Noakes & Godin 1988). One family, the subtropical and tropical Pacific Schindleriidae, has many neotenic characters, including a functioning pronephros (the early embryonic, segmented kidney of fishes that is drained by the archenephric duct rather than by the ureter), a transparent body, and large opercular gills. Schindleria brevipinguis matures at less than 8 mm, and S. praematura attains sexual maturity when only 1 cm long,

even before it transforms completely from a planktonic “larva” (Leis 1991; Johnson & Brothers 1993; Watson & Walker 2004;  Suborder Gobioidei). Adults of what is arguably the world’s smallest vertebrate species, the 7.8 mm Southeast Asian cyprinidPaedocypris progenetica, possess a number of larval traits, including a long caudal peduncle with a skin fold along its lower edge, many unossified bones, a translucent body, and a neurocranium lacking frontal and several other bones (Kottelat et al. 2006) (Fig. 10.9).

Characteristics of the deepwater, pelagic, ceratioid anglerfishes indicate that they evolved from shallow water, benthic species via neoteny that involved an extended pelagic larval or juvenile phase. Many ceratioids have a gelatinous balloonlike skin as adults, which is also a pelagic larval trait.

Paedocypris progenetica of Indonesia is the world’s smallest vertebrate species, maturing at less than 8 mm length. It retains numerous larval traits, including minimal pigmentation, reduced squamation, and a largely cartilaginous skeleton with many bones absent. An 8.8 mm adult female is shown. From Kotellat et al. (2006), used with permission.

Mature males are distinctly larval in appearance, are even smaller than Paedocypris, and are parasitic on females 10 times their size (Pietsch 2005). Larval-like males also occur in the deepsea black dragonfishes and in the goby genus Crystallogobius (Moser 1981;  The deep sea). Although large size confers an advantage in many species, the production of new species via heterochronic shifts that lead to the retention of small body size shows that small size is also advantageous under certain conditions.