Many of the phenomena described above include fairly precise statements of the age of the fish involved.

Many of the phenomena described above include fairly precise statements of the age of the fish involved. How are such ages determined? Although size is generally correlated with age, suffi cient variation in size at any particular age exists in most species (see below), making it difficult to estimate one from the other with much precision, especially in long-lived or slow-growing fishes. Researchers interested in determining a fish’s age therefore look for structures that increase in size incrementally, in relation to some periodic environmental phenomenon. Many body parts meet this criterion, differing among fish species and among age groups (Fig. 10.5). The most commonly used techniques involve counting naturally occurring growth lines on scales, otoliths (statoliths in lampreys), vertebrae, fin spines, eye lenses, teeth, or bones of the jaw, pectoral girdle, and opercular series. Researchers validate the periodicity of growth by labeling growing structures with dyes or radioisotopes, as part of catch-and-release programs. Representative growth patterns that can be used to age fishes include annual growth rings on scales and daily growth increments on otoliths (Brothers 1984). 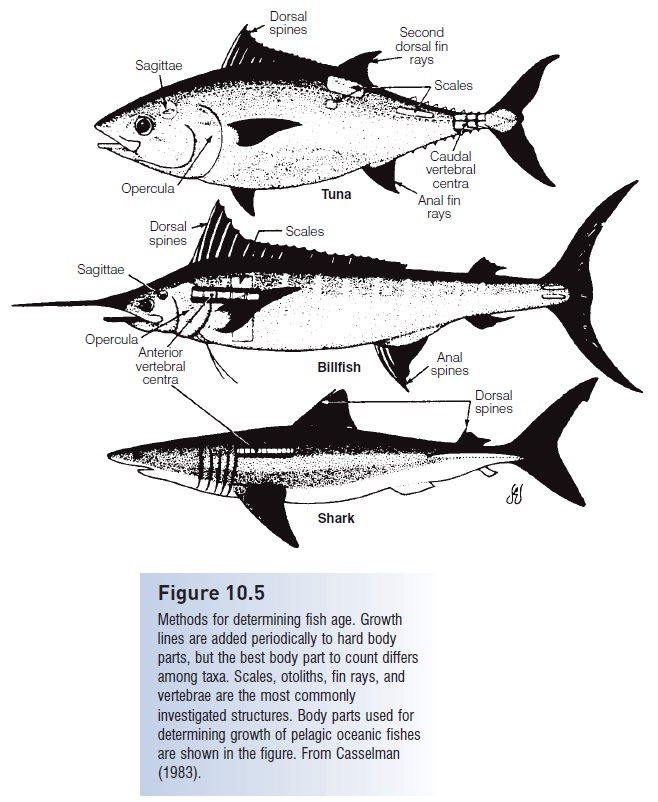 Methods for determining fish age. Growth lines are added periodically to hard body parts, but the best body part to count differs among taxa. Scales, otoliths, fin rays, and vertebrae are the most commonly investigated structures. Body parts used for determining growth of pelagic oceanic fishes are shown in the figure. From Casselman (1983).

Scales in most fishes begin to develop during the late larval stage or during metamorphosis to the juvenile stage. They arise as bony plates in the dermis. Bone-forming cells, termed osteoblasts, lay down layers of roughly concentric circles of bone, termed circuli, along the midbody, starting in the region of the developing lateral line. Scales grow by accretion as more bone is added along their periphery, increasing in thickness but particularly in diameter. Diameter increase reflects body growth; circuli are closer together during periods of slow growth, such as winter at higher latitudes, and wider apart during rapid growth, such as during spring and summer, analogous to the growth rings of trees. This growth pattern creates alternating dark and light bands in the scale that correspond to periods of slow and fast growth, respectively, particularly when viewed with transmitted light (e.g., backlit). In a habitat with distinct growing and non-growing seasons, such as most temperate lakes, one thick and one thin band constitute a year’s growth. The band is referred to as an annular mark or annulus. The number of annuli on a scale therefore gives a record of fish age in years.

In reality, many factors can confuse or interrupt annulus formation. Growth typically slows down when fish enter spawning condition, reflecting the allocation of energy away from growth and into gamete production and reproductive behavior. Decreased growth may result from a decrease in feeding that occurs in many species that engage in parental care (see  Parental care). Such spawning checkswill appear as dense bands and can be mistaken for annuli, leading to overestimation of age.

Bands resembling annuli, termed false annuli, can also result from multiple wet and dry seasons, as occur in many tropical locales, as well as from disease, recovery from injury, responses to pollutants, and forced periods of inactivity and nonfeeding. Feeding often slows down or ceases during summer periods of high water temperature and low oxygen.

Underestimation of age can also result if scales do not begin to develop until the fish is a few years old, as in anguillid eels, or if older fish reach a growth asymptote and hence grow little if at all. Based on scale ages, Pacific Sablefish, Anoplopoma fi mbria, were generally thought to live 3–8 years and were managed as a fast-growing, shortlived, productive fishery. Subsequent studies, involving otolith sections and experimental injections of oxytetracycline into tagged fish, showed that the fish instead lived for 4–40 years, and some for as long as 70 years. However, older fish had essentially stopped growing, both in terms of increasing body and scale sizes, causing underestimation of age. These new analyses forced a major revision in the management strategies applied to the fishery. They point to a widespread realization, namely that different parts of a fish’s body can grow at different rates (e.g., Casselman 1990).Validation of the annular nature of growth rings on scales and other structures is now generally recognized as essential (e.g., Hales & Belk 1992). Validation involves injection of vital dyes or radioisotopes that are quickly incorporated into one circulus of a scale, followed by periodic examination, or some other method whereby the actual time interval represented by an incremental mark can be verified (Beamish & McFarlane 1983, 1987; Stevenson & Campana 1992).

The semicircular canals of the inner ear contain otoliths, which are calcareous structures of characteristic shapes and sizes depending on the species. Otoliths form earlier than scales, often appearing in the otic capsules of embryos prior to hatching (Brothers 1984). Otoliths grow via the accretion of layers of fi broprotein and calcium carbonate crystals. In many fishes, this deposition occurs on a daily basis, relatively independent of most environmental conditions. Hence a one-to-one correspondence of rings (lamellae) to days exists on the otoliths, allowing highly accurate estimates of fish age, particularly in larvae and juveniles (Pannella 1971; Brothers et al. 1976). The width of the daily increments can be a useful indicator of growth conditions and can offer valuable information about when significant events occur during the early life history of an individual, such as length of larval period (Brothers & McFarland 1981). Of the three otoliths, the sagitta is usually largest and the most useful for aging studies. 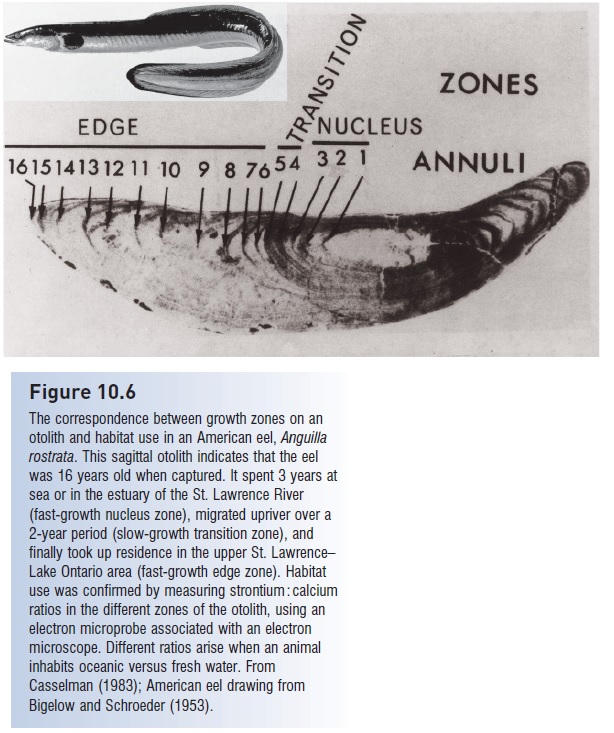 The correspondence between growth zones on an otolith and habitat use in an American eel, Anguilla rostrata. This sagittal otolith indicates that the eel was 16 years old when captured. It spent 3 years at sea or in the estuary of the St. Lawrence River (fast-growth nucleus zone), migrated upriver over a 2-year period (slow-growth transition zone), and finally took up residence in the upper St. Lawrence– Lake Ontario area (fast-growth edge zone). Habitat use was confirmed by measuring strontium : calcium ratios in the different zones of the otolith, using an electron microprobe associated with an electron microscope. Different ratios arise when an animal inhabits oceanic versus fresh water. From Casselman (1983); American eel drawing from Bigelow and Schroeder (1953).

As fish age, lamellae may grow too close together to allow resolution of daily increments. However, seasonal and annual records are still evident on these hard body parts. Changes in spacing of larger zones may indicate not only age but also when fish move among habitats that are more or less favorable for growth, as when eels migrate upriver or salmon smolts move from food-poor freshwater rivers to food-rich and saline estuaries (Fig. 10.6). Because the chemistry of the accreted layers reflects the chemistry of the water in which a young fish develops, the otolith has been likened to an event recorder, allowing determination of when and which habitats growing fish occupy. Such information can be useful in determining the geographic origins of recruits to an area or into an exploited or depleted population, as well as periods of occupancy of different water masses and pathways of dispersal (Thorrold et al. 2002; Palumbi et al. 2003; Patterson et al. 2005).