It can be divided into three periods of time in history, · Early Christian era · Middle age · The dawn of modern Nursing

It can be divided into three periods of time in history,

Nursing in pre-Christian times, religious beliefs has great bearing on the caring for the sick suffering. Christianity believed that one should render services of love to humanity without any reward. It was equal to one’s sincere love to god. This principle was absorbed in nursing and helped to improve the status of a nurse. Some of the examples of such women are as follows.

·           She built a hospital for strangers, pilgrims and travellers and for the sick.

·           She lead a group of high rank with freedom of women and induce them in works of charity.

Monks and nuns devoted their life to the care and services of the poor and sick.

Late in the 12th and 13th centuries nursing become differentiated from medicine and surgery.

The Dawn of Modern Nursing

From the late 1700s through 1853, the manner in which the sick were care. Remain essentially unchanged. In Europe the dawn of Nursing was underway. The deaconess institutes of kaiserswerth, Germany was established in 1836 by pastor Theodore Fliednes, to train the Deaconesses to care for the sick and the provision of social influence throughout the world.

Miss Florence Nightingale known for her devotion to the services to the poor and the sick and is also aware of what she did for humanity and to raise the status of nursing profession. 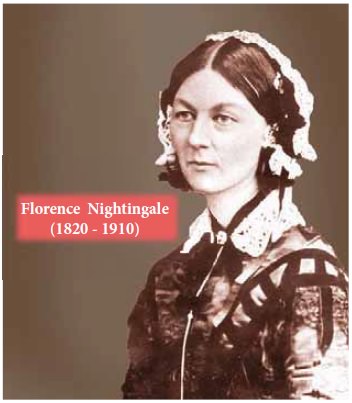 Florence Nightingale was born in a wealthy English Family, on 12th may 1820. She had great desire to become a nurse. She was dissatisfied with the daily routine life style of the upper-class women. She had classical education which provided her with an understanding of the circumstances of the world in which she lived. She became aware of the inadequate care being provided in hospitals. She accompanied her mother on visits to the ill patients at hospitals. She visited hospitals in England and Europe.

She recognized that nurses require 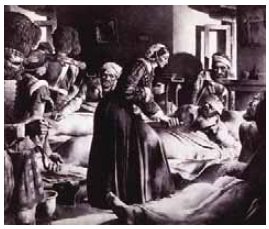 Nightingale was admitted to the training program at the school at Kaiser Werth in1850s After her training, in 1853 she was appointed as superintendent of the institution for the care of the sick gentlewomen in London. She had an opportunity to give her best services to the wounded soldiers in the Crimean war in 1854, she attended thousands of wounded and dying soldiers. For which she was righty known as “The Lady with the Lamp” 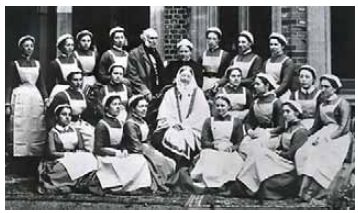 Miss. Nightingale introduced numerous improvements in military hospitals, she also founded the first training school for nurses St. Thomas Hospital at London in 1860. She shared her ideas about Nursing and Nursing education. Florence Nightingale paved the way for the ultimate recognition of nursing as a superior, compassionate profession.

Miss. Nightingale was the first to mention Holism (Treating the whole patient) in Nursing. Nightingale was the founder of modern nursing education. She planned a complete public health program. Despite her ill health, she worked for the development of nursing services without tailing sufficient rest.

The modified Hippocratic Oath arranged by Mrs. Lystra E. Gretter and her committee for the Farr and Training School for Nurses, Detroit is called the Florence Nightingale Pledge as a token of esteem for the Founder of Modern Nursing. 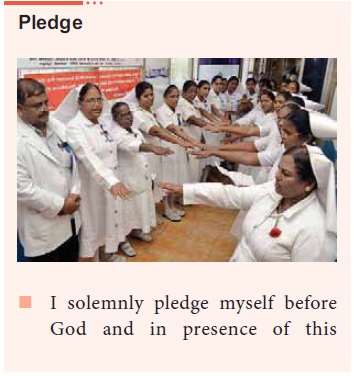 When you think of a nurse, what image comes immediately to mind? A lady in a crisp white frock, with a starched white cloth apron, cap in her hair, wearing white rubber shoes, white socks and white belt; the quiet essential image of standard nursing uniform for nurses worldwide. However, the concept of nursing uniforms has changed now, with nurses wearing scrub sets and other flexible clothing.

Nursing in the past Nightingale era turned into a more respectable job with schooling systems and uniforms for nurses. Nurses had to wear a hat and band to distinguish themselves as nurses and display their nursing rank. Fresh nurse students would wear ribbon bands of pink, blue, or other pastel colours. Senior nurses and nursing teachers would wear black ribbon bands to indicate seniority. 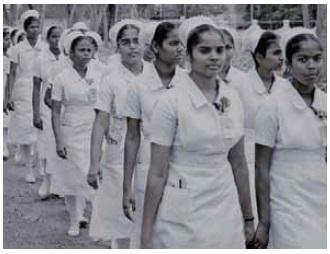