Eutrophic fermentation was the name given by one of the authors to the experi-mental, wet, in-vessel, aerobically enhanced biodegradation process he designed to investigate accelerated decomposition, principally as an alternative to anaerobic digestion.

Eutrophic fermentation was the name given by one of the authors to the experi-mental, wet, in-vessel, aerobically enhanced biodegradation process he designed to investigate accelerated decomposition, principally as an alternative to anaerobic digestion. Fermentation in this context relates to the wider application of the word to encompass all microbial breakdown and not simply the anaerobic pro-duction of alcohol and eutrophic refers to the nutrient-rich environment within which it takes place.

The process arose as a result of research into the enhanced aerated remediation of post-anaerobic digestion liquor. The idea of introducing air into liquid or slurrified waste, as was discussed is well established as a means of treatment. A laboratory prototype treatment was developed for the specific effluent and was successfully trailed at pilot scale, before subsequently being further developed and extended to the treatment of biowaste.

Eutrophic fermentation involves rendering the waste into a fine slurry, which is then contained within a bioreactor (Figure 8.4), aerated by means of bubble diffusers at the base of the vessel, mixed and heated to around 35 ◦ C. Within this environment, the input waste breaks down to leave only about 10% of the original volume as recoverable solids within 35 days. The process liquor itself is characteristically less strong than for anaerobic digestion and typically contains only some 6 – 10% suspended solids. Analysis of this liquid by the Agricultural Development Advisory Service (ADAS) has indicated that it has some potential fertiliser use, based on key performance indicators such as nitrogen, phosphorous and potassium levels, electrical conductivity, generalised nutrient content and heavy metal residues. The results are shown in full in Tables 8.4 and 8.5. 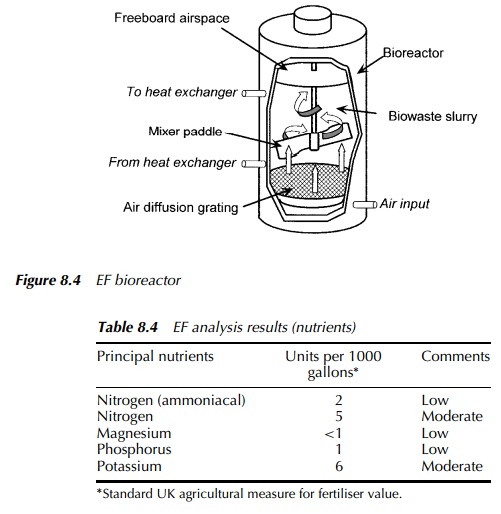 With a ‘satisfactory’ pH of 6, a ‘low’ BOD of 2790 mg/l, low ammoniacal nitrogen and the likely slow release of much of the total nitrogen content over several months, ADAS concluded that the liquor was a ‘useful source of nitrogen and potash for crop growth’. 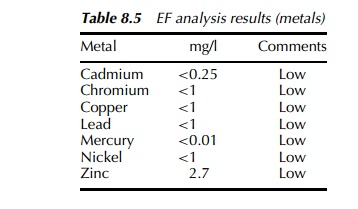 Though this method proved itself remarkably efficient in laboratory and inter-mediate trials, the company for which it was developed subsequently abandoned further research into biological waste treatment and, consequently, EF has never been taken to pilot scale. As a result, it is not possible to say how well it might perform, though for such aerobic processes utilising a completely mixed, suspended growth regime, even relatively small-scale studies tend to be fair rep-resentations of full-scale performance. This is particularly relevant to this system, as the hydrolysed organics are directly assimilated by the resident microbes, rather than simply accumulating in the process liquor.

In the foreseeable future, it is unlikely that this approach will make the tran-sition to commercial application, not least as a result of outstanding intellectual property questions. Nevertheless, it stands as a worthwhile example of how alter-native technologies can be developed to meet particular needs.

The issue of local circumstance is a recurrent theme throughout the whole of environmental biotechnology and probably so in waste management as much, if not more, than in any other aspect. As a consequence, it is highly unlikely that any one technology will establish itself as the monopoly treatment, which effectively also guarantees the scope for the further development of existing or novel minority biotechnologies.