For centuries, gardeners and horticulturalists have encouraged biodegradable waste to break down to produce stable, nutrient-rich compost for use in pots or directly for improving the soil.

For centuries, gardeners and horticulturalists have encouraged biodegradable waste to break down to produce stable, nutrient-rich compost for use in pots or directly for improving the soil. This application of the natural, exothermic process of aerobic decomposition, is familiar and time-honoured. More recently, however, composting has been the recipient of increased attention as a poten-tial means of treating biowaste on a municipal basis. Though the scale of such operations imposes certain restrictions of its own, generally, putrescible matter decomposes more efficiently and completely when oxygen is readily available. This leads to proteins being degraded to nitrogen or ammonia and ultimately mineralised to nitrate, while fats and carbohydrates are broken down to carbon dioxide and water, via organic acids. This is, of course, purely a mass flow overview of the process since a proportion of the material becomes incorporated into microbial cells, as the decomposers themselves multiply and grow. Even under optimised environmental conditions, there are a number of rate-limiting factors in the process, which include extracellular hydrolytic enzyme production, the speed of hydrolysis itself and the efficiency of oxygen transfer. These may, in turn, be influenced by other aspects such as the particle size and nature of the biowaste material to be treated.

In a practical application, this can be a major consideration as the kinds of biowaste to be composted can vary greatly, particularly when derived from municipal solid waste, since seasonal variation, local conditions and climate may produce a highly heterogeneous material. On the other hand, biowastes from food processing or horticulture can be remarkably consistent and homogeneous. Accordingly, the details of breakdown may be very complex, involving a number of intermediary compounds and different organisms utilising various biological pathways. However, in broad terms, the composting process can be split into the following four distinct general phases, which are chiefly defined by their temperature characteristics.

·           Growth phase (c. 22 ◦C – c. 40 ◦C). Growth and reproduction of microbes, re-sulting in a high respiration rate and consequent elevation of temperature to a mesophilic range.

For a municipal scheme, as shown schematically in Figure 8.1, time and space at the facility will be at a premium, so the faster the biowaste can be colonised by a suitable microbial culture, the sooner the treatment space will be ready to accept a new load for processing. Hence the principal focus of environmental biotech-nology for the optimisation of conditions for enhanced biological breakdown is in reducing the time-lag inherent in the latent phase. One of the major means to achieve this is to ensure that the material to be treated is presented in as suitable a form as possible. This typically involves some form of grinding or shredding to produce an ideal physical particle size, but biochemical considerations are every bit as important in this respect. At the same time as breaking down biowaste into simpler compounds, the process also brings about a change in the carbon to nitrogen (C:N) ratio of the material, as substantial quantities of organic carbon are converted to carbon dioxide. The initial C:N ratio is an important factor in the success of composting, since a ratio much more than 25:1 can inhibit the min-eralisation of nitrogen and adversely affect the product’s final maturation. This latter aspect has clear implications for any intended use of the end-product as a fertiliser or soil enhancer, particularly for a large-scale, commercial operation. To take account of this, facilities accepting mixed-source waste for composting, often find it necessary to undertake a measure of mixing and blending to ensure 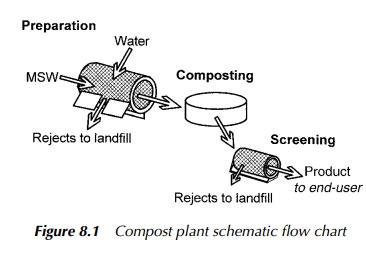 an appropriate balance. It is possible to categorise different kinds of biowaste according to their carbon/nitrogen content, as illustrated in Table 8.3. 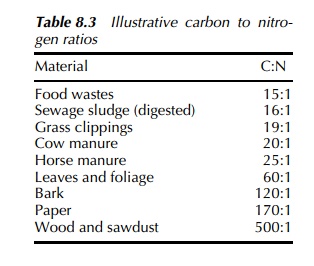 Most plants obtain the nitrogen they require as nitrate. The mineralisation of nitrogen is performed by two genera of bacteria, Nitrosomonas, responsible for converting ammonia to nitrite and Nitrobacter which completes the nitrification.

Inactivated at temperatures above 40 ◦ C and with a relatively slow growth rate, their activity is largely confined to the maturation phase. Thus, the proper min-eralisation of nitrogen can only be achieved after the growth and thermophilic stages have been completed, which themselves require a suitable C:N balance in the initial feedstock in the first place.

A number of different organisms are involved in composting, including bacte-ria, fungi, protozoa, mites, nematodes, insects and annelids, there being a natural succession of forms allied with the four phases of the process. Thus the initial decomposition is brought about by mesophilic bacteria in the main, until their increased activity raises the temperature into the range favoured by thermophilic organisms. These thermophiles then play a major role in the breakdown of carbo-hydrates and proteins, before they themselves become inhibited by the 70 – 75 ◦ C heat of the composting pile. Later, as the temperature begins to drop, actino-mycetes become the dominant group, giving the ageing compost a characteristic white-grey appearance. Although largely confined to the surface layers, they are of considerable importance in the decomposition of cellulose and lignin, which are two of the more difficult components of biowaste to break down.

The microbial component of compost is an area of particular future potential, particularly as a measure of product quality. While simple chemical analysis has traditionally been used to assess composts, concentrating on NPK values and placing it on the same footing as artificial fertiliser, there has been a growing realisation that its complex nature means that this does not tell the full story. The potential benefits in terms of soil flora improvement and plant pathogen sup-pression cannot be inferred from a compost’s gross mineral contribution and so, in an attempt to produce a more comprehensive yardstick, some producers and users have begun to investigate assessment based on microbiological profiling. Pioneering work in the USA, by BBC Laboratories of Arizona, has led to the development of the first predictive tool for the value of a compost as a soil micro-bial inoculant, based on the concentrations of six key classes of micro-organisms present (Bess 1999). The marketing of biowaste-derived products is made more difficult by a number of factors which lie outside of the scope of this work, most particularly a lack of a recognised and universally agreed standard. The applica-tion of microbiological criteria, in conjunction with the likes of mineral analysis and maturity assessment, could lead to significantly better overall characterisation of composts. Moreover, there seems no reason why this approach should not be extended to all biowaste-derived soil amendments, enabling direct comparisons to be made and the suitability of any given product for a particular use to be measured objectively.