The nature of anaerobic digestion inevitably means that its applications to waste management are relatively large-scale operations, there being no effective equivalent of home composting.

The nature of anaerobic digestion inevitably means that its applications to waste management are relatively large-scale operations, there being no effective equivalent of home composting. Hence, whether the application is as an onsite treatment for process effluent or as part of a centralised municipal waste initiative, the approach relies heavily on engineering, a schematic plant being shown in Figure 8.2. This is in clear contrast with composting and, together with the attendant additional costs, probably goes further to explain the overall lower 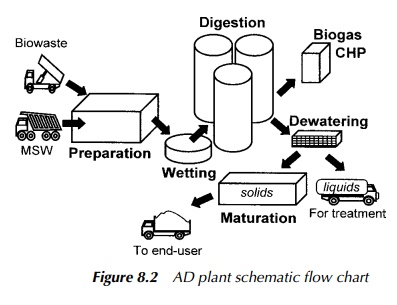 take-up of this technology than any other factor. It should also be apparent that more resources, and primarily a more skilled workforce, are essential prerequisites for success. However, for wastes which are particularly suited to this form of biotechnology, a number of cost-benefit analyses over the years have shown that these drawbacks may often be outweighed by the advantages inherent in the system. As with so many practical applications of environmental biotechnology, there is seldom one catch-all solution and the most appropriate approach can only really be judged on the specifics of the problem. There will always be cases when either composting or AD is self-evidently the most suitable route; when the matter is less clear-cut, however, the technology decision is often much more difficult to make.

There are many ways in which anaerobic digestion systems may be categorised as will be briefly discussed below. However, it is important to realise that, irrespective of their individual construction, they all fundamentally consist of isolated vessels of some kind, designed to exclude air and maintain internal conditions at the optimum for bacterial action. It is possible to describe systems treating slurries of 15% total dry solids (TDS) or less as ‘wet’, or ‘dry’ if their TDS exceeds this figure. Alternatively, the temperature range at which they are operated can be used, thus leading to defining AD systems as either mesophilic or thermophilic.

The loading regime adopted can also be a useful means of distinguishing digester types for some purposes, allowing a distinction to be drawn between ‘batch’ and ‘continuous’ systems. The former are filled in a single go, then per-mitted to digest the contents before being emptied and recharged, while the latter have a continuous cycle of new biowaste being added and processed material being drawn off. Figure 8.3 shows the interrelationship of these various branches of the AD family tree. 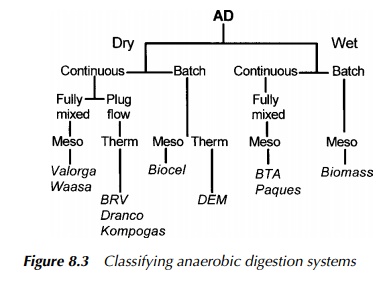 However these are, in effect, operational criteria and as such, though useful in themselves, they can tend to unite dissimilar technologies within essentially artificial groupings, giving little clue as to which best suits what type of biowaste.

For this, an examination of aspects of the digester design and engineering prin-ciples can often provide a better insight, as in the following descriptions of some of the major examples.

These generally feature a horizontal flow of biowaste through the digester vessel, and are suitable for a wide range of materials. The Valorga process, with its patented gas recirculation and mixing system, is based on this approach.

These digesters have a fixed growth plate on which a bacterial biofilm is estab-lished, digestion taking place on this surface. They are ideal for relatively weak biowastes with low solids content, but are of less use in other applications.

In this design, the biomass derived during processing is recycled after dewatering to increase the retention time for the solids. This approach is typically used to treat high strength, industrial biowastes.

Intended to treat slurries and liquid biowastes, this system is essentially the same as the preceding CMCR design, but without the need for the solids’ recycle.

Sometimes termed the expanded bed reactor, this system relies on an inter-nal microbial growth medium, which is fluidised by the waste liquid circulat-ing within it. Accordingly they are only suitable for liquid biowastes or very dilute slurries.

Physically separating the stages of AD into different reactors, these systems are principally of use as experimental tools for increasing understanding of the pathways and mechanisms of the anaerobic digestion process. They are featured here for completeness, but they do not generally have any commercial application.

These systems hold relatively high numbers of active bacteria, which makes them suitable for treating biowastes of low solids content and they are commonly used to process high-strength industrial waste liquids or light suspensions.

From all of this discussion, it should be obvious that, however proprietary AD technologies are classified, no one type is universally ideal or superior, each having certain characteristics which make it appropriate for particular wastes and less suitable for others. This means, of course, that although comparisons of the various approaches are of great interest to potential users, in practice they are difficult to make in any meaningful way. Even certified data from an operating plant can only be taken as broadly indicative of how a similar one might perform elsewhere, especially in respect of breakdown efficiency and biogas generation or quality.