Independently propounded ethical theories are many and are very diverse in nature.

Independently propounded ethical theories are many and are very diverse in nature.

Deontological ethics or deontology (from Greek δέον, deon, "obligation, duty"; and - λογία, -logia) is an approach to ethics that determines goodness or rightness from examining acts, or the rules and duties that the person doing the act strove to fulfill. This is in contrast to consequentialism, in which rightness is based on the consequences of an act, and not the act by itself. In deontology, an act may be considered right even if the act produces a bad consequence, if it follows the rule that "one should do unto others as they would have done unto them", and even if the person who does the act lacks virtue and had a bad intention in doing the act. According to deontology, we have a duty to act in a way that does those things that are inherently good as acts ("truth-telling" for example), or follow an objectively obligatory rule (as in rule utilitarianism). For deontologists, the ends or consequences of our actions are not important in and of themselves, and our intentions are not important in and of themselves. Immanuel Kant's theory of ethics is considered deontological for several different reasons. First, Kant argues that to act in the morally right way, people must act from duty (deon). Second, Kant argued that it was not the consequences of actions that make them right or wrong but the motives (maxime) of the person who carries out the action. Kant's argument that to act in the morally right way, one must act from duty, begins with an argument that the highest good must be both good in itself, and good without qualification. Something is 'good in itself' when it is intrinsically good , and 'good without qualification' when the addition of that thing never makes a situation ethically worse. Kant then argues that those things that are usually thought to be good, such as intelligence, perseverance and pleasure, fail to be either intrinsically good or good without qualification. Pleasure, for example, appears to not be good without qualification, because when people take pleasure in watching someone suffering, this seems to make the situation ethically worse. He concludes that there is only one thing that is truly good:

Nothing in the world—indeed nothing even beyond the world—can possibly be conceived which could be called good without qualification except a good will.

Kantian ethics are deontological, revolving entirely around duty rather than emotions or end goals. All actions are performed in accordance with some underlying maxim or principle, which are deeply different from each other; it is according to this that the moral worth of any action is judged. Kant's ethics are founded on his view of rationality as the ultimate good and his belief that all people are fundamentally rational beings. This led to the most important part of Kant's ethics, the formulation of the categorical imperative, which is the criterion for whether a maxim is good or bad. Simply put, this criterion amounts to a thought experiment: to attempt to universalize the maxim (by imagining a world where all people necessarily acted in this way in the relevant circumstances) and then see if the maxim and its associated action would still be conceivable in such a world. For instance, holding the maxim kill anyone who annoys you and applying it universally would result in a world which would soon be devoid of people and without anyone left to kill. Thus holding this maxim is irrational as it ends up being impossible to hold it. Universalizing a maxim (statement) leads to it being valid, or to one of two contradictions — a contradiction in conception (where the maxim, when universalized, is no longer a viable means to the end) or a contradiction in will (where the will of a person contradicts what the universalization of the maxim implies).

The first type leads to a "perfect duty", and the second leads to an "imperfect duty." Kant's ethics focus then only on the maxim that underlies actions and judges these to be good or bad solely on how they conform to reason. Kant showed that many of our common sense views of what is good or bad conform to his system but denied that any action performed for reasons other than rational actions can be good (saving someone who is drowning simply out of a great pity for them is not a morally good act). Kant also denied that the consequences of an act in any way contribute to the moral worth of that act, his reasoning being (highly simplified for brevity) that the physical world is outside our full control and thus we cannot be held accountable for the events that occur in it.

Virtue ethics describes the character of a moral agent as a driving force for ethical behavior, and is used to describe the ethics of Socrates, Aristotle, and other early Greek philosophers. Socrates (469 BC – 399 BC) was one of the first Greek philosophers to encourage both scholars and the common citizen to turn their attention from the outside world to the condition of humankind. In this view, knowledge having a bearing on human life was placed highest, all other knowledge being secondary. Self-knowledge was considered necessary for success and inherently an essential good. A self-aware person will act completely within his capabilities to his pinnacle, while an ignorant person will flounder and encounter difficulty. To Socrates, a person must become aware of every fact (and its context) relevant to his existence, if he wishes to attain self-knowledge. He posited that people will naturally do what is good, if they know what is right. Evil or bad actions are the result of ignorance. If a criminal was truly aware of the mental and spiritual consequences of his actions, he would neither commit nor even consider committing those actions. Any person who knows what is truly right will automatically do it, according to Socrates. While he correlated knowledge with virtue, he similarly equated virtue with happiness. The truly wise man will know what is right, do what is good, and therefore be happy. 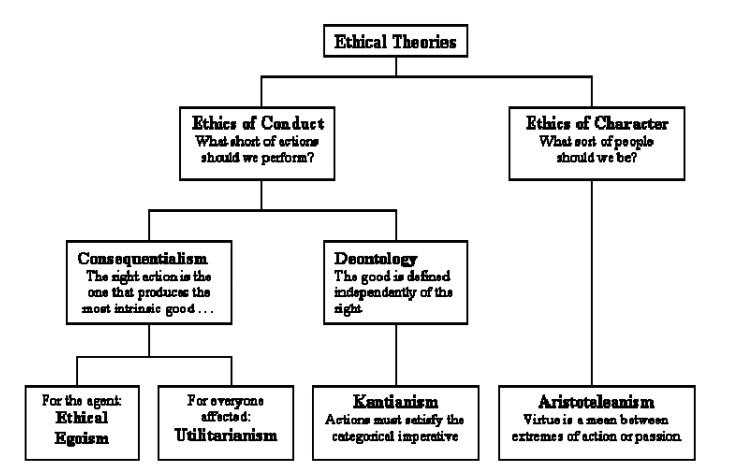 Philosophers have found ethical theories useful because they help us decide why various actions are right and wrong. If it is generally wrong to punch someone then it is wrong to kick them for the same reason.

We can then generalize that it is wrong to ―harm‖ people to help understand why punching and kicking tend to both be wrong, which helps us decide whether or not various other actions and institutions are wrong, such as capital punishment, abortion, homosexuality, atheism, and so forth. All of the ethical theories have various strengths and it is possible that more than one of them is true (or at least accurate). Not all moral theories are necessarily incompatible. Imagine that utilitarianism, the categorical imperative, and Stoic virtue ethics are all true. In that case true evaluative beliefs (e.g. human life is preferable) would tell us which values to promote (e.g. human life), and we would be more likely to have an emotional response that would motivate us to actually promote the value. We would feel more satisfied about human life being promoted (e.g. through a cure to cancer) and dissatisfied about human life being destroyed (e.g. through war). Finally, what is right for one person would be right for everyone else in a sufficiently similar situation because the same reasons will justify the same actions.