A lot of equipment is required at railway stations and yards for the efficient working of the railway system. This equipment serves the following purposes.

A lot of equipment is required at railway stations and yards for the efficient working of the railway system. This equipment serves the following purposes.

(a)  Providing facilities for the convenience of passengers-platforms, foot over bridges, and subways.

The details of some of the important railway equipment are given in this chapter.

The following types of platforms are provided on Indian Railways.

These platforms are provided for the loading and unloading of goods and parcels onto and from wagons. The essential features of these goods platforms are the following.

(a)  A goods platform is normally surfaced with bituminous carpet or concrete. In the case of light traffic, moorum or water-bound macadam can also be used.

(c)  Adequate storage accommodation is provided on goods platforms for the storage of goods and parcels.

(d) Mobile cranes or fixed overhead gantry cranes are provided for the handling of bulky and heavy parcels.

2 Foot Over Bridges and Subways

Foot over bridges are provided for the movement of passengers and light baggage from one platform to another. Bulky or heavy goods are taken from one platform to another by means of a handcarts, which are carried across the tracks near the end of the platform in order to reach the requisite platform. Some stations are also provided with subways for the movement of the passengers and goods between platforms.

Cranes are normally provided in goods sheds to load and unload bulky or heavy material such as heavy machines and logs from wagons. These are normally of three types.

Fixed jib crane This crane is fixed at a convenient location on the goods platform for the purpose of loading and unloading bulky and heavy goods from wagons.

Mobile crane This crane is mounted on a wagon or a truck and can be moved anywhere on the platform as per requirement to load or unload bulky parcels.

Overhead gantry cranes It consists of two horizontal girders or beams supported on a number of vertical posts. A travelling platform is fixed in between the two girders, which is fitted with equipment for hoisting goods and is capable of moving to and fro on the girders. Wagons or road vehicles are brought under the gantry for loading and unloading materials.

A weigh bridge is used to weigh a loaded wagon so as to get an idea of the weight of its contents. It is basically a small length of track on a platform that is supported on beams. The beams are located in a pit under the track and rest on knife edges attached to levers. When a wagon is placed on the weigh bridge, its weight is indicated by a pointer on a graduated disc located in an adjoining structure. A weigh bridge is normally provided on a siding and not on a through track.

The loading gauge is the gauge or profile up to which a vehicle can be loaded in order to maintain a minimum clearance between the loaded top of the wagon and the underside of a structure such as a bridge, tunnel, or signal post. The dimensions of the load of the wagon are kept within the fixed limits by erecting a loading gauge across the track in the shape of a steel frame, which causes an obstruction if the wagon is loaded to an extent that exceeds the loading gauge (see in old pages).

Loaded wagons whose dimensions exceed the normal permissible loads are known as oversized dimensioned consignments (ODCs). ODC parcels can also be sanctioned up to a certain level after taking the following precautions.

(a)  Trains carrying ODCs should move at a restricted speed, which is specified for the purpose.

(b) Such trains should not move at night.

(c)  Train carrying ODCs should be accompanied by a supervisor whose duty is to ensure the safely of the train along the route.

End loading ramps (Fig. 27.1) are provided to allow the unloading of the wagons at their rear end. Such ramps are also used for unloading cars and other mobile vehicles. An end loading ramp has the following essential features. 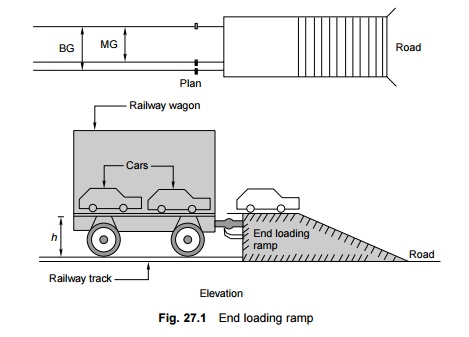 (a)  It has a dead end siding with a buffer stop and a platform with a ramp.

(c)  A small gap is maintained between the buffer stop and the ramp platform to minimize the damage to the platform. This gap is covered by the hinged plates of the wagon while it is being unloaded.

Turn round sheds These are provided for servicing locomotives and bringing them back to the homing sheds. They may also be provided for attending to certain minor repairs. These sheds are normally designed to hold about 30 to 50 locomotives.

Ashpits (also called de-ashing Pits) (Fig. 27.4) are provided to collect the ashes falling from the locomotives. They are rectangular in shape and of a depth of about 1 m and are lined with fire bricks. The length of the ashpits should be adequate so that the longest locomotive can be de-ashed on the pit. The length is normally 15.9 m (52 ft) for BG locomotives. The ashpits are suitably sloped from the centre towards the ends so that water can be drained effectively. 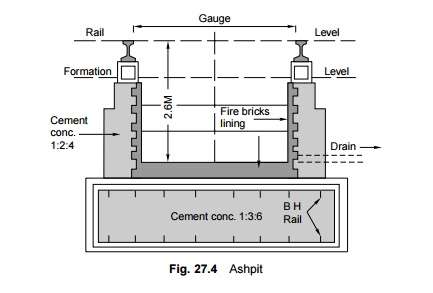 The ashpits should be cleaned as often as possible. The ashes should first be dumped outside the pit and subsequently removed and stored at a suitable place for further disposal. The area around the ashpit should be paved and ample space should be provided for the picking up and storage of cinder.

Water columns (Fig. 27.5) are provided to supply water to the locomotives. A water column consists of a vertical pipe with a surveilling arm of either a horizontal shape or the shape of a swan's neck. A bay hose spout is provided at the end of the arm to enable water to be diverted to the opening in the engine tender. A foot valve is fixed inside the water column and water is made available from a suitably located high service tank. 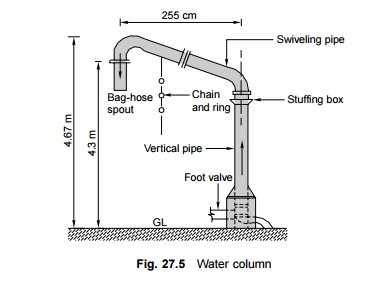 Water columns are provided in locomotive yards as well as at various stations, where engines are required to be watered and fuelled.

A turntable (Fig. 27.6) is a device used for changing the direction of a locomotive. It is normally provided at terminal stations, locomotive yards, and marshalling yards. 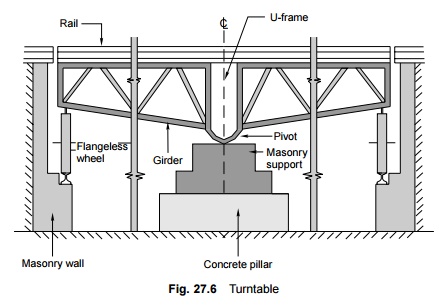 Triangles are used for reversing the direction of engines at locations where providing a costly turntable may not be justified and where the available area is adequate for the provision of a triangle. Triangles are normally provided at the terminals of short lines. The details of a triangle are given in Chapter 15.

This is a device for transferring vehicles from one track to a parallel one without the use of a turnout or a crossover. It is quite a costly arrangement and is preferred only in workshops where space is limited and a coach or locomotive is required to be shifted from one shop to another on a nominated line. 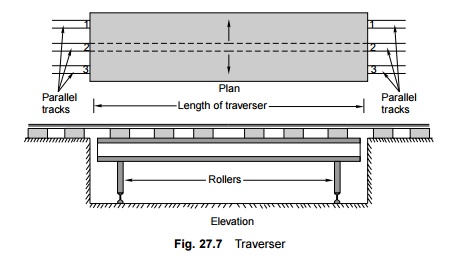 A traverser (Fig. 27.7) consists of a platform with a track that is mounted on small wheels or rollers, which can traverse to and fro and can fall in line with the track on either side of the traverser. The following steps are involved in transferring a vehicle standing on track 3 on the left-hand side of the traverser to track 2 on the right-hand side.

1.  The traverser is aligned with track 3 on the left-hand side.

2.  The vehicle is then transferred to the traverser track.

3.  The traverser is then shifted so as the align it with the track on the right-hand side.

4.  The vehicle is then transferred to track 2 on the right-hand side.

Terminal stations are provided with the facility for washing carriages so that passenger bogies can be cleaned and washed properly. This consists of two or three long sidings that can accommodate the entire length of the rake and washing platforms that are provided between the sidings. The salient features of these washing platforms are the following.

(a)  Washing platforms are long platforms of a height equal to the height of the carriage floor that are generally made of cement concrete. In the case of BG lines their width is about 0.61 m.

(b) The washing platform is equipped with a number of hydrants for washing the carriages. An adequate water supply is made available to ensure that the pressure of the water inside the hydrant is sufficient.

(c)  A washing platform is normally provided between two tracks so that two carriages can be washed simultaneously.

(d) The tracks are supported on masonry structures and have adequate arrangement for the drainage of water.

Buffer stops (Fig. 27.8) or 'snag dead ends' are provided at the end of a siding to ensure that the vehicles stop while still on the track and do not go off it. The buffer stop is a type of barrier placed across the track which stops the vehicles from going beyond the selected point. Its essential features are the following.

(a)  The buffer stop should be structurally strong to take the impact of a rolling vehicle.

(b) It should have a buffer disc with a cross-sleeper, which is normally painted red. A red lamp should be provided at its centre for night indication.

(c)  Normally the track should be straight for some distance near the buffer stop.

(d) It should be visible from a long distance. 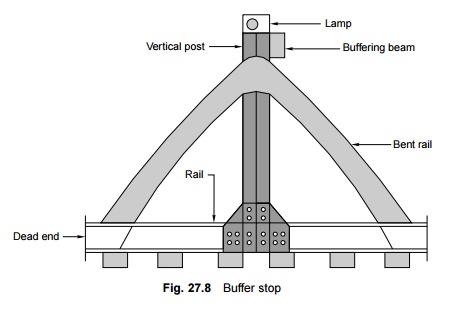 It is normal practice to isolate a through running line from a siding so that a vehicle standing on the siding does not accidentally roll onto the running line and foul the same. A scotch block or derailing switch is provided on a siding or shunting neck to ensure that the vehicle does not go beyond a particular point and that if this happens, the vehicle gets derailed.

Scotch block A scotch block (Fig. 27.9) is a wooden block placed on the rail and properly held in its place with the help of a device to form an obstruction. Once it is clamped in position, the scotch block does not allow a vehicle to move beyond it. 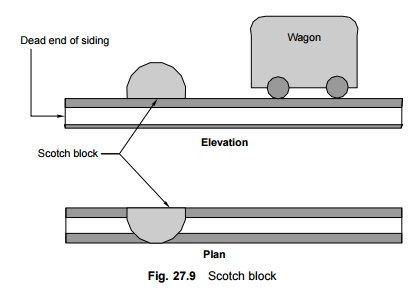 Derailing switch A derailing switch (Fig. 27.10) consists of a half-switch, i.e., only a tongue rail, which in its open position faces away from the stock rail, leaving a gap in between, and this causes a discontinuity in the track. A vehicle cannot go beyond this point and gets automatically derailed if it does manage to do so. The switch can be closed with the help of a lever and a vehicle can then traverse it normally. This is also called a trap switch.

A sand hump consists of a mound of sand of a specified cross section that covers the track under the end of a dead end siding, which is laid on a rising gradient. A moving vehicle comes to a stop because of the combined resistance of the sand hump and the rising gradient.

A fouling mark (Fig. 27.12) is provided between two converging tracks at the point beyond which the centre-to-centre distance of the track is less than the stipulated minimum distance. This minimum distance is 4.265 m for BG and 3.66 m for MG lines. A vehicle standing on a loop line is not stabled beyond the fouling mark, otherwise it may have a side collision with the vehicle standing on the main line. The salient features of a fouling mark are as follows. 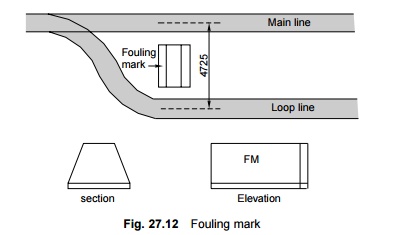 (a)  A fouling mark consists of a stone or concrete block or an old wooden or steel sleeper painted white.

(b) The fouling mark should be visible from a distance. Therefore, it is painted white and has the letters FM marked on it in bold using black paint.

(d) The fouling mark should be fixed firmly on the ground at right angles to the track.