Consider the equation Q = kP where Q, P Î EP(a, b) and k < p. It is rela- tively easy to calculate Q given k and P, but it is relatively hard to determine k given Q and P. This is called the discrete logarithm problem for elliptic curves.

We give an example taken from the Certicom Web site(www.certicom.com).

In the remainder of this section, we show two approaches to ECC that give the flavor of this technique.

Key exchange using elliptic curves can be done in the following manner. First pick a large integer q, which is either a prime number p or an integer of the form 2m, and elliptic curve parameters a and b for Equation (10.5) or Equation (10.7). This defines the elliptic group of points Eq(a, b). Next, pick a base point G = (x1, y1) in Ep(a, b) whose order is a very large value n. The order n of a point G on an elliptic curve is the smallest positive integer n such that nG = 0 and G are parameters of the cryptosystem known to all participants.

A key exchange between users A and B can be accomplished as follows (Figure 10.7).

The two calculations in step 3 produce the same result because

To break this scheme, an attacker would need to be able to compute k given G

and kG, which is assumed to be hard.

Note that the secret key is a pair of numbers. If this key is to be used as     a session key for conventional encryption, then a single number must be gener- ated. We could simply use the x coordinates or some simple function of the x coordinate. 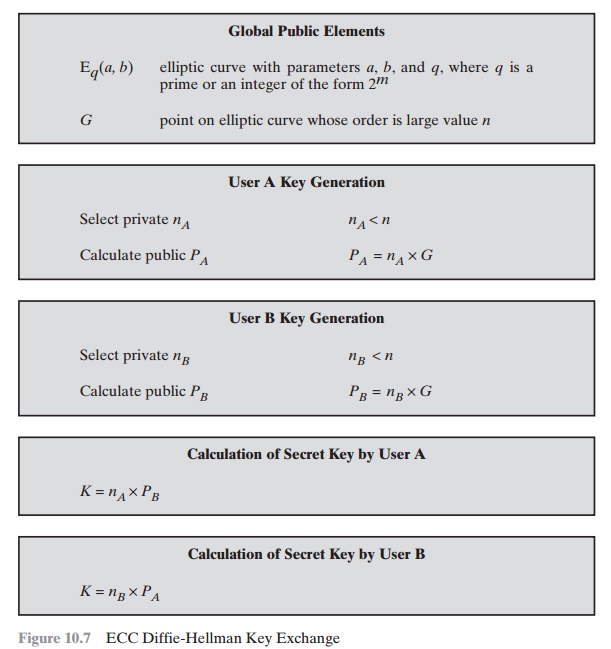 Several approaches to encryption/decryption using elliptic curves have been ana- lyzed in the literature. In this subsection, we look at perhaps the simplest. The first task in this system is to encode the plaintext message m to be sent as an x–y point Pm. It is the point Pm that will be encrypted as a ciphertext and subsequently decrypted. Note that we cannot simply encode the message as the x or y coordinate of a point, because not all such coordinates are in Eq(a, b); for example, see Table

Again, there are several approaches to this encoding, which we will    not

address here, but suffice it to say that there are relatively straightforward tech- niques that can be used.

As with the key exchange system, an encryption/decryption system requires a point G and an elliptic group Eq(a, b) as parameters. Each user A selects a private key nA and generates a public key PA  =  nA  * G.

To encrypt and send a message Pm to B, A chooses a random positive integer k

and produces the ciphertext Cm consisting of the pair of points:

Note that A has used B’s public key PB. To decrypt the ciphertext, B multiplies the first point in the pair by B’s secret key and subtracts the result from the second point:

A has masked the message Pm by adding kPB to it. Nobody but A knows the value of k, so even though Pb is a public key, nobody can remove the mask kPB. However, A also includes a “clue,” which is enough to remove the mask if one knows the private key nB. For an attacker to recover the message, the attacker would have to compute k given G and kG, which is assumed to be hard.

The security of ECC depends on how difficult it is to determine k given kP and P. This is referred to as the elliptic curve logarithm problem. The fastest known tech- nique for taking the elliptic curve logarithm is known as the Pollard rho method. Table 10.3 compares various algorithms by showing comparable key sizes in terms of computational effort for cryptanalysis. As can be seen, a considerably smaller key size can be used for ECC compared to RSA. Furthermore, for equal key lengths, the computational effort required for ECC and RSA is comparable [JURI97]. Thus, there is a computational advantage to using ECC with a shorter key length than a comparably secure RSA.