The principal attraction of ECC, compared to RSA, is that it appears to offer equal security for a far smaller key size, thereby reducing processing overhead.

Most of the products and standards that use public-key cryptography for encryp- tion and digital signatures use RSA. As we have seen, the key length for secure RSA use has increased over recent years, and this has put a heavier processing load on applications using RSA. This burden has ramifications, especially for electronic commerce sites that conduct large numbers of secure transactions. A   competing system challenges RSA: elliptic curve cryptography (ECC). ECC is showing up in standardization efforts, including the IEEE P1363 Standard for Public-Key Cryptography.

The principal attraction of ECC, compared to RSA, is that it appears to offer equal security for a far smaller key size, thereby reducing processing overhead. On the other hand, although the theory of ECC has been around for some time, it is only recently that products have begun to appear and that there has been sustained cryptanalytic interest in probing for weaknesses. Accordingly, the confidence level in ECC is not yet as high as that in RSA.

The reader may wish to review the material on finite fields in Chapter 4 before proceeding.

A number of public-key ciphers are based on the use of an abelian group. For example, Diffie-Hellman key exchange involves multiplying pairs of nonzero inte- gers modulo a prime number q. Keys are generated by exponentiation over the group, with exponentiation defined as  repeated multiplication. For  example,

determine k given a and ak; this is the discrete logarithm problem.

For elliptic curve cryptography, an operation over elliptic curves, called addi- tion, is used. Multiplication is defined by repeated addition. For example,

where the addition is performed over an elliptic curve. Cryptanalysis involves determining k given a and (a * k).

Elliptic curves are not ellipses. They are so named because they are described by cubic equations, similar to those used for calculating the circumference of an ellipse. In general, cubic equations for elliptic curves take the following form, known as a Weierstrass equation:

where a, b, c, d, e are real numbers and x and y take on values in the real numbers.4 For our purpose, it is sufficient to limit ourselves to equations of the form

Such equations are said to be cubic, or of degree 3, because the highest expo- nent they contain is a 3. Also included in the definition of an elliptic curve is a single element denoted O and called the point at infinity or the zero point, which we discuss subsequently. To plot such a curve, we need to compute

For given values of a and b, the plot consists of positive and negative values of y for each value of x. Thus, each curve is symmetric about y = 0. Figure 10.4 shows two examples of elliptic curves. As you can see, the formula sometimes produces weird- looking curves.

GEOMETRIC DESCRIPTION OF ADDITION It can be shown that a group can be defined based on the set E(a, b) for specific values of a and b in Equation (10.1), provided  the following condition is met: 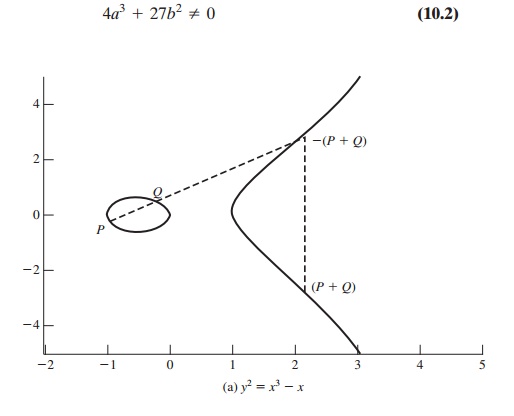 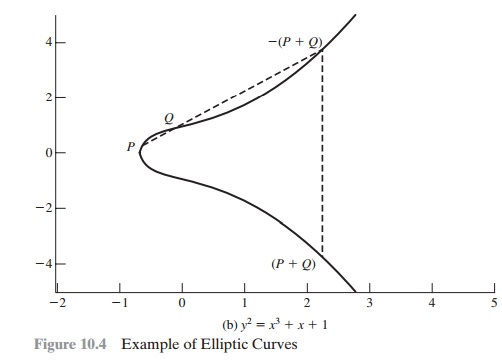 To define the group, we must define an operation, called addition and denoted by +, for the set E(a, b), where a and b satisfy Equation (10.2). In geometric terms, the rules for addition can be stated as follows: If three points on an elliptic curve lie on a straight line, their sum is O. From this definition, we can define the rules of addi- tion over an elliptic curve.

2.         The geometric interpretation of the preceding item also applies to two points, P and -P, with the same x coordinate. The points are joined by a vertical line, which can be viewed as also intersecting the curve at the infinity point. We there- fore have P + (-P) = O, which is consistent with item (2).

With the preceding list of rules, it can be shown that the set E(a, b) is an abelian group.

ALGEBRAIC DESCRIPTION OF ADDITION In this subsection, we present some results that enable calculation of additions over elliptic curves.5 For two distinct points,  P = (xP , yP) and Q = (xQ, yQ), that are not negatives of each other, the slope of the line l that joins them is Δ = (yQ - yP)>(xQ - xP) . There is exactly one other point where l intersects the elliptic curve, and that is the negative of the sum of P and Q.

After some algebraic manipulation, we can express the sum R = P + Q as

curves over GF(2m). For a prime curve over Zp, we use a cubic equation in which the

p - 1 and in which calculations are performed modulo p. For a binary curve defined over GF(2m), the variables and coefficients all take on values in GF(2m) and in cal- culations are performed over GF(2m). [FERN99] points out that prime curves are best for software applications, because the extended bit-fiddling operations needed by binary curves are not required; and that binary curves are best for hardware applications, where it takes remarkably few logic gates to create a powerful, fast cryptosystem. We examine these two families in this section and the next.

For elliptic curves over Zp, as with real numbers, we limit ourselves to equa- tions of the form of Equation (10.1), but in this case with coefficients and variables limited to Zp:

Now consider the set Ep(a, b) consisting of all pairs of integers (x, y) that sat- isfy Equation (10.5), together with a point at infinity O. The coefficients a and b and the variables x and y are all elements of   Zp. 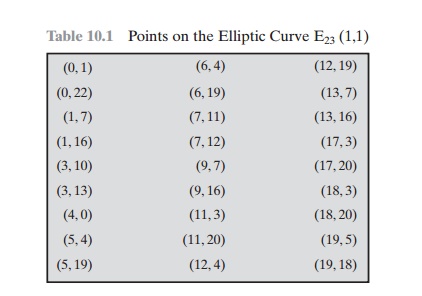 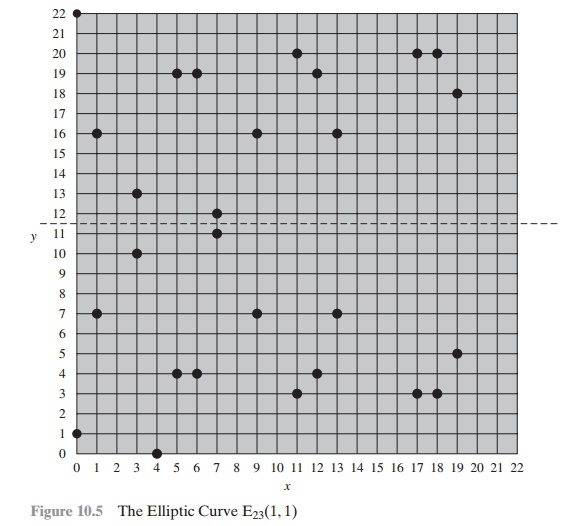 It can be shown that a finite abelian group can be defined based on the set Ep(a, b) provided that (x3 + ax + b) mod p has no repeated factors. This is equiva- lent to the condition

The rules for addition over Ep(a, b), correspond to the algebraic technique described for elliptic curves defined over real numbers. For all points P, Q Î Ep(a, b): 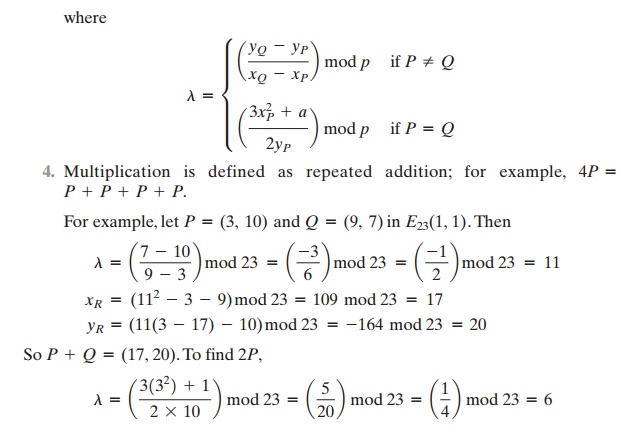 Recall from Chapter 4 that a finite field GF(2m) consists of 2m elements, together with addition and multiplication operations that can be defined over polynomials. For elliptic curves over GF(2m), we use a cubic equation in which the variables and coefficients all take on values in GF(2m) for some number m and in which calcula- tions are performed using the rules of arithmetic in GF(2m).

It turns out that the form of cubic equation appropriate for cryptographic appli- cations for elliptic curves is somewhat different for GF(2m) than for Zp. The form is 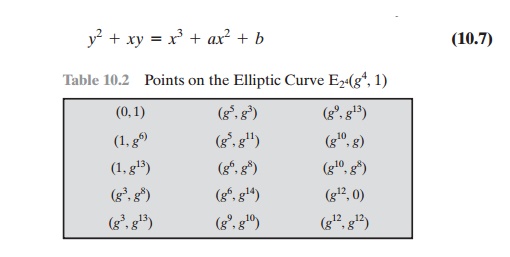 where it is understood that the variables x and y and the coefficients a and b are elements of GF(2m) and that calculations are performed in GF(2m).

Now consider the set E2m(a, b) consisting of all pairs of integers (x, y)  that satisfy Equation (10.7), together with a point at infinity O.

It can be shown that a finite abelian group can be defined based on the set E2m(a, b), provided that b  !=  0. The rules for addition can be stated as follows. For all points P, Q Î E2m(a, b): 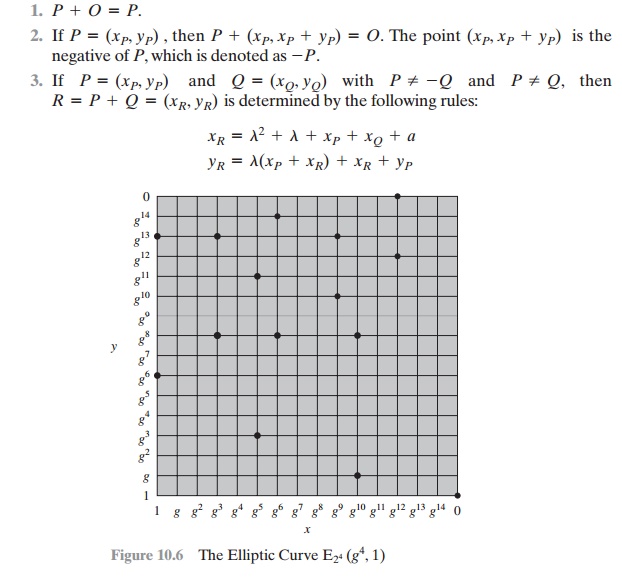