The phenomenon of Faraday's electromagnetic induction concludes that a changing magnetic field at a point with time produces an electric field at that point.

According to Maxwell, an accelerated charge is a source of electromagnetic radiation. 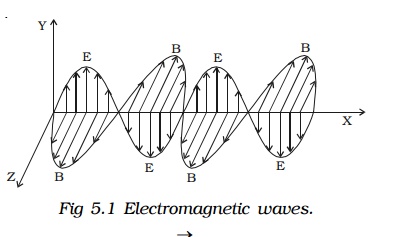 (i) Electromagnetic waves are produced by accelerated charges.

(ii) They do not require any material medium for propagation.

(iv) Variation of maxima and minima in both Vector(E) and Vector(B) occur simultaneously.

(vi) The energy in an electromagnetic wave is equally divided between electric and magnetic field vectors.

(vii) The electromagnetic waves being chargeless, are not deflected by electric and magnetic fields. 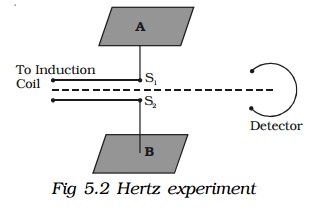 The experimental arrangement is as shown in Fig 5.2. It consists of two metal plates A and B placed at a distance of 60 cm from each other. The metal plates are connected to two polished metal spheres S1 and S2 by means of thick copper wires. Using an induction coil a high potential difference is applied across the small gap between the spheres.

Here the plates A and B act as a capacitor having small capacitance value C and the connecting wires provide low inductance L. The high frequency oscillation of charges between the plates is given by 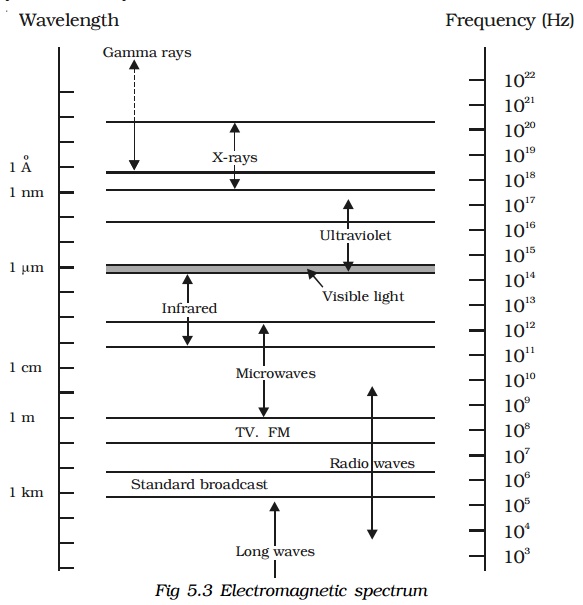 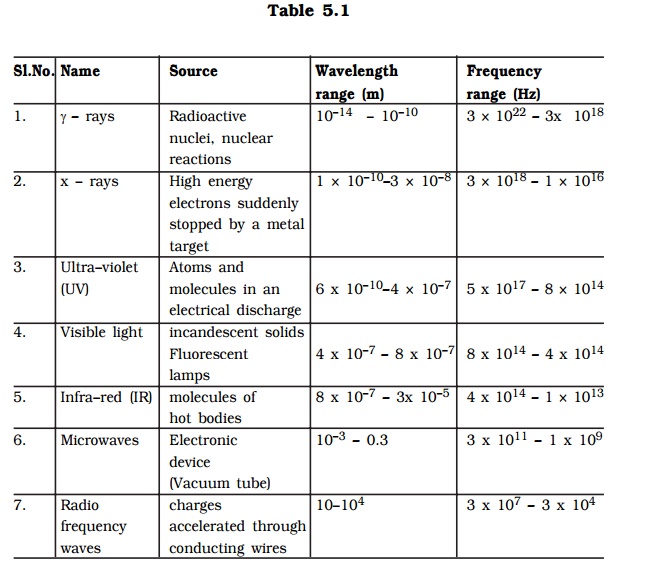 The following are some of the uses of electromagnetic waves.

1. Radio waves : These waves are used in radio and television communication systems. AM band is from 530 kHz to 1710 kHz. Higher frequencies upto 54 MHz are used for short waves bands.

2. Microwaves : Due to their short wavelengths, they are used in radar communication system. Microwave ovens are an interesting domestic application of these waves.

i.    Infrared lamps are used in physiotherapy.

iii.        As infrared radiations are not absorbed by air, thick fog, mist etc, they are used to take photograph of long distance objects.

4. Visible light : Visible light emitted or reflected from objects around us provides information about the world. The wavelength range of visible light is 4000 Å to 8000 Å.

i.They are used to destroy the bacteria and for sterilizing surgical instruments.

ii. These radiations are used in detection of forged documents, finger prints in forensic laboratories.

iii.  They are used to preserve the food items.

iv.  They help to find the structure of atoms.

(i) X rays are used as a diagonistic tool in medicine.

(ii) It is used to study the crystal structure in solids.

7. γ−rays : Study of γ rays gives useful information about the nuclear structure and it is used for treatment of cancer.