EEG is the recorded re presentation of bioelectric potentials generated by the neuronal activity of the brain.

·        EEG is the recorded re presentation of bioelectric potentials generated by the neuronal activity of the brain.

·        Basically, the brain is a gelatinous mass suspend in the meanings, the cerebrospinal fluid, skull and scalp.

·        The brain is composed of three major subdivisions:

The cerebellum is mainly involved with skeletal muscle functions and maintenance of balance. It coordinates smooth and directed movements.

·        The brain stemis the stalk of the brain and serves as a relay station for all afferent (sensory) and efferent (motor) nerve fibers between the spinal cord and higher brain canters. It also gives rise to ten of the twelve cranial nerves, which supply the muscles and glands of the head and major organs in the thoracic and abdominal cavities

·        Throughout the entire brainstem runs a core of tissue called the reticular formation, which serves as a highly complex cluster of neurons involved in integration of information from many afferent pathways as well as from numerous other parts of the brain.

·        The cerebrum consists of the right and left hemispheres. The outer part of the cerebral hemispheres, the cerebral cortex, is a cellular shell 1.5 – 4 mm thick of grey matter.

·        The cerebral cortex is highly convoluted and is the most complex integrating center of the nervous system. It brings together basic sensory information into meaningful perceptual images and formulates ultimate decisions for control over the motor systems of the body.

·        The cerebral cortex is comprised of two layers: the pale cortex and the neocortex.

·        The pale cortex is located on the median surface and the base of the brain and the neocortex is present on the superior and lateral aspects of the cerebral hemispheres.

·        The neocortex is composed of six layers and its cells can be categorized as pyramidal and non-pyramidal cells. There are approximately 1010 neurons in the human cerebral cortex, about 75% of, which is pyramidal.

·        Pyramidal cells, named originally after their shape, have several characteristics. Their cell bodies are commonly triangular in shape, with the base down and the apex directed toward the cortical (superficial) surface.

·        The cell bodies vary in size, from axial dimensions of 15 x 10 μm up to 120 x 90 μm. A typical pyramidal cell consists of a long apical dendrite, about 2 mm long, that ascends from the apex of the cell body and enters the overlaying layers and terminally branches within the outermost layer of the neocortex.

·        There is a dominant apical dendrites tree, looking like a forest of similarly oriented, densely packed units in the superficial layers of the neocortex, where extensive branching occurs. 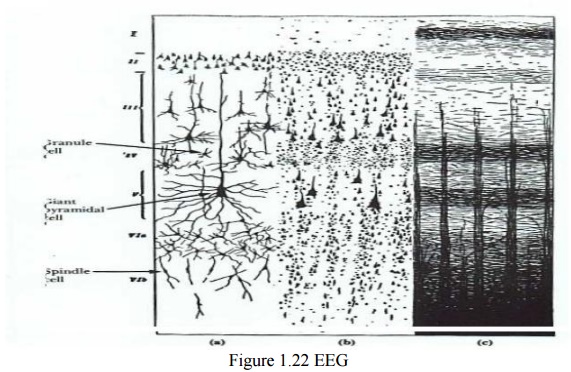 ·        There is also a basilar dendritic system that extends out spherically from the cell body.

·        Pyramidal cells also have an axon that emerges from the cell body and enters the sub cortical white matter.

·        Axons of some pyramidal cells turn back toward the cortical surface to end via their many dendritic branches on the dendrites of other cells.

·        It has been shown by electrophysiological studies that under normal circumstances, propagating action potentials in axons do not contribute significantly to surface cortical recordings.

·        There reason being that action potentials travel in large number of axons (running in many different directions relative to the surface) in a temporally a synchronized way. Therefore, their net contribution to the surface EEG is minimal and negligible.

·        It has been shown that the vertically oriented pyramidal cells with their long apical dendrites running parallel to one another are the major contributors to the electro genesis of the cortical field potentials (EEG signal). 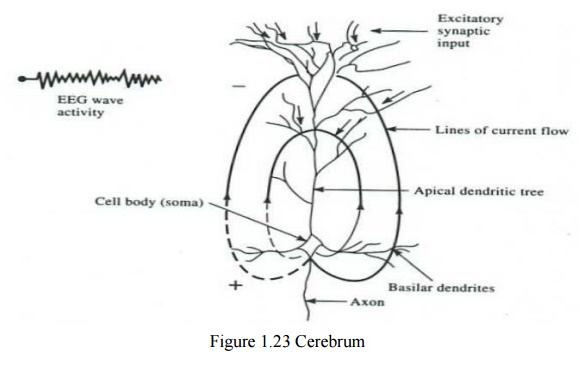 A highly schematic representation of a pyramidal cell and its role in the generation of surface EEG signal. Let’s consider a single pyramidal cell, and explain how potential changes in one part of the cell relative to other parts could generate the EEG signal.

·        Excitatory synaptic inputs to the branches in the apical dendritic tree of the pyramidal cells cause depolarization of the dendritic membrane.

·        This leads into generation of an excitatory postsynaptic potential (EPSP)

·        As a result, a radially oriented dipole is set up and sub threshold current flows in a closed path through the cytoplasmic core of the dendrites and cell body of the cell, returning to the synaptic sites via the conducting extracellular medium

·        The lines of current flow make the extracellular medium close to the cell body act as a source with + polarity and the upper part of the apical dendritic tree to act as a sink with – polarity.

·        This leads into recording a negative potential at the cortical surface

In case of inhibitory synaptic inputs to the branches in the apical dendritic tree, an inhibitory postsynaptic potential (IPSP) is generated with a reversal in the polarity of the current dipole, which leads into a generation of a positive cortical recording.

·        Therefore, the influence of a particular dendritic postsynaptic potential on the cortical recording depends on its net excitatory or inhibitory effect and on its location relative to the measurement site.

The EEG (electroencephalogram) signal is a recording of the electrical activity of the brain. The EEG signal recorded at the cortex or the scalp is generated by the polled activity of billions of cortical and sub cortical regions. The origin of the EEG signal is based on the electrical activity of the pyramidal cells. The EEG potentials primarily reflect the summated fluctuations of excitatory and inhibitory postsynaptic potentials in the pyramidal cells of the upper layers of the cerebral cortex. For reasons of geometry as well as because of extreme extracellular attenuation, action potentials from firings of pyramidal cells contribute only minimally or not all to the generation of the EEG signal.

·        All we need to contend ourselves with at this stages that the EEG or brain waves are summation of neural depolarization sin the brain due to the stimuli from the five senses as well as from thought processes (indeed a very complex source). More on this in physiology in the Nervous System topic.

·        EEG potentials have random-appearing waveforms with peak-to-peak amplitudes ranging from less than 10 mV to over 100mV. Required bandwidth is from below 1 Hz to over 100 Hz.

EEG is recorded with 3 types of electrodes:

·        No matter where the recording is obtained from (scalp, cortex or depth of the brain), the fluctuating potentials represent a superposition of the volume conductor fields produced by a huge variety of active neuronal current-generators.

·        On the surface of the brain (i.e. Electrocardiogram), we can record voltages on the order of 10 mV! But, typical EEG electrodes measure the electrical activity propagated through skull bone and is attenuated from 1 to 100 μV.

·        EEG potentials vary as a function of position over the surface of the skull, making it necessary to select sets of electrodes grouped around Frontal, Parietal, Temporal and Occipital lobes.

·        The character of the EEG signal is highly dependent on the degree of the activity of the cerebral cortex, i.e. waves change markedly between states of wakefulness and sleep.

·        Much of the time, EEGs are irregular and no general pattern can be observed. Other times, distinct patterns emerge

Note: During periods of mental activity, the waves usually become asynchronous rather than synchronous, so the magnitude of summed potentials decreases in spite of cortical activity. 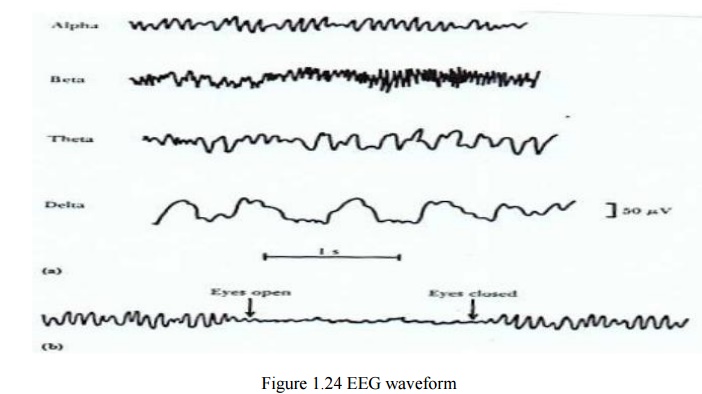 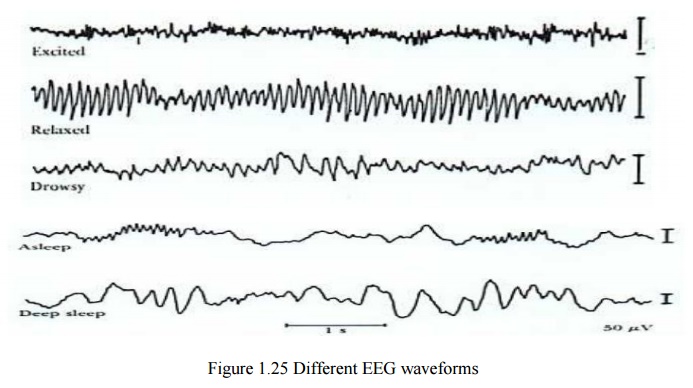 The EEG changes that occur as a human subject goes to sleep.

The purpose of the clinical EEG is to help neurologists diagnose disease. The pathological states most commonly diagnosed using EEG are:

·        Evoked responses (diseases of the audio, visual and tactile senses)

·        A sustained absence of EEG signal is a clinical measure of brain death and can be used in deciding whether to transplant a heart, liver, or lung or whether to shut down the life sustaining equipment

Petit mal epilepsy– Minor for of seizure, clouding of consciousness and loss of contact with the environment

Grand mal epilepsy– Sudden loss of consciousness, falling down, tonic contractions (stiffening of muscles) followed by twitching and jerking movements of the limbs 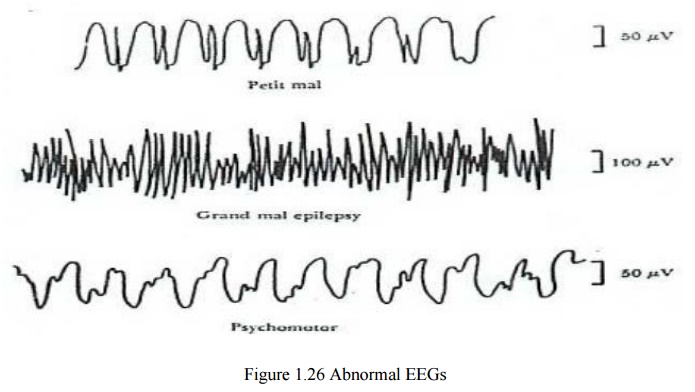 ·        In electroencephalography, the electrodes are placed in an arrangement referred to as the 10-20 system

·        The electrodes are placed along a line drawn on the skull from the root of the nose, the nasion, to the classification (bump on the occipital lobe) 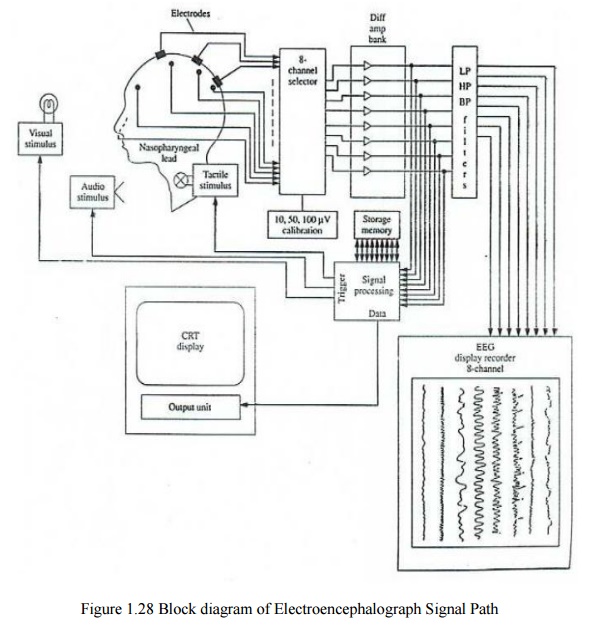 ·        It shows the modern 8 channel EEG recorder. The patient cable consists of 21 electrodes and is connected to the 8 channel selector.

·        The electrodes are attached to the channel selector in groups of 8 called a montage of electrodes.

·        The 50 Hz interference is reduced by employing differential amplifiers as preamplifiers with more than 80 dB CMRR and by use of 50 Hz notch filters.

·        The effect of notch filter on signal distortion is not so much because important EEG signals have frequencies below 30 Hz.

·        The output voltage from the amplifier may either be applied directly to the eight channel display through the filter bank or it may be stored as data on a tape recorder or in a computer memory for further processing.