It is an instrument used for recording the electrical activity of the muscles to determine whether the muscle is contracting or not.

It is an instrument used for recording the electrical activity of the muscles to determine whether the muscle is contracting or not. Study of neuromuscular function is also possible by using EMG. Muscular contractions are caused by the depolarization of muscle fibers. Similarly the recording of peripheral nerves action potentials is called as electro neurography.

Needle electrodes – These are inserted into tissue or closer to tissue to measure the electrical activity of muscle.

Bandwidth of EMG is large. CMRR (Common mode Rejection Ratio) of this differential amplifier is 80 to 100 db.Input Impedance of this amplifier is 10 MΩ. Here there is no lead

selector switch. Because only two electrodes are available. The output of the differential amplifier is given to loudspeaker system, tape recorder and CRO.

In modern EMG systems, nerve conduction time and nerve velocity are measured. For this measurement, initially nerve is stimulated and EMG is measured.This conduction velocity measurement is used to indicate the location and type of nerve lesion.

·        Electrical activity of muscle is measured at point B

·        The time delay between applying stimulus and receiving action potential is known as latency. This time delay is detoned as t1 second.

·        Skeletal muscle is organized functionally on the basis of the motor unit. 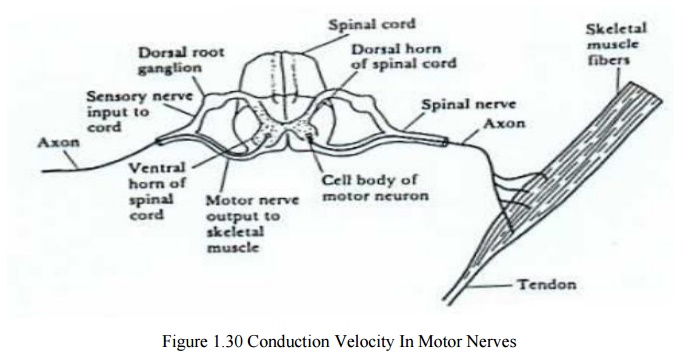 ·        SMU is a distributed unit bioelectric source in a volume conductor consisting of all other muscle fibers, both active and inactive.

·        The figure below shows motor unit potentials from normal muscle under graded levels of contraction. At high levels of activity, many sophisticated motor unit responses give rise to a complicated response (interference pattern)

·        A variety of electrodes have been developed for EMG recording

·        The EMG is also of considerable clinical value

·        The shape of SMU potentials is modified by disease 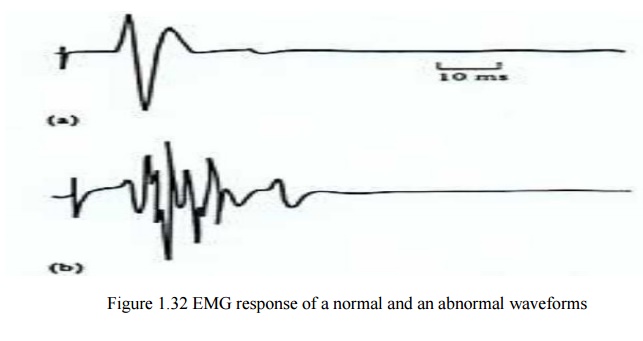 EMG is used in the field of: