If electrode has same material as cation, then this material gets oxidized and enters the electrolyte as a cation a nd electrons remain at the electrode and flow in the external circuit.

•        If electrode has same material as cation, then this material gets oxidized and enters the electrolyte as a cation a nd electrons remain at the electrode and flow in the external circuit.

•        If anion can be oxidized at the electrode to form a neutral atom, one or two electrons are given to the electrode

The dominating reaction can be inferred from the following : 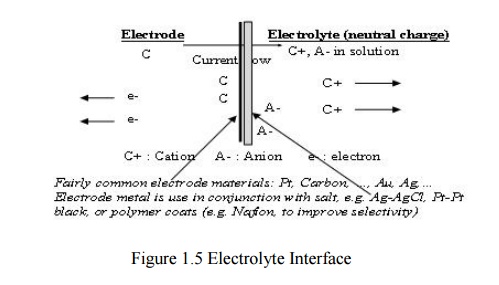 ·        A characteristic potential difference established by the electrode and its surrounding electrolyte which depends on the metal, concentration of ions in solution and temperature.

Half cell potential cannot be measured without a second electrode.

Reason for Half Cell Potential : Charge Separation at Interface

·        Oxidation or reduction reactions at the electrode-electrolyte interface lead to a double-charge layer, similar t o that which exists along electrically active biological cell membranes.

·   If there is a current between the electrode and electrolyte, the observed half cell potential is often altered due to polarization.

·        When two aqueous ionic solutions of different concentration are separated by an ion-selective semi-permeable membrane, an electric potential exists across the membrane.

Perfectly Polarizable Electrodes: These are electrodes in which no actual charge crosses the electrode-electrolyte interface when a current is applied. The current across the interface is a displacement current and the electrode behaves like a capacitor. Example : Ag/AgCl Electrode

Perfectly Non-Polarizable Electrode: These are electrodes where current passes freely across the electrode-electrolyte interface, requiring no energy to make the transition.

Example: Ag-AgCl is used in recording while Pt is use in stimulation

·        When the electrode moves with respect to the electrolyte, the distribution of the double layer of charge on polarizable electrode interface changes. This changes the half cell potential temporarily.

·        If a pair of electrodes is in an electrolyte and one moves with respect to the other, a potential difference appears across the electrodes known as the motion artifact. This is a source of noise and interference in biopotential measurements.Motion artifact is minimal for non-polarizable electrodes 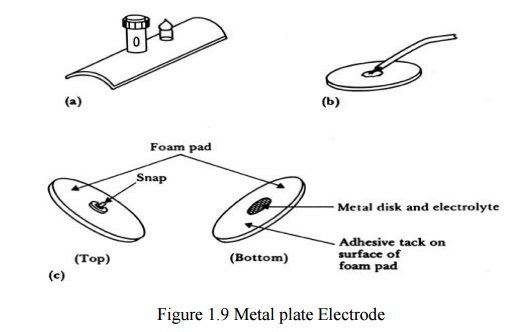 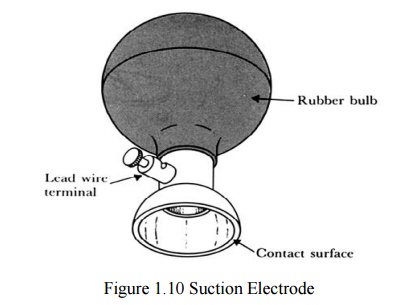 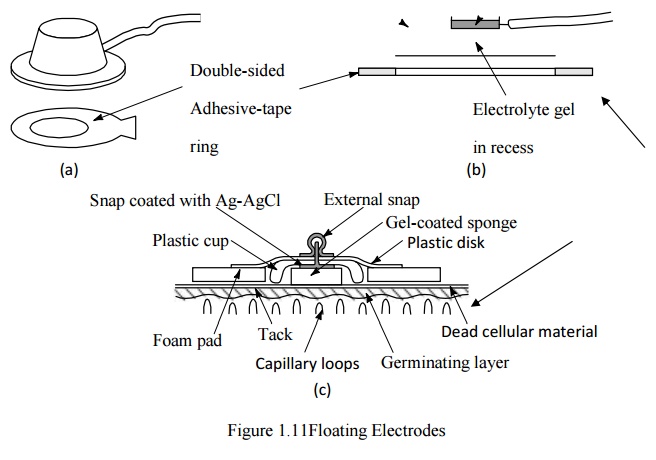 -  Polymer or nylon with silver 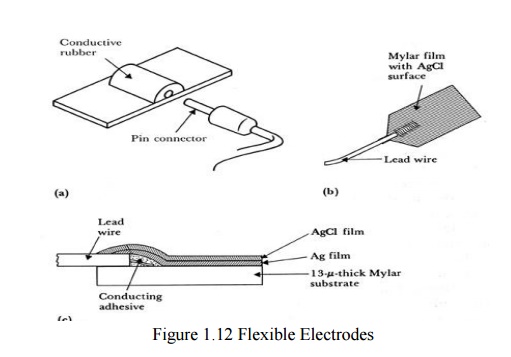 (c) Cross-sectional view of the thin-film electrode in (b).

•           circumvent patents that are based on plastic/foam electrode body

•           attractive to consumers for use with their ECG machines at home

•           reduce artifact (minimize the motion of skin/electrode) in ambulatory recording

In a research laboratory, scientists want to record from single cells in a culture dish. They want to record action potentials from single, isolated heart cells. What kind of electrode would they need to use (describe material and design)? Give a simplified schematic (circuit model of the electrode) described in the notes given to you.

It is used to measure potential within asingla cell.It is small in diameter and during insertion of microelectrode into cell will not damage to human cell.

·        It is formed by electrolytically etching the tip of fine tungsten filament stainless wire into a minute structure.

·        Potential within the cell can be measured by using two electrodes

·        It is used to measure the potential within the single cell using non metallic material is used.

·        It is filled within an electrolyte ,that is compatible with the cellular fluids.