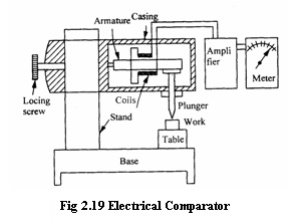 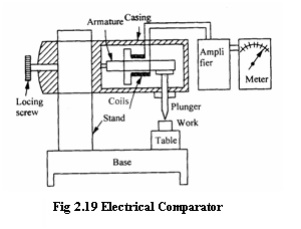 An iron armature is provided in between two coils held by a lea spring at one end. The other end is supported against a plunger. The two coils act as two arms of an A.C. wheat stone bridge circuit.

The amplified input signal is displayed on some terminal stage instruments. Here, the terminal instrument is a meter.

If the armature is centrally located between the coils, the inductance of both coils will be equal but in opposite direction with the sign change. Due to this, the bridge circuit of A.C. wheat stone bridge is balanced. Therefore, the meter will read zero value. But practically, it is not possible. In real cases, the armature may be lifted up or lowered down by the plunger during the measurement. This would upset the balance of the wheat stone bridge circuit. Due to this effect, the change in current or potential will be induced correspondingly. On that time, the meter will indicate some value as displacement. This indicated value may be either for larger or smaller components. As this induced current is too small, it should be suitably amplified before being displayed in the meter.

To check the accuracy of a given specimen or work, first a standard specimen is placed under the plunger. After this, the resistance of wheat stone bridge is adjusted so that the scale reading shows zero. Then the specimen is removed. Now, the work is introduced under the plunger. If height variation of work presents, it will move the plunger up or down. The corresponding movement of the plunger is first amplified by the amplifier then it is transmitted to the meter to show the variations. The least count of this electrical comparator is 0.001mm (one micron).