It was pointed out that the blood pressure in the foot of a standing person can be as much as 90 mm Hg greater than the pressure at the level of the heart.

It was pointed out that the blood pressure in the foot of a standing person can be as much as 90 mm Hg greater than the pressure at the level of the heart. This is caused by hydrostatic pressure—that is, by the weight of the blood itself in the blood vessels. The same effect, but to a lesser degree, occurs in the lungs. In the normal, upright adult, the lowest point in the lungs is about 30 centimeters below the highest point. This represents a 23 mm Hg pressure difference, about 15 mm Hg of which is above the heart and 8 below. That is, the pulmonary arterial pressure in the uppermost portion of the lung of a standing person is about 15 mm Hg less than the pulmonary arterial pressure at the level of the heart, and the pressure in the lowest portion of the lungs is about 8 mm Hg greater. Such pressure dif-ferences have profound effects on blood flow through the different areas of the lungs. This is demonstrated by the lower curve in Figure 38–3, which depicts blood flow per unit of lung tissue at different levels of the lung in the upright person. Note that in the standing position at rest, there is little flow in the top of the lung but about five times as much flow in the bottom. To help explain these differences, one often describes the lung as being divided into three zones, as shown in Figure 38–4. In each zone, the patterns of blood flow are quite different. 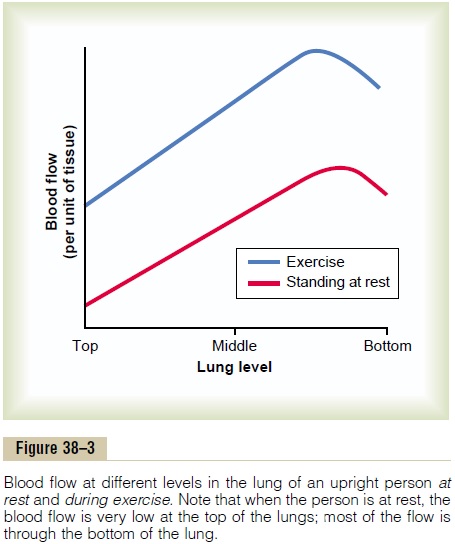 The capillaries in the alveolar walls are distended by the blood pressure inside them, but simultaneously, they are compressed by the alveolar air pressure on their out-sides. Therefore, any time the lung alveolar air pressure becomes greater than the capillary blood pressure, the capillaries close and there is no blood flow. Under different normal and pathological lung conditions, one may find any one of three possible zones of pulmonary blood flow, as follows: 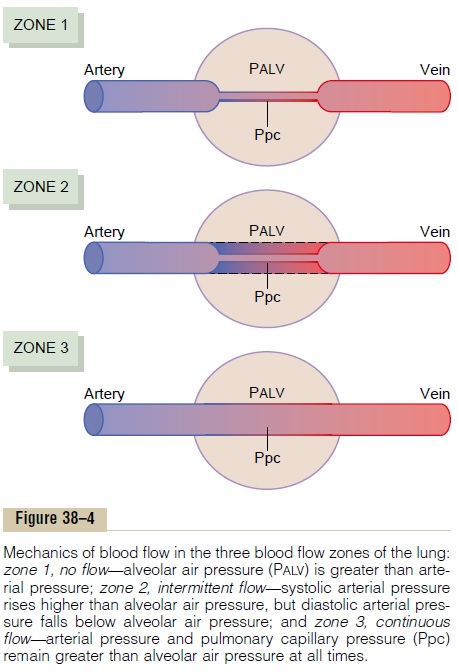 Normally, the lungs have only zones 2 and 3 blood flow—zone 2 (intermittent flow) in the apices, and zone 3 (continuous flow) in all the lower areas. For example, when a person is in the upright position, the pulmonary arterial pressure at the lung apex is about 15 mm Hg less than the pressure at the level of the heart. There-fore, the apical systolic pressure is only 10 mm Hg (25 mm Hg at heart level minus 15 mm Hg hydrostatic pressure difference). This 10 mm Hg apical blood pres-sure is greater than the zero alveolar air pressure, so that blood flows through the pulmonary apical capillaries during cardiac systole. Conversely, during diastole, the 8 mm Hg diastolic pressure at the level of the heart is not sufficient to push the blood up the 15 mm Hg hydro-static pressure gradient required to cause diastolic cap-illary flow. Therefore, blood flow through the apical part of the lung is intermittent, with flow during systole but cessation of flow during diastole; this is called zone 2 blood flow. Zone 2 blood flow begins in the normal lungs about 10 centimeters above the midlevel of the heart and extends from there to the top of the lungs.

In the lower regions of the lungs, from about 10 cen-timeters above the level of the heart all the way to the bottom of the lungs, the pulmonary arterial pressure during both systole and diastole remains greater than the zero alveolar air pressure. Therefore, there is con-tinuous flow through the alveolar capillaries, or zone 3 blood flow. Also, when a person is lying down, no part of the lung is more than a few centimeters above the level of the heart. In this case, blood flow in a normal person is entirely zone 3 blood flow, including the lung apices.

Effect of Exercise on Blood Flow Through the Different Parts of the Lungs. Referring again to Figure 38–3, one sees thatthe blood flow in all parts of the lung increases during exercise. The increase in flow in the top of the lung may be 700 to 800 per cent, whereas the increase in the lower part of the lung may be no more than 200 to 300 per cent. The reason for these differences is that the pul-monary vascular pressures rise enough during exercise to convert the lung apices from a zone 2 pattern into a zone 3 pattern of flow.

During heavy exercise, blood flow through the lungs increases fourfold to sevenfold. This extra flow is accommodated in the lungs in three ways: (1) by increasing the number of open capillaries, sometimes as much as threefold; (2) by distending all the capil-laries and increasing the rate of flow through each capillary more than twofold; and (3) by increasing the pulmonary arterial pressure. In the normal person, the first two changes decrease pulmonary vascular resist-ance so much that the pulmonary arterial pressure rises very little, even during maximum exercise; this effect is shown in Figure 38–5. 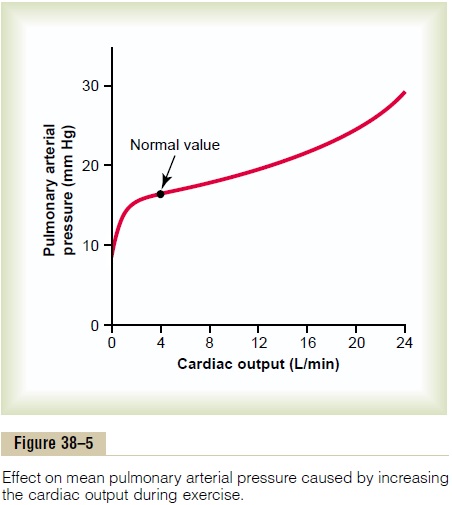 The ability of the lungs to accommodate greatly increased blood flow during exercise without increas-ing the pulmonary arterial pressure conserves the energy of the right side of the heart. This ability also prevents a significant rise in pulmonary capillary pres-sure, thus also preventing the development of pul-monary edema.

The left atrial pressure in a healthy person almost never rises above +6 mm Hg, even during the most strenuous exercise. These small changes in left atrial pressure have virtually no effect on pulmonary circu-latory function because this merely expands the pul-monary venules and opens up more capillaries so that blood continues to flow with almost equal ease from the pulmonary arteries.