Effect of Anesthesia on Hepatic Function

Hepatic blood flow usually decreases during regional and general anesthesia, and multiple factors are responsible, including both direct and indirect effects of anesthetic agents, the type of ventilation employed, and the type of surgery being performed.

EFFECT OF ANESTHESIA ON HEPATIC FUNCTION

Hepatic blood flow usually decreases during regional and general anesthesia, and multiple factors are responsible, including both direct and indirect effects of anesthetic agents, the type of ventilation employed, and the type of surgery being performed.

Decreases in cardiac output reduce hepatic blood flow via reflex sympathetic activation, which vasoconstricts both the arterial and the venous splanchnic vasculature.

Surgical procedures near the liver can reduce hepatic blood flow up to 60%. Although the mecha-nisms are not clear, they most likely involve sympa-thetic activation, local reflexes, and direct compression of vessels in the portal and hepatic circulations.

The effects of the various anesthetic agents on inter-mediary hepatic metabolism involving carbohy-drate, fat, and protein are poorly defined. An endocrine stress response secondary to fasting andsurgical trauma is generally observed. The neuroendocrine stress response to surgery andtrauma is characterized by elevated circulating levels of catecholamines, glucagon, and cortisol and results in the mobilization of carbohydrate stores and pro-tein, causing hyperglycemia and negative nitrogen balance (catabolism). The neuroendocrine stress response may be at least partially blunted by regional anesthesia, deep general anesthesia and/or pharma-cological blockade of the sympathetic system, with regional anesthesia having the most salutary effecton catabolism. All opioids can potentially cause spasm of the sphincter of Oddi andincrease biliary pressure. Naloxone and glucagon may relieve opioid-induced spasm.

Procedures in close proximity to the liver frequently result in modest elevations in lactate dehy-drogenase and transaminase concentrations regard-less of the anesthetic agent or technique employed.When the results of liver function tests are ele-vated postoperatively, the usual cause is under-lying liver disease or the surgical procedure itself. Persistent abnormalities in liver tests may be indica-tive of viral hepatitis (usually transfusion related), sepsis, idiosyncratic drug reactions, or surgical com-plications. Postoperative jaundice can result from a variety of factors (Table 32–6), but the most com-mon cause is overproduction of bilirubin because of resorption of a large hematoma or red cell breakdown following transfusion. Nonetheless, all 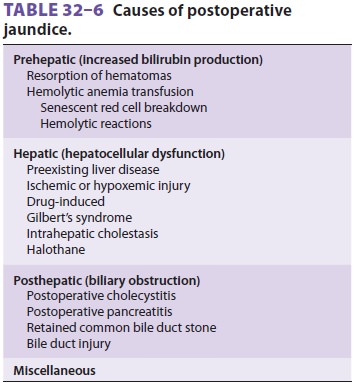 other causes should be considered. Correct diagnosis requires a careful review of preoperative liver func-tion and of intraoperative and postoperative events, such as transfusions, sustained hypotension or hypoxemia, and drug exposure. Currently utilized volatile anesthetic agents have minimal, if any, direct adverse effect upon hepatocytes.