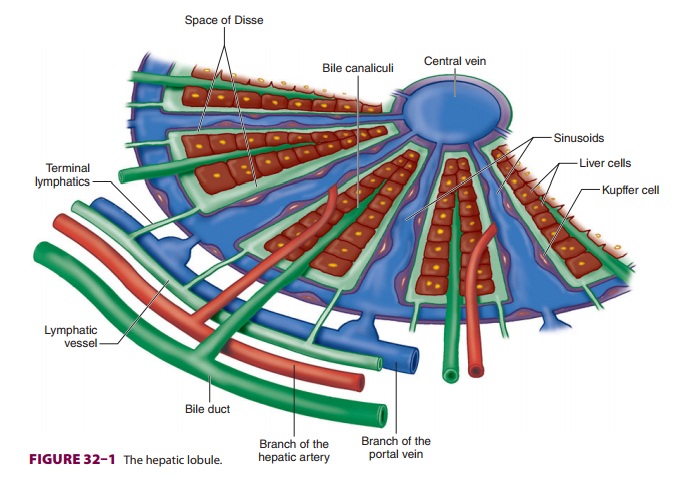 The liver is the heaviest organ in the body, weighing approximately 1500 g in adults. It is separated by the falciform ligament into right and left anatomic lobes;the larger right lobe has two additional smaller lobes at its posterior–inferior surface, the caudate and quadrate lobes.

The liver is the heaviest organ in the body, weighing approximately 1500 g in adults. It is separated by the falciform ligament into right and left anatomic lobes;the larger right lobe has two additional smaller lobes at its posterior–inferior surface, the caudate and quadrate lobes. In contrast, surgical anatomy divides the liver based on its blood supply. Thus, the right and left surgical lobes are defined by the point of bifurcation of the hepatic artery and portal vein (porta hepatis); the falciform ligament therefore divides the left surgical lobe into medial and lateral segments. Surgical anatomy defines a total of eight segments.

The liver is made up of 50,000–100,000 discrete anatomic units called lobules. Each lobule is com-posed of plates of hepatocytes arranged cylindrically around a centrilobular vein (Figure 32–1). Four to 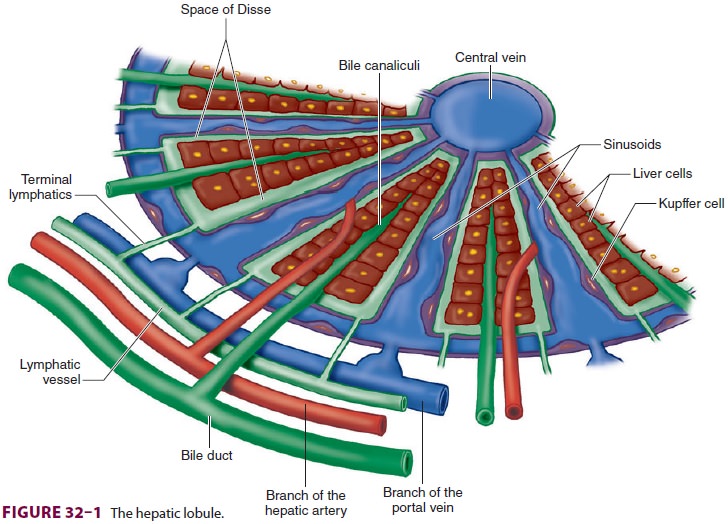 Blood from hepatic arterioles and portal venules comingle in the sinusoidal channels, which lie between the cellular plates and serve as capillar-ies. These channels are lined by endothelial cells and by macrophages known as Kupffer cells. The Kupffer cells remove bacteria endotoxins, viruses, proteins and particulate matter from the blood. The spaceof Disse lies between the sinusoidal capillaries andthe hepatocytes. Venous drainage from the central veins of hepatic lobules coalesces to form the hepatic veins (right, middle, and left), which empty into the inferior vena cava (Figure 32–2). The caudate lobe is usually drained by its own set of veins. 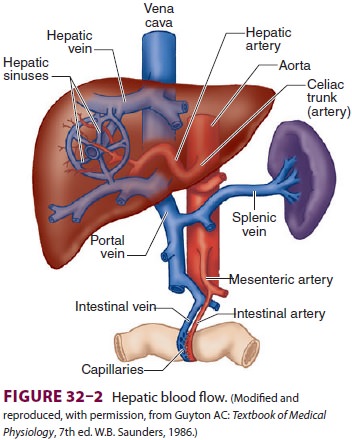 Bile canaliculi originate between hepatocytes within each plate and join to form bile ducts. An extensive system of lymphatic channels also forms within the plates and is in direct communication with the space of Disse.

The liver is supplied by sympathetic nerve fibers (T6–T11), parasympathetic fibers (right and left vagus), and fibers from the right phrenic nerve. Some autonomic fibers synapse first in the celiac plexus, whereas others reach the liver directly via splanchnic nerves and vagal branches before form-ing the hepatic plexus. The majority of sensory affer-ent fibers travel with sympathetic fibers.

Normal hepatic blood flow is 25% to 30% of the car-diac output and is provided by the hepatic artery andportal vein. The hepatic artery supplies about 45% to 50% of the liver’s oxygen requirements, and the portal vein supplies the remaining 50% to 55% (Figure 32–2). Hepatic arterial flow seems to be dependent on metabolic demand (autoregulation), whereas flow through the portal vein is dependent on blood flow to the gastrointestinal tract and the spleen. A reciprocal, though somewhat limited, mechanism exists, such that a decrease in either hepatic arterial or portal venous flow results in a compensatory increase in the other. 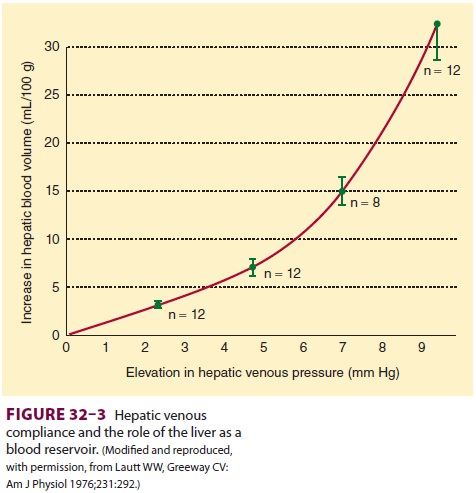 The abundance of enzymatic pathways in the liver allows it to play a key role in the metabolism of car-bohydrates, fats, proteins, and other substances (see Figure 32–4 and Table 32–1). The final products ofcarbohydrate digestion are glucose, fructose, and galactose. With the exception of the large amount of fructose that is converted by the liver to lactate, 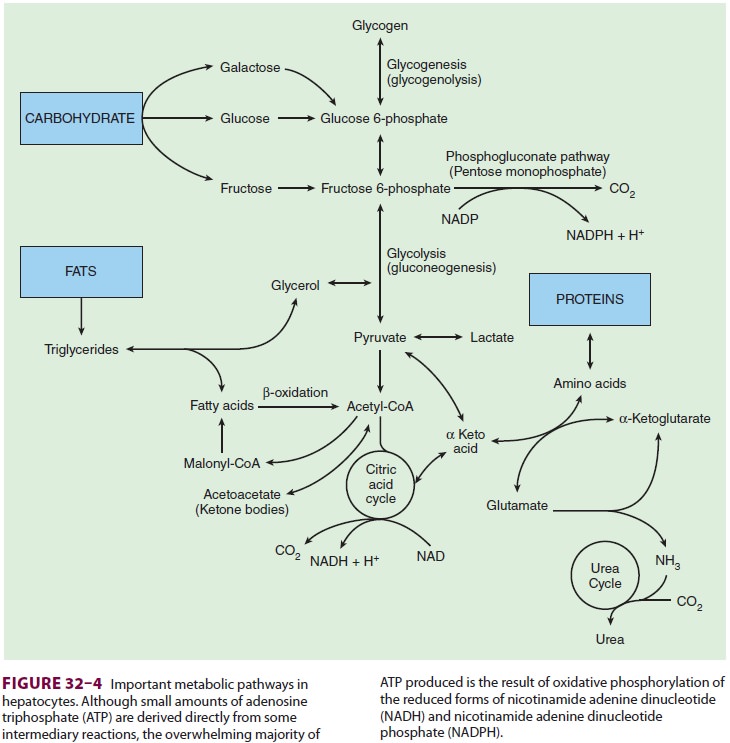 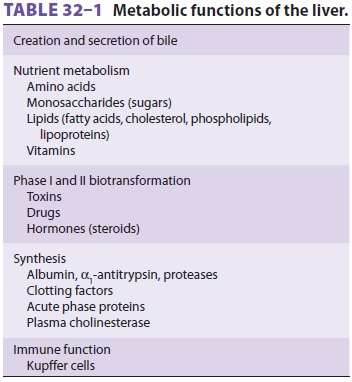 hepatic conversion of fructose and galactose into glucose makes glucose metabolism the final com-mon pathway for most carbohydrates.

All cells utilize glucose to produce energy in the form of adenosine triphosphate (ATP), either aero-bically via the citric acid cycle or anaerobically via glycolysis. The liver and adipose tissue can also uti-lize the phosphogluconate pathway, which provides energy and fatty acid synthesis. Most of the glucose absorbed following a meal is normally stored as gly-cogen, which only the liver and muscle are able to store in significant amounts. When glycogen stor-age capacity is exceeded, excess glucose is converted into fat. Insulin enhances glycogen synthesis, and epinephrine and glucagon enhance glycogenolysis. Because glucose consumption averages 150 g/day, and hepatic glycogen stores are normally only about 70 g/day, glycogen stores are depleted after 24 hr of fasting. After this period of fasting, gluconeogenesis, the de novo synthesis of glucose, is necessary to pro-vide an uninterrupted supply of glucose for other organs.

The liver and kidney are unique in their capac-ity to form glucose from lactate, pyruvate, amino acids (mainly alanine), and glycerol (derived from fat metabolism). Hepatic gluconeogenesis is vital in the maintenance of a normal blood glucose concen-tration. Glucocorticoids, catecholamines, glucagon, and thyroid hormone greatly enhance gluconeogen-esis, whereas insulin inhibits it.

When carbohydrate stores are saturated, the liver converts the excess ingested carbohydrates and proteins into fat. The fatty acids thus formed can be used immediately for fuel or stored in adipose tis-sue or the liver for later consumption. Nearly all cells utilize fatty acids derived from ingested fats or synthesized from intermediary metabolites of car-bohydrates and protein as an energy source—only red blood cells and the renal medulla are limited to glucose utilization. Neurons normally utilize only glucose, but, after a few days of starvation, they can switch to ketone bodies, the breakdown products of fatty acids that have been synthesized by the liver as an energy source.

To oxidize fatty acids, they are converted into acetylcoenzyme A (acetyl-CoA), which is then oxi-dized via the citric acid cycle to produce ATP. The liver is capable of high rates of fatty acid oxidation and can form acetoacetic acid (one of the ketone bodies) from excess acetyl-CoA. The acetoacetate released by hepatocytes serves as an alternative energy source for other cell types by reconversion into acetyl-CoA. Insulin inhibits hepatic ketone body production. Acetyl-CoA is also used by the liver for the production of cholesterol and phos-pholipids, which is necessary in the synthesis of cellular membranes throughout the body.

formation of plasma proteins. Deamination is necessary for the conversion of excess amino acids into carbohydrates and fats. The enzymatic pro-cesses, most commonly transamination, convert amino acids into their respective keto acids and pro-duce ammonia as a byproduct.

Ammonia formed from deamination (as well as that produced by colonic bacteria and absorbed through the gut) is highly toxic to tissues. Through a series of enzymatic steps, the liver combines two molecules of ammonia with CO 2 to form urea. The urea thus formed readily diffuses out of the liver and can then be excreted by the kidneys.

Nearly all plasma proteins, with the notable exception of immunoglobulins, are formed by the liver. These include albumin, α1-antitrypsin and other proteases/elastases, and the coagulation fac-tors. Albumin is responsible for maintaining a nor-mal plasma oncotic pressure and is the principal binding and transport protein for fatty acids and a large number of hormones and drugs. Consequently, changes in albumin concentration can

affect the concentration of the pharmacologically active, unbound fraction of many drugs.All coagulation factors, with the exception of factor VIII and von Willebrand factor, areproduced by the liver (see Table 32–2, Figure 32–5). Vascular endothelial cells synthe-size factor VIII, levels of which are therefore usu-ally maintained in chronic liver disease. Vitamin K is a necessary cofactor in the synthesis of pro-thrombin (factor II) and factors VII, IX, and X. The 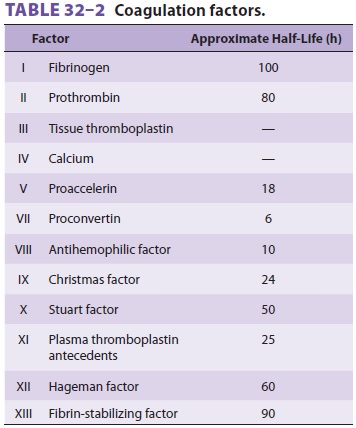 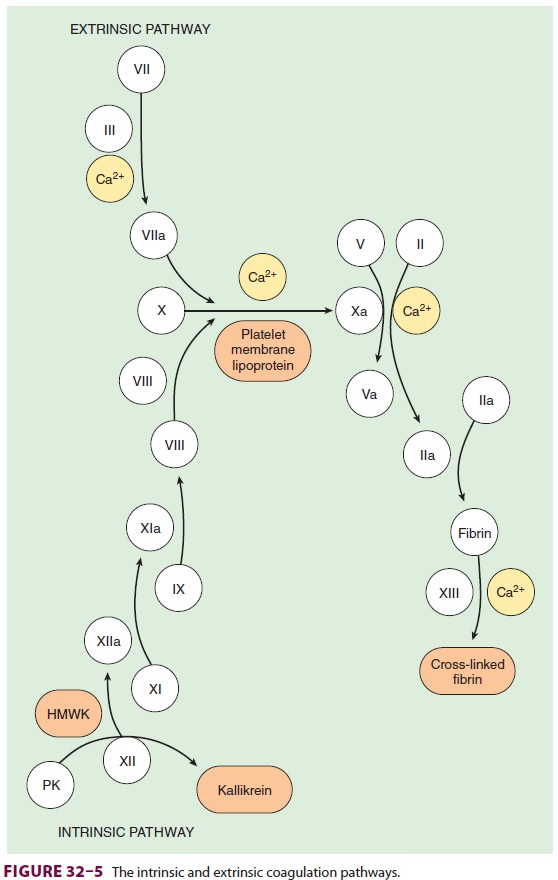 Many exogenous substances, including most drugs, undergo hepatic biotransformation, and the end-products of these reactions are usually either inactivated or converted to more water-soluble substances that can be readily excreted in bile or urine. Hepatic biotransformations are often cat-egorized as one of two types of reactions. Phase Ireactions modify reactive chemical groups throughmixed-function oxidases or the cytochrome P-450 enzyme systems, resulting in oxidation, reduc-tion, deamination, sulfoxidation, dealkylation, or methylation. Barbiturates and benzodiazepines are inactivated by phase I reactions. Phase II reactions, which may or may not follow a phase I reaction, involve conjugation of the substance with glucuro-nide, sulfate, taurine, or glycine. The conjugated compound can then be readily eliminated in urine or bile.

Some enzyme systems, such as those of cyto-chrome P-450, can be induced by a few drugs, such as ethanol, barbiturates, ketamine, and perhaps ben-zodiazepines. This can result in increased tolerance to the drugs’ effects. Conversely, some agents, such as cimetidine and chloramphenicol, can prolong the effects of other drugs by inhibiting these enzymes. Some drugs, including lidocaine, morphine, vera-pamil, labetalol, and propranolol, have very high rates of hepatic extraction from the circulation, and their metabolism is therefore highly dependent upon the rate of hepatic blood flow. As a result, a decrease in their metabolic clearance usually reflects decreased hepatic blood flow rather than hepatocel-lular dysfunction.

The liver plays a major role in hormone, vitamin, and mineral metabolism. It is an important site for the conversion of thyroxine (T4) into the more active tri-iodothyronine (T3), and degradation of thyroid hor-mone is principally hepatic. The liver is also the major site of degradation for insulin, steroid hormones (estrogen, aldosterone, and cortisol), glucagon, and antidiuretic hormone. Hepatocytes are the principal storage sites for vitamins A, B12, E, D, and K. Lastly, hepatic production of transferrin and haptoglobin is important because these proteins are involved in iron hemostasis, whereas ceruloplasmin is important in copper regulation.

Bile (Table 32–3) plays an important role in absorption of fat and excretion of bilirubin, cho-lesterol, and many drugs. Hepatocytes continu-ously secrete bile salts, cholesterol, phospholipids, conjugated bilirubin, and other substances into bile canaliculi.

Bile ducts from hepatic lobules join and eventu-ally form the right and left hepatic ducts. These ducts, in turn, combine to form the hepatic duct, which together with the cystic duct from the gallbladder becomes the common bile duct (Figure 32–6). The gallbladder serves as a reservoir for bile. The bile acids formed by hepatocytes from cholesterol are essential for emulsifying the insoluble components of bile and facilitating the intestinal absorption of lipids. Defects in the formation or secretion of bile salts interfere with the absorption of fats and fat-sol-uble vitamins (A, D, E, and K). Because of normally 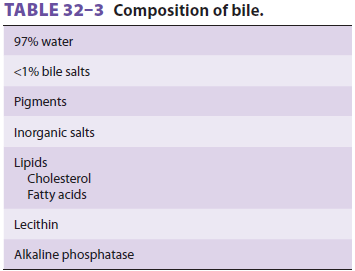 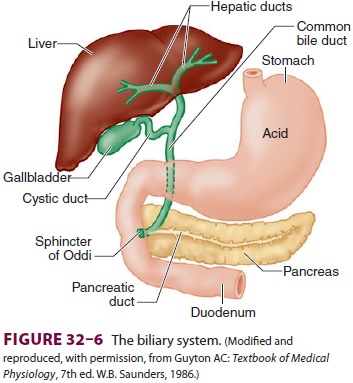 limited stores of vitamin K, a deficiency can develop in a few days. Vitamin K deficiency is manifestedas a coagulopathy due to impaired formation of prothrombin and of factors VII, IX, and X.

Bilirubin is primarily the end-product of hemo-globin metabolism. It is formed from degradation of the heme ring in Kupffer cells. Bilirubin is then released into blood, where it readily binds to albu-min. Hepatic uptake of bilirubin from the circula-tion is passive, but binding to intracellular proteins traps the bilirubin inside hepatocytes. Bilirubin is conjugated by the hepatocytes, primarily with gluc-uronide, and actively excreted into bile canaliculi.