The most commonly performed liver tests are neither sensitive nor specific.

The most commonly performed liver tests are nei-ther sensitive nor specific. No one test evaluates overall hepatic function, reflecting instead one aspect of hepatic function that must be interpreted in conjunction with other tests and clinical assess-ment of the patient. 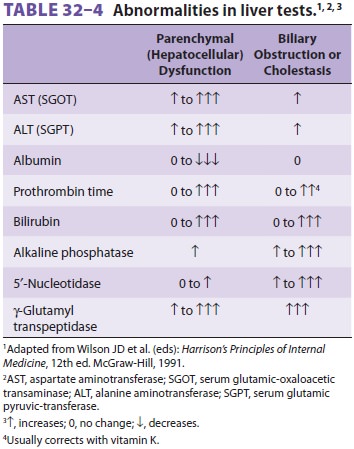 serum albumin, prothrombin time (PT, or inter-national normalized ratio [INR]), cholesterol, and pseudocholinesterase. Moreover, because of the liver’s large functional reserve, substantial cirrhosis may be present with few or no laboratory abnormalities.

The normal total bilirubin concentration, composed of conjugated (direct), water-soluble and uncon-jugated (indirect), lipid-soluble forms, is less than 1.5 mg/dL (<25 mmol/L) and reflects the balance between bilirubin production and excretion. Jaundice is usually clinically obvious when total bilirubin exceeds 3 mg/dL. A predominantly conjugated hyper-bilirubinemia (>50%) is associated with increased urinary urobilinogen and may reflect hepatocellular dysfunction, congenital (Dubin–Johnson or Rotor syndrome) or acquired intrahepatic cholestasis, or extrahepatic biliary obstruction. Hyperbilirubinemia that is primarily unconjugated may be seen with hemolysis or with congenital (Gilbert or Crigler– Najjar syndrome) or acquired defects in bilirubin conjugation. Unconjugated bilirubin is neurotoxic, and high levels may produce encephalopathy.

The PT, which normally ranges between 11–14 sec, depending on the control value,measures the activity of fibrinogen, prothrom-bin, and factors V, VII, and X. The relatively short half-life of factor VII (4–6 h) makes the PT useful in evaluating hepatic synthetic function of patients with acute or chronic liver disease. Prolongations of the PT greater than 3–4 sec from the control are considered significant and usually correspond to an INR 1.5. Because only 20% to 30% of normal factor activity is required for normal coagulation, prolon-gation of the PT usually reflects either severe liver disease or vitamin K deficiency. (See Table 32–5 for a list of coagulation test abnormalities.) 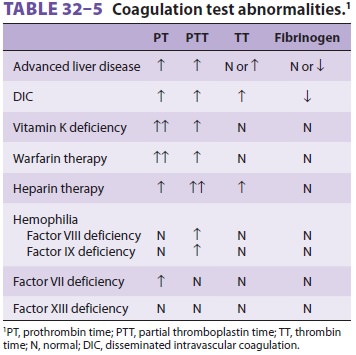 This technology provides a “real time” assessment of the coagulation status and utilizes thromboelas-tography (TEG ®), rotation thromboelastometry (ROTEM®), or Sonoclot® analysis to assess global coagulation via the viscoelastic properties of whole blood (Figure 32–7). A clear picture is provided of the global effect of imbalances between the proco-agulant and anticoagulant systems and the profibri-nolytic and antifibrinolytic systems and the resultant 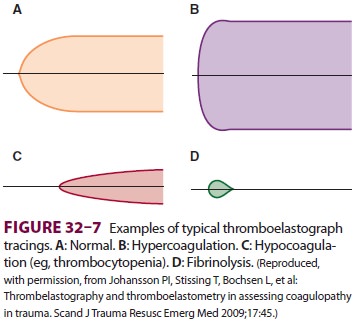 clot tensile strength, allowing precise management of hemostatic therapy. The rate of clot formation, the strength of the clot, and the impact of any lysis can be observed. The presence of disseminated intravas-cular coagulation can be evaluated, as can the effect of heparin or heparinoid activity. In addition, plate-let function can be assessed, including the effects of platelet inhibition.