Economic System refers to the manner in which individuals and institutions are connected together to carry out economic activities in a particular area. It is the methodology of doing economic activities to meet the needs of the society. There are three major types of economic systems. They are:

The term coined by Manfred D Steger (2002) to denote the new market ideology of globalisation that connects nations together through international trade and aiming at global development. This ideology is also termed as ‘Extended Capitalism’.

Capitalism and socialism are two extreme and opposite approaches. In capitalism, there is total freedom and private ownership of means of production. In socialism, there is no freedom for private and there is public ownership of means of production. Mixedism denotes the Co-existence of capitalism and socialism. The features, merits and demerits of various economic systems are discussed below. 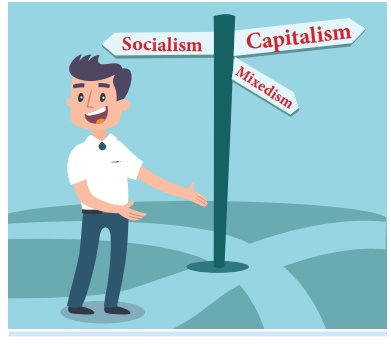 Adam Smith is the ‘Father of Capitalism’. Capitalistic economy is also termed as a free economy (Laissez faire, in Latin) or market economy where the role of the government is minimum and market determines the economic activities.

The means of production in a capitalistic economy are privately owned. 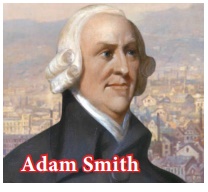 Manufacturers produce goods and services with profit motive. The private individual has the freedom to undertake any occupation and develop any skill. The USA, West Germany, Australia and Japan are the best examples for capitalistic economies. However, they do undertake large social welfare measures to safeguard the downtrodden people from the market forces.

1. Private Ownership of Property and Law of Inheritance: The basic feature of capitalism is that all resources namely, land, capital, machines, mines etc. are owned by private individuals. The owner has the right to own, keep, sell or use these resources according to his will. The property can be transferred to heirs after death.

2. Freedom of Choice and Enterprise: Each individual is free to carry out any occupation or trade at any place and produce any commodity. Similarly, consumers are free to buy any commodity as per their choice.

3. Profit Motive: Profit is the driving force behind all economic activities in a capitalistic economy. Each individual and organization produce only those goods which ensure high profit. Advance technology, division of labour, and specialisation are followed. The golden rule for a producer under capitalism is ‘to maximize profit.’

4. Free Competition: There is free competition in both product and factor market. The government or any authority cannot prevent firms from buying or selling in the market. There is competition between buyers and sellers.

5. Price Mechanism: Price mechanism is the heart of any capitalistic economy. All economic activities are regulated through price mechanism i.e, market forces of demand and supply.

6. Role of Government: As the price mechanism regulates economic activity, the government has a limited role in a capitalistic economy. The government provides basic services such as, defense, public health, education, etc.

7. Inequalities of Income: A capitalist society is divided into two classes – ‘haves’ that is those who own property and ‘have-nots’ who do not own property and work for their living. The outcome of this situation is that the rich become richer and poor become poorer. Here, economic inequality goes on increasing.

1. Automatic Working: Without any government intervention, the economy works automatically.

2. Efficient Use of Resources: All resources are put into optimum use.

3. Incentives for Hard work: Hard work is encouraged and entrepreneurs get more profit for more efficiency.

5. ConsumersSovereignty:Allproduction activities are aimed at satisfying the consumers.

7. Development of New Technology: As profit is aimed at, producers invest on new technology and produce quality goods.

2. Wastage of Resources: Large amount of resources are wasted on competitive advertising and duplication of products.

3. Class Struggle: Capitalism leads to class struggle as it divides the society into capitalists and workers.

5. Production of non essential goods: Even the harmful goods are produced if there is possibility to make profit.

The Father of Socialism is Karl Marx. Socialism refers to a system of total planning, public ownership and state control on economic activities. Socialism is defined as a way of organizing a society in which major industries are owned and controlled by the government, A Socialistic economy is also known as ‘Planned Economy’ or ‘Command Economy’. 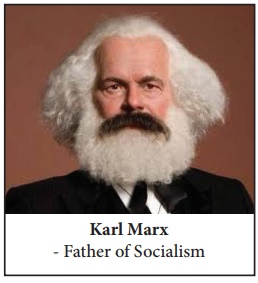 In a socialistic economy, all the resources are owned and operated by the government. Public welfare is the main motive behind all economic activities. It aims at equality in the distribution of income and wealth and equal opportunity for all. Russia, China, Vietnam, Poland and Cuba are the examples of socialist economies. But, now there are no absolutely socialist economies. 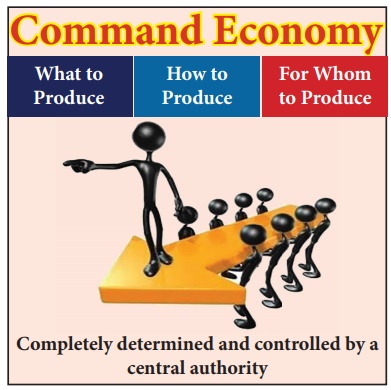 1. Public Ownership of Means of Production: All resources are owned by the government. It means that all the factors of production are nationalized and managed by the public authority.

2. Central Planning: Planning is an integral part of a socialistic economy. In this system, all decisions are undertaken by the central planning authority.

3. Maximum Social Benefit: Social welfare is the guiding principle behind all economic activities. Investments are planned in such a way that the benefits are distributed to the society at large.

4. Non-existence of Competition: Under the socialist economic system there is absence of competition in the market. The state has full control over production and distribution of goods and services. The consumers will have a limited choice.

5. Absence of Price Mechanism: The pricing system works under the control and regulation of the central planning authority.

6. Equality of Income: Another essential feature of socialism is the removal and reduction of economic inequalities. Under socialism private property and the law of inheritance do not exist.

7. Equality of Opportunity: Socialism provides equal opportunity for all through free health, education and professional training.

8. Classless Society: Under socialism, there is a classless society and so no class conflicts. In a true socialist society, everyone is equal as far as economic status is concerned.

1. Reduction in Inequalities: No one is allowed to own and use private property to exploit others.

2. Rational Allocation of Resources: The central planning authority allocates the resources in a planned manner. Wastages are minimised and investments are made in a pre planned manner.

3. Absence of Class Conflicts: As inequalities are minimum, there is no conflict between rich and poor class. Society functions in a harmonious manner.

4. End of Trade Cycles: Planning authority takes control over production and distribution of goods and services. Therefore, economic fluctuations can be avoided.

1. Red Tapism and Bureaucracy: As decision are taken by government agencies, approval of many officials and movement of files from one table to other takes time and leads to red tapism.

2. Absence of Incentive: The major limitation of socialism is that this system does not provide any incentive for efficiency. Therefore, productivity also suffers.

3. Limited Freedom of Choice: Consumers do not enjoy freedom of choice over the consumption of goods and services.

4. Concentration of Power: The State takes all major decisions. The private takes no initiative in making economic decisions. Hence, the State is more powerful and misuse of power can also take place.

In these economies, resources are owned by individuals and the government. India, England, France and Brazil are the examples of mixed economy.

1. Ownership of Property and Means of Production: The means of production and properties are owned by both private and public. Public and Private have the right to purchase, use or transfer their resources.

2. Coexistence of Public and Private Sectors: In mixed economies, both private and public sectors coexist. Private industries undertake activities primarily for profit. Public sector firms are owned by the government with a view to maximize social welfare.

3. Economic Planning: The central planning authority prepares the economic plans. National plans are drawn up by the Government and both private and public sectors abide. In general, all sectors of the economy function according to the objectives, priorities and targets laid down in the plan.

4. Solution to Economic Problems: The basic problems of what to produce, how to produce, for whom to produce and how to distribute are solved through the price mechanism as well as state intervention.

6. Freedom and Control: Though private has freedom to own resources, produce goods and services and distribute the same, the overall control on the economic activities rests with the government.

1. Rapid Economic Growth: The best advantage of mixed economy is that it promotes rapid economic growth. Thus, both public requirements and private needs are taken care of.

5. Special Advantages to the Society: The government safeguards the interest of the workers and weaker sections by legislating on minimum wages, and rationing, establishing fair price shops and formulating social welfare measures.

1. Lack of Coordination: The greatest drawback of mixedism is lack of coordination between public sector and private sector. As both work with divergent motives, it creates many coordination related problems.

2. Competitive Attitude: It is expected that both government and private should work with a complementary spirit towards the welfare of the society, but in reality they are competitive in their activities.

3. Inefficiency: Most of the public sector enterprises remain inefficient due to lethargic bureaucracy, red tapism and lack of motivation.

4. Fear of Nationalization: In a mixed economy, the fear of nationalization discourages the private entrepreneurs in their business operations and innovative initiatives.

5. Widening Inequality: Ownership of resources, laws of inheritance and profit motive of people widens the gap between rich and poor.

Ultimately the inequality of capitalism and inefficiency of socialism are found in mixed economies. 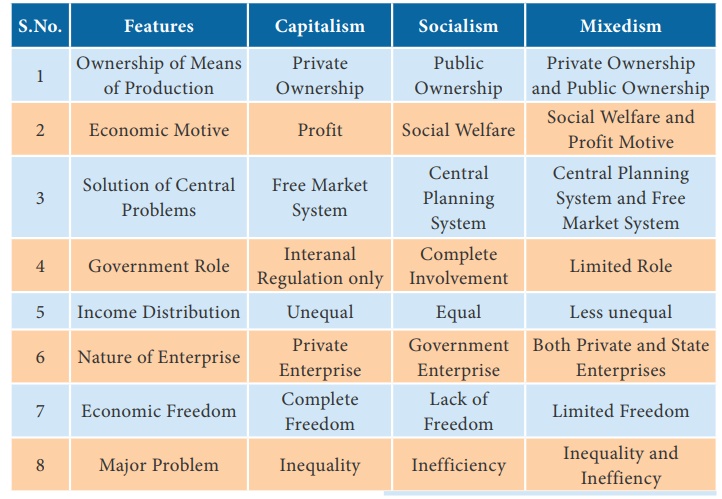