The earth segment of a satellite communications system consists of the transmit and receive earth stations. The simplest of these are the home TV receive-only (TVRO) systems, and the most complex are the terminal stations used for international communications networks. Also included in the earth segment are those stations which are on ships at sea, and commercial and military land and aeronautical mobile stations.

As mentioned in earth stations that are used for logistic sup- port of satellites, such as providing the telemetry, tracking, and command (TT&C) functions, are considered as part of the space segment.

Earth station is a vital element in any satellite communication network.

The function of an earth station is to receive information from or transmit information to, the satellite network in the most cost-effective and reliable manner while retaining the desired signal quality. The design of earth station configuration depends upon many factors and its location. But it is fundamentally governed by its

Location which are listed below,

• Function of the transmitter

• Function of the receiver

Two other important subsystems are

The earth station depends on the following parameters 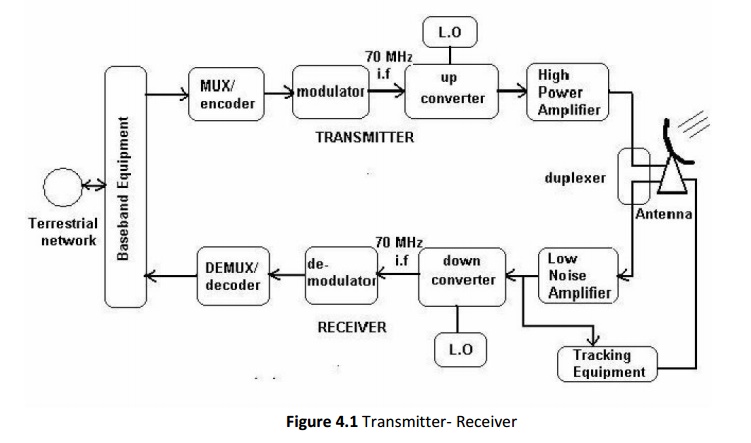 Digital information in the form of binary digits from terrestrial networks enters earth station and is then processed (filtered, multiplexed, formatted etc.) by the base band equipment.

• The encoder performs error correction coding to reduce the error rate, by introducing extra digits into digital stream generated by the base band equipment. The extra digits carry information.

• On the receive side, the earth station antenna receives the low-level modulated R.F carrier in the downlink frequency spectrum.

• The low noise amplifier (LNA) is used to amplify the weak received signals and improve the signal to Noise ratio (SNR). The error rate requirements can be met more easily.

• R.F is to be reconverted to I.F at 70 or 140 MHz because it is easier design a demodulation to work at these frequencies than 4 or 12 GHz.

• The demodulator estimate which of the possible symbols was transmitted based on observation of the received if carrier.

• The decoder performs a function opposite that of the encoder. Because the sequence of symbols recovered by the demodulator may contain errors, the decoder must use the uniqueness of the redundant digits introduced by the encoder to correct the errors and recover information-bearing digits.

• The information stream is fed to the base-band equipment for processing for delivery to the terrestrial network.

• The tracking equipments track the satellite and align the beam towards it to facilitate communication.