The antenna system consist of

In an axi-symmetric configuration the antenna axes are symmetrical with respect to the reflector ,which results in a relatively simple mechanical structure and antenna mount.

In primary, feed is located at the focal point of the parabolic reflector.  Many dishes use only a single bounce, with incoming waves reflecting off the dish surface to the focus in front of the dish, where the antenna is located. when the dish is used to transmit ,the transmitting antenna at the focus beams waves toward the dish, bouncing them off to space. This is the simplest arrangement.

Many dishes have the waves make more than one bounce .This is generally called as folded systems. The advantage is that the whole dish and feed system is more compact. There are several folded configurations, but all have at least one secondary reflector also called a sub reflector, located out in front of the dish to redirect the waves.

A common dual reflector antenna called Cassegrain has a convex sub  reflector positioned in front of the main dish, closer to the dish than the focus.

This sub reflector bounces back the waves back toward a feed located on the main dish’s center, sometimes behind a hole at the center of the main dish.

Sometimes there are even more sub reflectors behind the dish to direct the waves to the fed for convenience or compactness.

This system has a concave secondary reflector located just beyond the primary focus. This also bounces the waves back toward the dish.

The performance of tan axi-symmetric configuration is affected by the blockage of the aperture by the feed and the sub reflector assembly. The result is a reduction in the antenna efficiency and an increase in the side lobe levels. The asymmetric configuration can remove this limitation..This is achieved by off- setting the mounting arrangement of the feed so that it does not obstruct the main beam.As a result ,the efficiency and side lobe level performance are improved.

Mostly parabolic reflectors are used as the main antenna for the earth stations because of the high gain available from the reflector and the ability of focusing a parallel beam into a point at the focus where the feed,i.e., the receiving/radiating element is located .For large antenna system more than one reflector surfaces may be used in as in the cassegrain antenna system.

Earth stations are also classified on the basis of services for example:

3.TV receive only and two way telephony and data

For mechanical design of parabolic reflector the following parameters are required to be considered:

 Size of the reflector

The gain of the antenna is given by

Where Aeff is the aperture

Η is efficiency of antenna system

For a parabolic antenna with circular aperture diameter D, the gain of the antenna is :

In the design of feed ,the ratio of focal length F to the diameter of the reflector D of the antenna system control the maximum angle subtended by the reflector surface on the focal point. Larger the F/D ratio larger is the aperture illumination efficiency and lower the cross polarization. 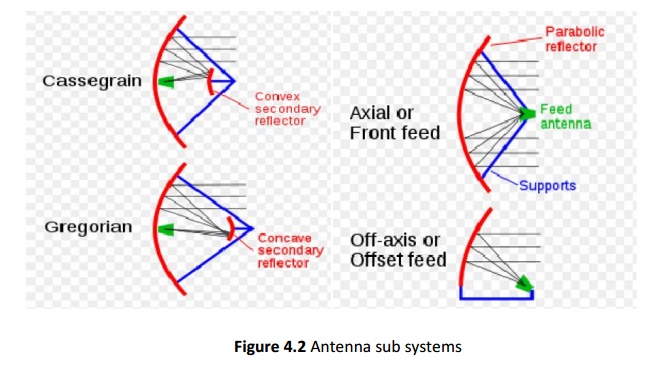 Type of antenna mount is determined mainly by the coverage requirement and tracking requirements of the antenna systems. Different types of mounts used for earth station antenna are:

i) The Azimuth –elevation mount :

This mount consists of a primary vertical axis. Rotation around this axis controls the azimuth angle. The horizontal axis is mounted over the primary axis, providing the elevation angle control.

It consists of a horizontal primary axis (X-axis) and a secondary axis (Y- axis) and at right angles to it. Movement around these axes provides necessary steering.

There have been some interesting recent developments in auto-track techniques which can potentially provide high accuracies at a low cost.

In one proposed technique the sequential lobing technique has been I implemented by using rapid electronic switching of a s single beam which effectively approximates simultaneous lobbing.