Early Concepts of Classification of Elements

Early Concepts of Classification of Elements

In 1817, Johann Wolfgang Dobereiner, a German chemist, suggested a method of grouping of elements based on their relative atomic masses. He arranged the elements into groups containing three elements each. He called these groups as ‘triads’ (tri – three).

Dobereiner showed that when the three elements in a triad are arranged in the ascending order of their atomic masses the atomic mass of the middle element is nearly the same as average of atomic masses of other two elements. This statement is called the Dobereiner’s law of triads. Table 4.1 shows the law of triads proposed by Dobereiner: 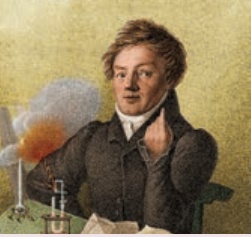 ·           Dobereiner could identify only three triads from the elements known at that time and all elements could not be classified in the form of triads.

·           The law was not applicable to elements having very low atomic mass and very high atomic mass.

In 1866, John Newlands arranged 56 known elements in the increasing order of their atomic mass. He observed that every eighth element had properties similar to those of the first element like the eighth note in an octave of music is similar to the first and this arrangement was known as “law of octaves”. 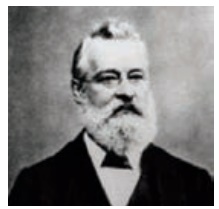 The octave of Indian music system is sa, re, ga, ma, pa, da, ni, sa. The first and last notes of this octave are same i.e. sa. Likewise, in the Newlands’ table of octaves, the element ‘F’ is eighth from the element ‘H’ thus they have similar properties.

·           There are instances of two elements being fitted into the same slot, e.g. cobalt and nickel.

·           Some elements, totally dissimilar in their properties, were fitted into the same group. (Arrangement of Co, Ni, Pd, Pt and Ir in the row of halogens)

·           The law of octaves was not valid for elements that had atomic masses higher than that of calcium.

·           Newlands’ table was restricted to only 56 elements and did not leave any room for new elements.

·           Discovery of inert gases (Neon. Argon….) at later stage made the 9th element similar to the first one. Eg: Neon between Fluorine and Sodium.

In 1869, Russian chemist,Dmitri Mendeleev observed that the elements of similar properties repeat at regular intervals when the elements are arranged in the order of their atomic masses. Based on this, he proposed the law of periodicity which states that “the physical and chemical properties of elements are the periodic functions of their atomic masses”. He arranged 56 elements known at that time according to his law of periodicity. This was best known as the short form of periodic table. 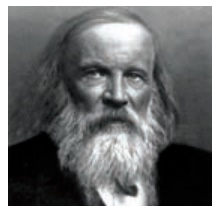 ·           Each group has two subgroups ‘A’ and ‘B’. All the elements appearing in a group were found to have similar properties.

·           For the first time, elements were comprehensively classified in such a way that elements of similar properties were placed in the same group.

·           It was noticed that certain elements could not be placed in their proper groups in this manner.The reason for this was wrongly determined atomic masses,and consequently those wrong atomic masses were corrected. Eg: The atomic mass of beryllium was known to be 14.Mendeleev reassessed it as 9 and assigned beryllium a proper place.

·           Columns were le vacant for elements which were not known at that time and their properties also were predicted.is gave motivation to experiment in Chemistry. Eg: Mendeleev gave names Eka Aluminium and Eka Silicon to those elements which were to be placed below Aluminium and Silicon respectively in the periodic table and predicted their properties. The discovery of Germanium later on, during his life time, proved him correct. 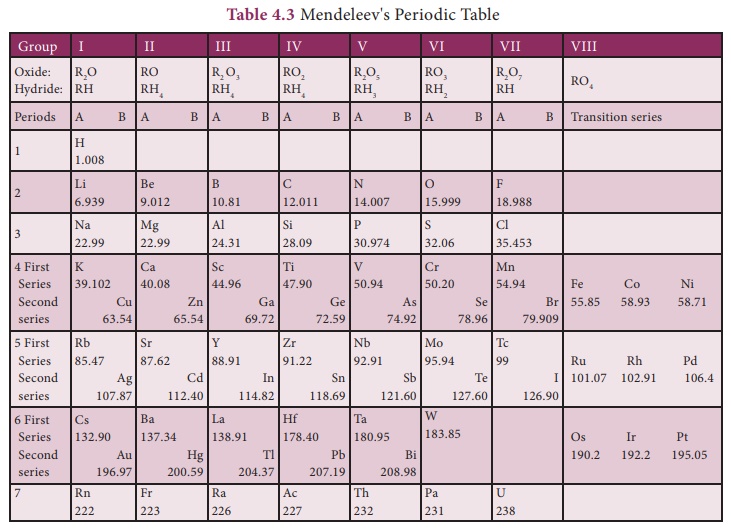 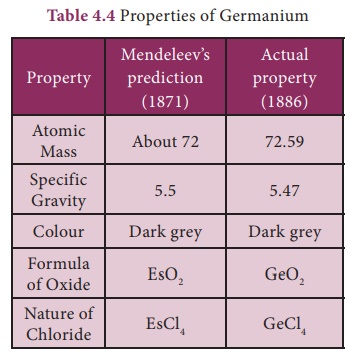 ·           No proper position could be given to the element hydrogen. Non-metallic hydrogen was placed along with metals like lithium (Li), sodium (Na) and potassium (K).