While many drug moleculs can be eliminated directly via the kidney, we have seen that others, predominantly hy-drophobic ones, do not get efficiently secreted in the urine, be it because of plasma protein binding or because of reup-take in the distal tubule.

While many drug moleculs can be eliminated directly via the kidney, we have seen that others, predominantly hy-drophobic ones, do not get efficiently secreted in the urine, be it because of plasma protein binding or because of reup-take in the distal tubule. Even with some of those drugs that are amenable to renal elimination, metabolism may occur and give rise to changes in drug efficacy or to toxic side ef-fects. Drug metabolism happens largely in the liver.

Drug metabolism is commonly – and somewhat arbitrarily – subdivided into phase I and phase II reactions. In Figure 2.22, phase I would correspond to the conversion of a drug molecule to a more hydrophilic metabolite. The latter may then either be directly excreted in the urine, or undergo conjugation with a larger polar moiety before excretion. 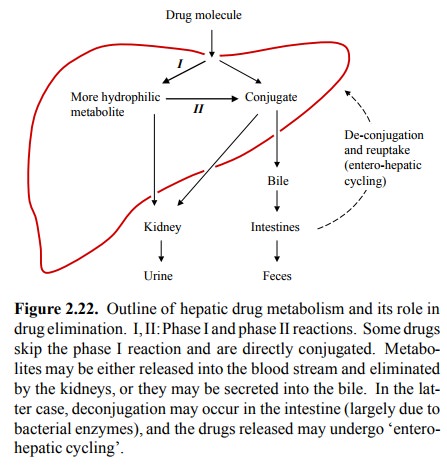 1. Example: Metabolism of phenobarbital and of morphine

We have seen above that phenobarbital is not efficiently eliminated in the urine. It therefore is a good candidate for elimination by hepatic metabolism. The molecule does not have any good functional groups that could serve as points of attachment for glucuronic acid or other polar moieties. Therefore, phenobarbital first has to undergo a hydroxyla-tion reaction before conjugation may occur – an example of a phase I reaction. Conjugation may then occur either with glucuronic acid, or with sulfate (Figure 2.23a). Either mod-ification will inactivate the molecule and render it suitable to renal excretion. The glucuronide may also be excreted in the bile. 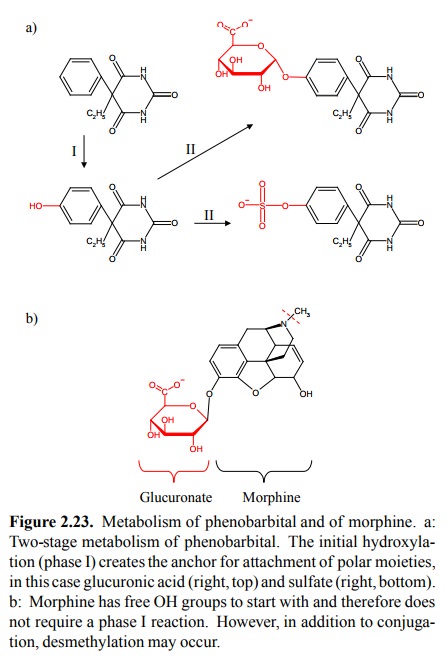 However, some drugs may not undergo a phase I reaction at all but undergo conjugation directly. An example is provid-ed my morphine2. Morphine has two free hydroxyl groups, to either or both of which a UDP-glucuronosyltransferase in the liver ER will attach a glucuronic acid moiety.

The conjugates formed with glucuronic acid are called glu-curonides, not glucuronates, because the bond created is a glycosidic bond but not an ester bond. The carboxylic acid group remains free and contributes to the overall hy-drophilicity (Figure 2.23b).

Enzymes of the cytochrom P450 family are responsible for most phase I reactions. Cytochrome P450 enzymes are extremely widespread in nature, and they occur in both prokaryotic and eukaryotic cells. In eukaryotic cells, these enzymes mostly reside in the membrane of the smooth en-doplasmic reticulum, but some variants are found in the mi-tochondria. 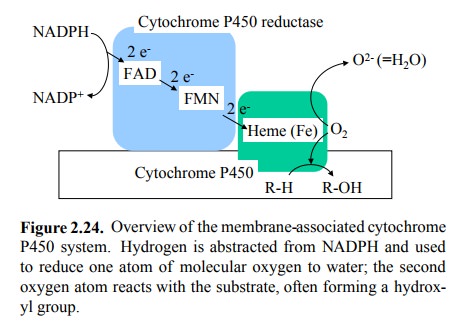 A cytochrome P450 enzyme works in conjunction with a reductase, which supplies it with electrons from NADPH (and uses FAD and FMN sequentially in the electron trans-fer process). The two electrons are delivered to the heme cofactor in the active center of the cytochrome, which in turn transfers them to one of the two oxygen atoms of O2 to yield water (Figure 2.24). Presumably, the free energy of the oxidation of NADPH is somehow utilized to facilitate the reaction of the other oxygen with the organic substrate. This may result in the formation of a phenolic hydroxyl group, as in the case of phenobarbital. However, the oxygen may react with the substrate in various ways:

•     Formation of epoxides from aromatic precursors. This reaction may actually be quite harmful. Epoxides are highly reactive and can do a lot of damage in the cell (more on this below). 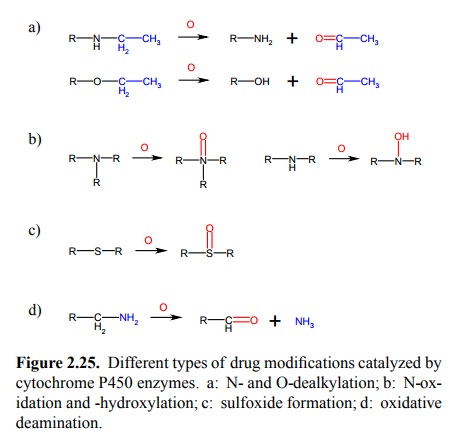 The effects of cytochromes P450 in drug metabolism are thus quite varied, and they involve numerous enzyme species. However, it is noteworthy that one individual en-zyme– named CYP3A4 – participates in the conversion of up to 60% of all drugs that do get metabolized. While CYP3A4 is always present to some extent, the activity can be substantially increased by a variety of drugs by a process called enzyme induction. Basically, induction of drug-me-tabolizing enzymes works like the good, old lac operon in Escherichia coli (Figure 2.26): The drug enters the cytosol and associates with a protein receptor molecule named pregnane X receptor (PXR) which is homologous to a num-ber of endogenous hormone receptors, many of which bind steroid hormones. 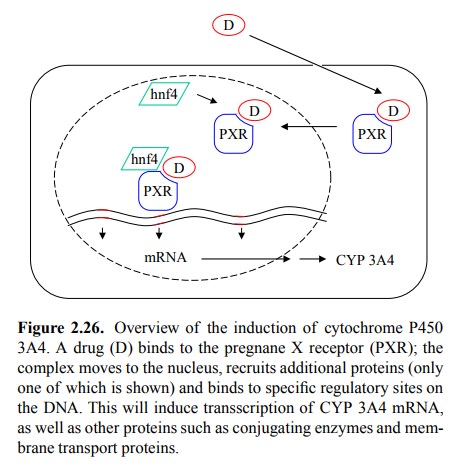 Upon drug binding, this receptor translocates to the nucle-us, associates with some more proteins (including hnf4) and binds to specific sites in the DNA to up-regulate sever-al genes, including CYP3A4. Interestingly, it also induces membrane transporters such as P-glycoprotein that are in-volved in excretion of metabolites from the cell.

PXR has a remarkably broad specificity, including both en-dogenous and exogenous ligands. Strong inducers among clinically important drugs are phenytoin and phenobarbital (both used to treat epilepsia), rifampicin (for tuberculosis), and ketoconazole (for fungal infections). All these drugs are also substrates of CYP3A4, as are synthetic steroid hormones used for contraception. This leads to a variety of clinically important drug interaction phenomena: Oral contraception will cease to work under treatment with ri-fampicin or phenytoin; dosages of phenytoin will have to be increased during concomitant treatment with rifampicin, etc.

Another, homologous nuclear receptor / transcriptional regulator called AHR (aromatic hydrocarbon receptor) re-sponds to (surprise) aromatic hydrocarbons such asben-zopyrene, and it induces the enzyme cytochrome P450 1A1. This enzyme will not only perform hydroxylations but also introduce an epoxy group into the aromate. Polycyclic aro-mates tend to `intercalate' between the base pairs of DNA, where the epoxy group will react with some amino group, thus covalently fixing the damage in the DNA (Figure 2.27). Although DNA repair mechanisms do exist, they are not 100% effective. Introduction of epoxy groups into ini-tially inert molecules thus converts them into reactive ones that may potentially cause mutations and, ultimately, can-cer. This reaction is not at all limited to liver tissue but is ubiquitous; it very commonly occurs in the lungs. In fact, benzopyrene and related compounds – formed during com-bustion of tobacco or the allegedly indispensable wonder drug marijuana – are responsible for the induction of lung cancer. 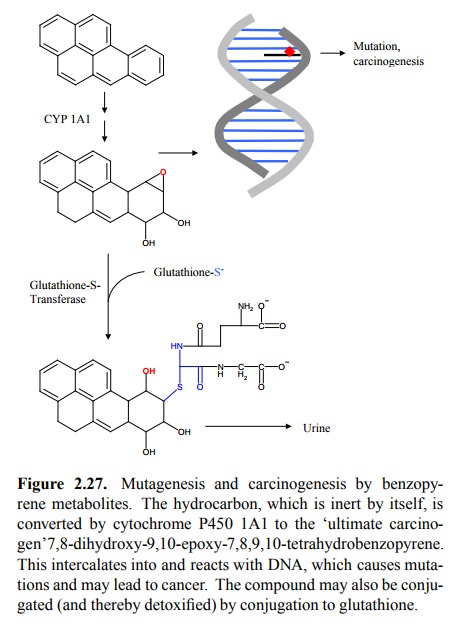 We have already seen a variety of conjugation reactions in the foregoing examples. Important reactions are

•     Glucuronidation. These reactions are catalysed by glu-curonosyltransferases and use the cosubstrate UDP-glu-curonic acid. The glucuronate is most commonly trans-ferred to a hydroxyl group or to an amino group.

•     Acetylation. This is mediated by acetyltransferases, uses acetyl-CoA and again mainly involves hydroxyl or amino groups.

•     Sulfation. Sulfotransferases use 3-phosphoadenosine-5-phosphosulfate (PAPS) as a cosubstrate. It concerns mostly hydroxyl groups.

•     Methylation. Methyltransferases use S-Adenosylme-thionine as cosubstrate. Targets are hydroxyl, amino and sulfhydryl groups.

•     Glutathione conjugation. This is particularly important with epoxides (Figure 2.27) but may also affects other functional groups. 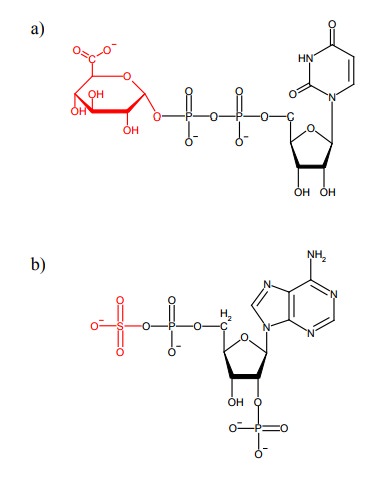 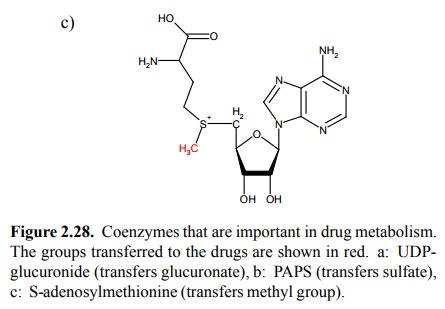 Glucuronidation, sulfation and glutathione conjugation will all increase the polarity of the drug substrate and there-fore facilitate renal elimination. In contrast, methylation would not seem to increase the polarity of the drug. Nor would it render the drug any more amenable to further con-jugation; rather, the methyl group introduced would tend to block reactive groups that could otherwise be used for the attachment of glucuronic acid. What, then, is the `rationale' of methylation? It may simply consist in the reduction or abolition of the drug's specific activity by the change in its structure. The same would seem to apply to acetylation, which utilizes the good, old acetyl-CoA as a cosubstrate, and is shown in Fig. 2.30 for isoniazid (= isonicotinic acid hydrazide), a tuberculostatic agent.

Phenolic or alcoholic hydroxyl groups are the most com-mon functional groups to be conjugated with glucuronic acid, as shown above for phenobarbital and morphine. Oth-er possible sites of attachment include carboxylic acids, amines, hydroxylamines, and thiol groups. This versatility is in keeping with the fact that glucuronidation is the most common type of drug conjugation. With this modification, the dug molecule acquires a negative charge and several hydroxyl groups, which will render it considerably more polar and thus fit for excretion. Excretion may happen ei-ther by way of the urine, or via the bile4. Hepatic secretion (into the bile) works efficiently because all cells in the liver tissue are not only connected to the blood vessels but also to capillary tributaries of the bile duct. Glucuronides may be cleaved in the large intestine by bacteria eager to metab-olize the glucuronic acid. One such bacterium that possess-es glucuronidase is our good friend Escherichia coli. The released drug or metabolite may then be taken up from the intestine again and then reach the liver, thus undergoing a so-called enterohepatic cycle (Fig. 2.22, above). This ef-fect may result in considerably delayed drug elimination. A practically important example is digitoxin (discussed in the chapter on calcium), which is used in the treatment of heart disease. The half-life of this drug extended to sever-al days because of enterohepatic cycling. It is nevertheless often preferred over its analogue digoxin (which is renal-ly eliminated) in those patients who have impaired kidney function. 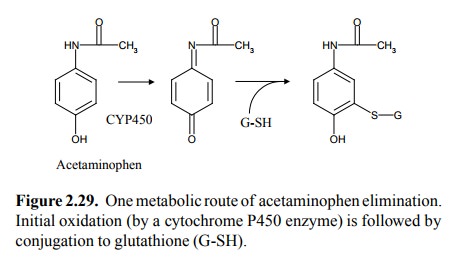 Glutathione is involved as a reducing agent in a multiplic-ity of reactions in cell metabolism. Because of its free sulfhydryl group, it is a very strong nucleophile, and be-cause of that it is useful in the detoxification of the more difficult substrates such as epoxides. Its depletion by drug conjugation may result in severe liver damage. An exam-ple of such toxicity is acetaminophen, which at standard dosages is a well-tolerated drug but is highly toxic to the liver at just 3 or 4 times that amount (Figure 2.29).

The `classical' model of drug metabolism by acetylation is the tuberculostatic drug isoniacide (isonicotinic acid hy-drazide). The metabolism of isoniazide has two interest-ing aspects: Firstly, non-enzymatic hydrolysis of the acetyl metabolite releases acetylhydrazine, which in turn is toxic. This, then, is an example of detrimental drug metabolism (Figure 2.30a, b). 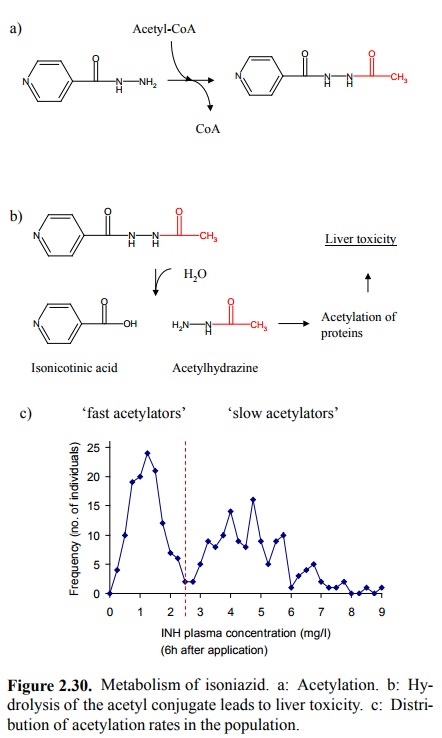 Secondly, the rate of the enzymatic acetylation shows con-siderable inter-individual variation. This is illustrated in Fig. 2.30c. Shown are the plasma levels of unconjugated (i.e., not yet acetylated) isoniazid in the plasma, 6 hours af-ter intake of a certain dosage of the drug.

The distribution is clearly bimodal (which means, it has two separate peaks). People with a plasma level of more than 2.5 mg/l are deemed `slow acetylators'. This is actually a genetic trait that follows Mendelian inheritance, and it is obviously important for the individual adjustment of isoni-azid dosage. It is the `classical' but by no means single ex-ample of genetic variation in drug metabolism. The study of phenomena of this type is called `pharmacogenetics', and there actually is a scientific journal of that name.

7. Other reactions in drug metabolism

The conversions of prontosil (azo reduction) and bacampi-cillin (ester hydrolysis), discussed in the introduction, are examples of other important reactions in drug metabolism.