Once the drug has entered the systemic circulation, it needs to reach its target site. Target sites may be located in vari-ous compartments:

Once the drug has entered the systemic circulation, it needs to reach its target site. Target sites may be located in vari-ous compartments:

1.  Within the blood vessels. Example: blood coagulation / clot dissolution. No problems of distribution here, drug molecules of any size and shape can be used (when intravenously applied).

2.  In the organ tissue, outside the blood vessels, but extra-cellular or superficially exposed on the cell surface. Ex-ample: Most receptors for hormones and transmitters.

3.  In the organ tissue, intracellularly located. Example: Many enzyme inhibitors.

An important factor in the distribution of drugs is the per-meability of the capillaries. Capillaries are the microscop-ically small blood vessels across the very thin walls of which metabolites and gases are exchanged between blood and tissues. Capillaries have a cellular layer – the endothe-lium, supported by a basal membrane consisting of proteins and proteoglycans (Figure microcirculation).

In the general circulation, the endothelial cells have gaps between them (and sometimes fenestrations across individ-ual cells, to the same effect). The permeability then is de-termined by the sieving properties of the basal membrane, which permits diffusion of salts, small molecules, and even some proteins, although most plasma proteins are retained. This type of capillary does not present a barrier to the dis-tribution of most drugs. However, in the brain and spinal chord (the central nervous system, CNS), the endothelial cells are tightly connected by structures called `tight junc-tions' and do not have fenestrations. In addition, a second contiguous cellular layer is formed around the capillaries by the glia cells. This adds up to four cell membranes layered in series – a structure that is referred to as the blood brain barrier. Therefore, even small molecules cannot freely mi-grate into the brain tissue – or only so, if they are extraordi-narily membrane-permeant.

Additional cell membrane barriers (plasma membrane, and possibly organelle membranes) will have to be overcome if the drug target is located intracellularly. It thus turns out that cell membranes are of major importance as barriers toward drug distribution. 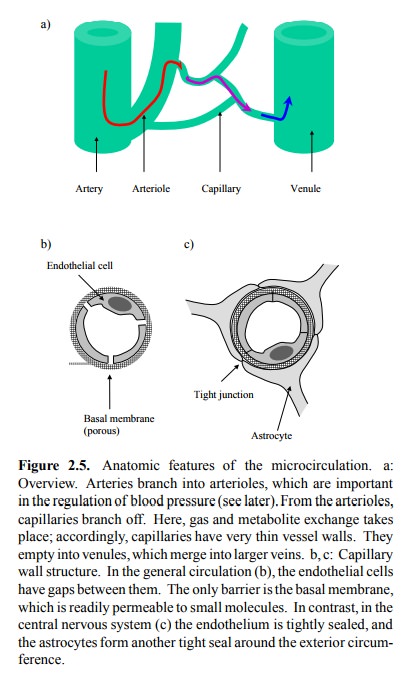 2. Drug hydrophobicity and permeation across membranes

Figure 2.6a shows the general structure of a lipid bilayer (yawn). The obstacle to drug diffusion is the hydrophobic core of the membrane. Substances that are lipophilic will traverse the membrane more easily, because they readily partition into this hydrophobic compartment (Figure 2.6b). 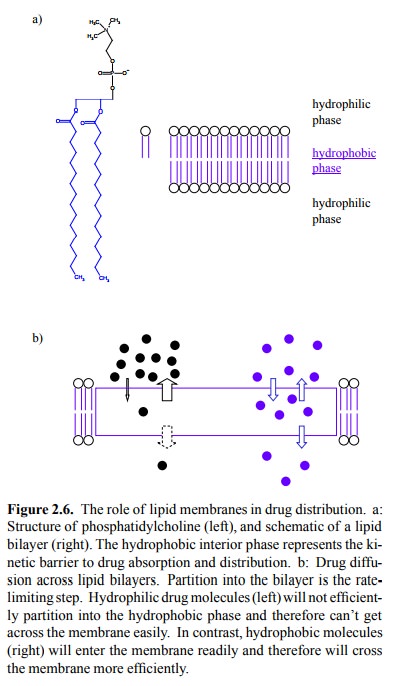 The lipid solubility of an organic molecule is influenced in predictable ways by the functional groups it contains. Charged and polar moieties will reduce lipid solubility, and therefore render the drug molecules less membrane-perme-ant. Fig. 2.7a shows some examples.

To increase lipid solubility, a drug may be applied as a `pro-drug' that has some hydrophilic groups masked by more hydrophobic ones. An example is bacampicillin, which is a derivative of the antibiotic ampicillin (Figure 2.7b). Ester-ification of the carboxylic acid in ampicillin facilitates up-take from the gut lumen. Esterases present in the intestinal mucosal cells will cleave the ester and release ampicillin, which is then passed on into the circulation. 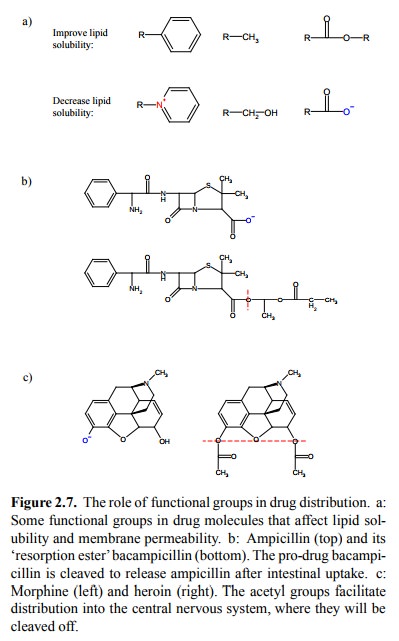 Masking hydrophilic groups also enhances the uptake of drugs into the brain. A classical example is heroin, which is the diacetylated derivative of morphine (Figure 2.7c). Ironically, heroin was invented in an attempt to overcome the addictive effects of morphine. Methadone was later invented to avoid those of heroin.

Another strategy to improve the membrane permeant prop-erties of a drug is based on the effect of `non-ionic diffu-sion'. An example is provided by the two `ganglion-block-ing' agents hexamethonium and mecamylamine, which act as antagonists at certain receptors of the transmitter acetyl choline (Figure 2.8a) and were formerly used as antihyper-tensive agents. Acetylcholine is a quaternary amine; so is hexamethonium. As a (dual) quaternary amine, hexametho-nium is not able to traverse membranes and thus can only be applied intravenously. Mecamylamine, however, is a ter-tiary amine and can adopt an uncharged (though pharmaco-logically inactive) form that traverses membranes with ease. Having reached its target site, it can change back into the charged form and exert its effect. It can therefore be orally applied. 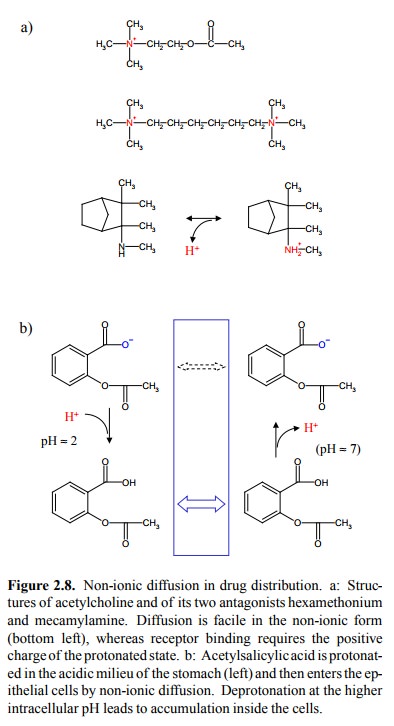 Non-ionic diffusion can also produce unwanted effects, as in the case of aspirin (acetylsalicylic acid; figure 2.8b). In the acidic milieu of the stomach, this molecule will be protonated and thus uncharged, which promotes its diffu-sion into the cells of the stomach mucous membrane. In-side the cell, the pH is very close to neutral, which will lead to deprotonation of aspirin. Diffusion of the deprotonated (charged) form out of the cell will be much slower than en-try, so that aspirin will accumulate inside the cells to con centrations considerably higher than in the stomach lumen. Aspirin, compared to other drugs that share its mechanism of action (inhibition of cyclooxygenase; see later), has a stronger tendency to trigger side effects such as gastritis and gastric or duodenal ulcera. 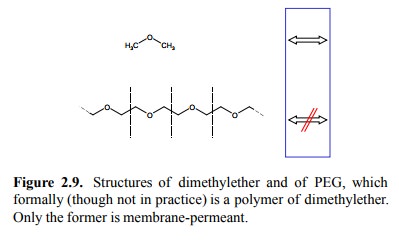 Molecular size is another factor that is relevant to the ease of membrane permeation. This may be illustrated by com-paring dimethylether (which crosses membranes readily) to polyethyleneglycol, which may formally be considered a linear polymer of dimethylether (Figure 2.9). PEG is quite efficiently excluded by membranes, particularly in its high-er molecular weight varieties. It needs to be pointed out, however, that this example is not entirely valid: PEG is not only larger than dimethylether is but – for some subtle reason even our renowned polymer chemist Jean Duhamel was not sure about either – it is also more polar.

3. L-DOPA as an example of drug distribution facilitated by specific transport

Another strategy to overcome membrane barriers is ex-emplified by DOPA (dihydroxyphenylalanine), the precur-sor of dopamine (Figure 2.10). Dopamine is lacking in the brain in Parkinson's disease. If dopamine itself is applied as a drug, it will not be able to cross the blood brain bar-rier. Although its precursor DOPA is too polar as well to cross the membrane by means of non-specific permeation, it can take advantage of the limited specificity of the aro-matic amino acid transporter. This transporter is found in the membranes that make up the blood brain barrier, and its function consists in keeping the brain supplied with pheny-lalanine, tyrosine, and tryptophan. Evidently, this strategy can be applied only in exceptional cases. 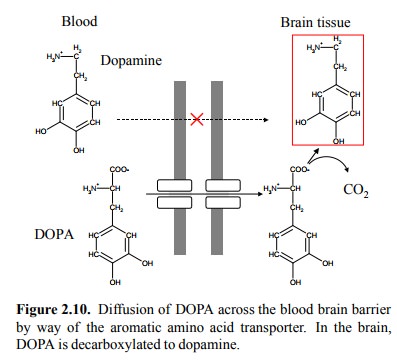 4. The `volume of distribution'

After their uptake into the systemic circulation, drugs are distributed between different compartments. These compartments are usually summed up as follows (Figure 2.11a): 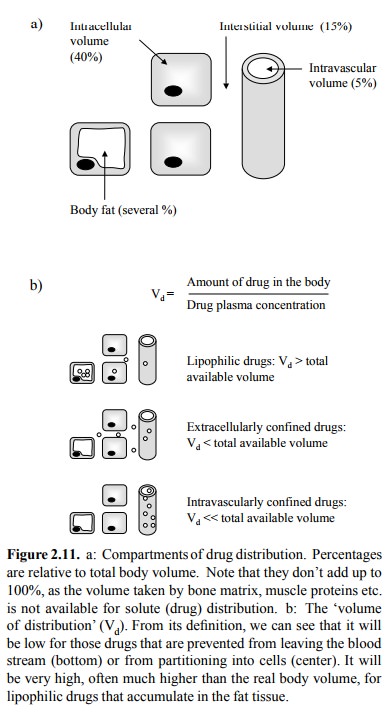 The `interstitial volume' is the extracellular volume out-side of the blood vessels. Note that it is three times larger than the intravascular volume! While its ionic composition closely resembles that of blood plasma (with which it is in equilibrium for all small solutes that are not protein-bound), it has a considerably lower protein content.

Body fat is an important reservoir for lipophilic drugs. This volume is more variable than the other ones, so no general volume fraction can be given. However, values in the range of 5-15% are not uncommon.

Few drugs are evenly distributed among these compart-ments. Factors that will affect the equilibrium distribution include:

•     Membrane-impermeant drugs will be excluded from the intracellular volume (Example: Lithium, which largely resembles sodium in its distribution)

•     Lipophilic drugs will be enriched in the fat tissue (exam-ple: Thiopental – see later)

•     Drugs with a high degree of protein binding will be more enriched in the plasma (i.e., the intravascular vol-ume) than in the interstitial fluid

An uneven distribution between the intravascular and the (combined) extravascular spaces implies that we cannot use the plasma concentration of a drug as an immediate mea-sure of the total amount in the body. To correct for uneven distribution, a coefficient named `volume of distribution' (Vd) has been invented (Figure 2.11a). This is not a real vol-ume but an experimentally determined number (with the dimension of a volume, hence the fancy name).

A factor that favours retention of a drug in the intravascu-lar volume (at least in the short term) is the binding of the drug to proteins (Figure 2.12), particularly albumin. Pro-tein binding is usually more pronounced with hydrophobic drug molecules, which are often bound to > 90% of their total concentration in the blood plasma. Albumin is by far the most abundant single plasma protein. Moreover, each albumin molecule affords multiple drug binding sites; these do not only bind drugs but also fatty acids, which prevents toxic effects of the fatty acids on cell membranes. 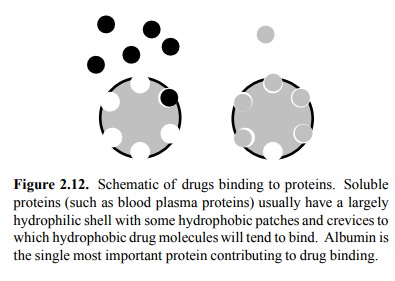 Protein binding is usually rapidly reversible, so that the bound fraction is not `lost ' – it can yet dissociate and bind to some drug target subsequently. However, one important consequence of plasma protein binding is that it will pre- vent glomerular filtration of the drug in the kidneys, which is an important step in drug excretion (see below).

The above considerations on drug partitioning mainly ap-ply to the equilibrium of drug distribution. However, it is important to realize that it may take some time until a drug that is applied rapidly (e.g., by injection or inhalation) ac-tually reaches equilibrium. A practically important exam-ple of non-equilibrium distribution is provided by the drug thiopental, which is a barbiturate used for short-duration narcosis (Figure 2.13). 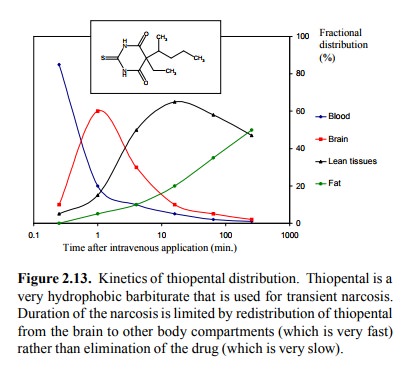 Thiopental is a very lipophilic drug that readily crosses the blood brain barrier. Very shortly after injection, the concentration in the brain peaks, and for a few minutes the level is high enough to effect narcosis. This is due, among other things, to the fact that the brain receives a very large fraction of the cardiac output (~20%).

However, after a short time, the drug leaves the brain again and accumulates in the lean tissues (such as muscle), from where it finally redistributes to the body fat. This reflects that the fat provides the most favourable (lipophilic) en-vironment; however, since it is only weakly perfused, sub-stance exchange works more slowly than with the other tis-sues. Note that, in this particular case, drug action is not ter-minated by elimination of the drug (as is usually the case), but solely by its redistribution from the site of action (the brain) to inert reservoirs (muscle / fat). Ultimate elimina-tion is very slow – it takes days to complete – and involves hepatic metabolism of the drug, followed by urinary ex-cretion.