Ultimately, most drugs are eliminated from the body via the kidney. As a rule of thumb, drugs can be directly elim-inated there if they are hydrophilic; hydrophobic drug molecules are typically metabolized to more hydrophilic derivatives in the liver before elimination (Figure 2.14).

Ultimately, most drugs are eliminated from the body via the kidney. As a rule of thumb, drugs can be directly elim-inated there if they are hydrophilic; hydrophobic drug molecules are typically metabolized to more hydrophilic derivatives in the liver before elimination (Figure 2.14).

To understand drug elimination in the kidney, we first have to consider some aspects of its structure and function.

The kidneys are located close to the aorta (Figure 2.15a) and, in terms of blood flow / tissue mass, are the most strongly perfused organ. Urine is `distilled' from the blood in several stages:

1.  Filtration: The kidneys are perfused at a rate of ~1.2 l/min. Approximately 10% of the blood plasma vol-ume is squeezed across a filtering membrane that re-tains most macromolecules but lets through small molecules. 2.  Re-absorption: Most small solutes – glucose, salts, and amino acids – are recovered from the filtrate and shut-tled back into the blood by specific transporters. Water is recovered by the ensuing osmotic gradient. Some so-lutes are partially or totally excluded from reuptake.

3.  Some substrates are actively secreted from the blood into the nascent urine.

The kidney tissue has a very intriguing structure. It is orga-nized into several thousand structural and functional units. A single unit – a `nephron' (Figure 2.15b) – spans the better part of the entire distance between the organ periphery and the renal pelvis, which simply collects the final urine and feeds it into the ureters..

Urine production starts in the glomerulus (Figure 2.16a, b). Arterial blood is passed along a flexuous stretch of special-ized small arteries, the walls of which act as a sieve. Figure 2.16b shows the structure of the glomerular vessel wall. The interior is covered by endothelial cells with mul-tiple holes ('fenestrations'). The podocytes (= `foot cells') form a likewise discontinuous outer layer. Between them is an acellular basal membrane, consisting of proteins and proteoglycans, which has the smallest pore diameter of all three and therefore, as in any the capillaries found else-where in the body, represents the effective filter layer. The filter has a cut-off size of very few nanometers, so that most protein molecules will be retained. Salt ions and small molecules – if they are not protein-bound – will be filtrated.

The amount of filtrate produced is about 150 l per day in a healthy adult; this corresponds to about 1/10 of the blood plasma volume that passes the kidneys.

The filtrate is funnelled into the tubule that leaves the glomerulus and passed down all the tubular elements of the nephron (see Figure 2.15c). It is during this passage that the volume of the filtrate is trimmed down to the final urine volume, and the urine composition is changed and adjusted in accordance with the prevailing physiological situation. This filtrate post-processing involves both re-absorption and active secretion by the epithelial cells in the tubuli (Fig-ure 2.16c).

These occur at different segments of the nephron:

2.  Loop of Henle: Reuptake of salt and water.

Mechanistically, most small solutes – glucose, salts, amino acids – are taken up again by specific active transporters. Active secretion likewise works by way of active transport. Typically, one transporter will pick up the substrate in ques-tion from the interstitial space and move it to the cytosol, from where a second transporter located in the apical mem-brane expels it into the nascent urine (see Figure 2.19). Wa-ter is recovered by the ensuing osmotic effect. Some solutes are partially or totally excluded from reuptake. Note that the final urine volume is about 100 times smaller than the primary filtrate. This means that the bulk of the fluid, salt and metabolites are actually reabsorbed. Some drugs are subject to reuptake to a similar extent, too.

For a solute (drug) that is quantitatively filtrated in the glomerulus, the extent of excretion is determined by its membrane permeability (Figure 2.17). If the solute is not membrane-permeant, it will get more and more concentrat-ed as the volume of the nascent urine gets reduced along the tubule; however, the absolute amount of the solute re-tained will not change. A model compound exemplifying this behaviour is inulin, a polysaccharide of about 6000 Da (Figure 2.18). Conversely, a drug that is fairly membrane-permeant (such as ethanol) would just diffuse back into the tissue (and, from there, the circulation). Its concentration in the nascent urine would, at all times, remain in equilib-rium with the interstitial fluid (which means, constant); the amount of drug retained in the urine would therefore de-crease in proportion to the urine volume. It is for this reason that ethanol is not eliminated efficiently by the kidneys but rather more slowly by the liver. We might pause a moment to lament this, although the high taxes in Canada suggest otherwise. 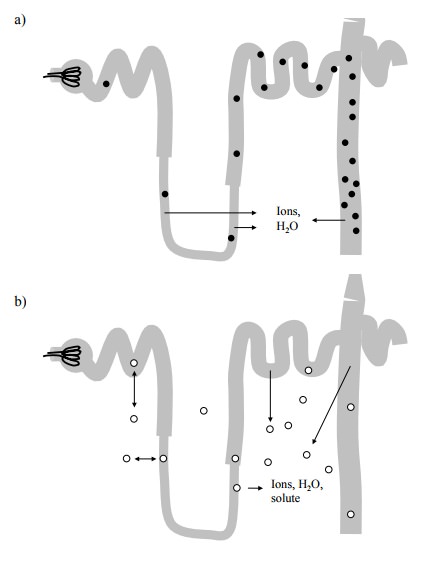 Membrane-permeant drugs are thus not efficiently elim-inated in the urine, even if they do get filtrated in the glomeruli. On the other hand, membrane-impermeant drugs get eliminated in proportion to the extent of glomeru-lar filtration. Glomerular filtration therefore is an important parameter in the elimination of drugs. It may vary consid-erably between different patients (example: A patient who has donated one kidney. Not the most common case of reduced kidney function but a straightforward one). With some drugs, it is important to know the glomerular filtration rate in advance to their clinical application.

An elegant experimental method for its determination uses inulin (Figure 2.18). Here is how this methods works:

Inulin is freely filtrated in the glomeruli, so that the concen-tration in the filtrate equals that in the plasma: Inulin is quantitatively retained in the urine, so that the number of molecules is the same in the filtrate and the fi-nal urine:

The number of molecules is the product of concentration and volume: Therefore, all we need is to apply inulin to a patient by in-travenous infusion, collect the urine for a certain amount of time (typically 24 h), determine the urine and plasma con-centrations, and apply equation 4 to calculate the volume that has been filtrated during these 24 hours.

The parameter determined in this experiment:

is called the renal `clearance' of inulin. It can of course also be determined for other solutes.In clinical practice, the endogenous marker creatinine (a metabolite of creatine, from muscle tissue) is commonly used instead of inulin. Its characteristics with respect to secretion and retention are less clear-cut than those of inulin; its clearance therefore is a less accurate measure of the glomerular filtration rate. As the basis of an even less accurate estimate, the plasma concentration of creatinine alone is frequently used, with-out any actual measurements of urine volume and concen-tration; the reasoning behind this is that the amount of cre-atinin produced does usually not vary all that much. This estimate is then used for determining initial drug dosages, which may be adjusted according to assays of the plasma concentrations of the drug itself later on.

Another model substance that is used experimentally for the assessment of kidney function is para-aminohippuric acid (p-AH). p-AH appears in the urine not just by filtration but mainly by active secretion in the proximal tubule. This active transport process occurs in two steps (Figure 2.19a): In the first step, p-AH is exchanged at the basolateral mem-brane of the proximal tubule cell against α-ketoglutarate or other divalent anions. This exchange is driven by the mem-brane potential (the interior of the tubule cell is electrically negative relative to the outside, as is the case with essential-ly all cells). In the second step, p-AH is secreted from the tubule cell into the tubule lumen. This involves exchange with mono-valent anions from the filtrate, driven not by charge but by concentration gradients.

Since p-AH is nearly quantitatively extracted from all blood plasma that reaches the kidney (the commonly reported fraction is 92%), its clearance can actually be used to de-termine the renal flow of blood plasma, without any serious invasive action. Here is the rationale:

If a certain volume of blood passes through the kidneys, p-AH is quantitatively transferred from the blood plasma to the (nascent) urine: Another implication of the quantitative extraction of p-AH is that this secretion mechanism is very powerful indeed. It is also of low specificity and operates likewise on many drugs that are organic acids, including penicillin.

Since penicillin is a substrate for the p-aminohippurate transporters, it is very rapidly cleared from the circulation. In the early days, when penicillin was very expensive, this rapid clearance was a major problem. The urine of patients receiving penicillin therapy was actually collected, and the secreted penicillin recovered. This problem was overcome by the development of probenecid (Figure 2.19b), which inhibits the second step in the above transport process.This results in a very pronounced prolongation of the retention of penicillin in the body. While no longer used routinely, probenecid is still used occasionally if high, stable plasma levels of penicillin are important in the treatment of life-threatening infections, such as brain abscesses.

As pointed out above, the extent of a drug's reuptake in the distal tubule depends on its membrane permeability. Here are two real world examples (Figure 2.20): Cimetidine has several ionizable groups and therefore is quite polar. Accordingly, it is only weakly protein-bound, effectively filtrated and retained and achieves a high clear-ance. Its clearance is actually higher than that of inulin – indicating that it must be actively secreted as well, and thus that active secretion is not confined to acids. Phenobarbi-tal is quite apolar (although it is a weak acid – where is the dissociable proton?). It is only moderately protein-bound; hence, it should get filtrated to about 50%. Yet, its clearance is very low – a clear indication that it gets reabsorbed along the way down the tubule.

An important consideration in this context is that the ex-tent of retention may vary with the urine pH, if the drug molecule is a weak acid or base. An example of applied pharmacokinetics from the underground is LSD (lysergic acid diethylamide; Figure 2.21). While a powerful hallu-cinogen, it is allegedly quite unpredictable whether the hal-lucinations will actually turn out pleasant or more along the lines of Count Dracula. In the latter case, it has been recom-mended to follow up the LSD with lots of vitamin C (ascor-bic acid). The kidneys will excrete excess acid equivalents in the urine. At acidic pH, LSD will become protonated and therefore no longer slip back across the tubule epithelium into the circulation; this will lead to accelerated elimination of LSD. We here have another example of the principle of `non-ionic diffusion', which we have previously discussed in the context of drug absorption.

The same strategy – artificial alkalization or acidification of the urine – is quite commonly employed in the clinical treatment of poisonings. However, if the poison (drug) is neither acidic nor basic, the only option is to increase the urine volume. In this case, the amount of the drug (assum-ing it to be membrane-permeant, as many are) eliminat-ed will simply be proportional to the volume of urine pro-duced. This strategy is called `forced diuresis'. Another, more effective but also more involved method for the ac-celerated elimination of hydrophobic drugs such as barbi turates is hemoperfusion. Here, blood is diverted from a large artery, typically in the thigh, passed over a hydropho-bic solid-phase absorber, and fed back into the correspond-ing vein.