These drugs inhibit the activity of HIV protease. This enzyme, which is required for the production of a ma-ture infectious virus, cleaves the gag-pol polyprotein into structural proteins and active enzymes.

These drugs inhibit the activity of HIV protease. This enzyme, which is required for the production of a ma-ture infectious virus, cleaves the gag-pol polyprotein into structural proteins and active enzymes. The phar-macokinetic parameters of the protease inhibitors are listed in Table 51.5.

All protease inhibitors can produce nausea, vomit-ing, diarrhea, and paresthesia. Drug-induced hyper-glycemia and insulin resistance may precipitate the onset of diabetes mellitus or worsen existing cases. Protease inhibitors may also cause hypercholester-olemia and hypertriglyceridemia. Liver enzymes may be increased, and hepatic toxicity may occur at high doses. Fat redistribution is common and can manifest as central fat accumulation, peripheral wasting, buffalo hump at the base of the neck, breast enlargement, and/or lipomas.

Protease inhibitors may increase the risk of bleeding in hemophiliacs. These drugs should be used with cau-tion in patients with diabetes, lipid disorders, and he-patic disease. Dosage adjustment may be necessary.

Protease inhibitors interact with a large number of drugs because they are metabolized by and inhibit CYP3A4. Ritonavir is the most potent inhibitor of CYP3A4, with indinavir, amprenavir, and nelfinavir be-ing much less potent and saquinavir the least potent. When given as part of a combination therapy, the pro-tease inhibitors affect plasma levels of NNRTIs as well as each other (Tables 51.4 and 51.6). Many drugs inter-act with protease inhibitors by inhibiting or inducing their metabolism; similarly, protease inhibitors inhibit or induce the metabolism of numerous drugs (Table 51.7). 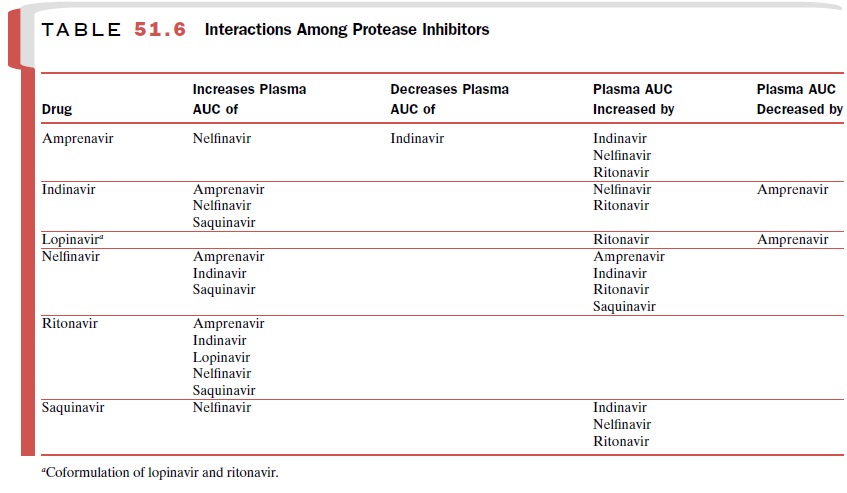 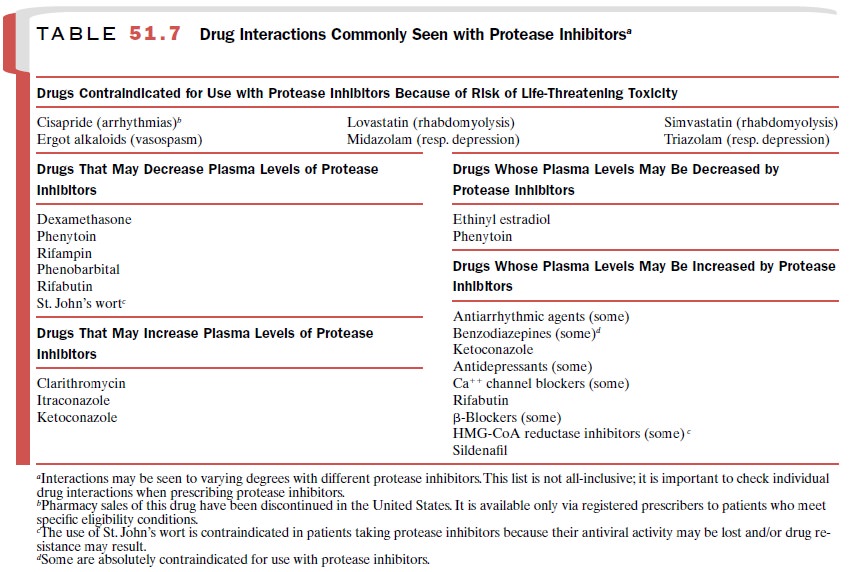 Saquinavir is a potent inhibitor of HIV-1 and HIV-2 protease. Fortovase, a soft gel preparation of saquinavir, has largely replaced saquinavir mesylate capsules (Invirase) because it has improved bioavailability. Saquinavir is usually well tolerated and most frequently produces mild gastrointestinal side effects.

Although ritonavir (Norvir) is a potent inhibitor of HIV-1 and HIV-2 protease, it is not well tolerated in higher doses. It is mainly used in low doses to increase blood levels of other protease inhibitors and to extend their dosing interval. Ritonavir is more commonly asso-ciated with gastrointestinal side effects, altered taste sensation, paresthesias, and hypertriglyceridemia than are other protease inhibitors. Pancreatitis may occur in the presence or absence of hypertriglyceridemia.

Of all the protease inhibitors, ritonavir is the most po-tent inhibitor of CYP3A4; therefore, it tends to produce more frequent and severe interactions with other drugs. It inhibits an additional cytochrome P450 isozyme, CYP2D6, and can increase plasma concentrations of drugs that are metabolized by it (e.g., most antidepres-sants, some antiarrhythmics, some opioid analgesics, some neuroleptics). For example, ritonavir should not be used in conjunction with amiodarone, bepridil, fle-cainide, propafenone, quinidine, or pimozide. In addi-tion to CYP3A4, ritonavir induces CYP1A2 and possi-bly CYP2C9 and may inhibit the breakdown of drugs metabolized by these enzymes.

Indinavir (Crixivan) is a potent inhibitor of HIV re-verse transcriptase. It produces the side effects common to all protease inhibitors and also may produce nephrolithiasis, urolithiasis, and possibly renal insuffi-ciency or renal failure. This problem occurs more frequently in children (approximately 30%) than adults (approximately 10%) and can be minimized by drinking at least 1.5 L of water daily. Additional side effects in-clude asymptomatic hyperbilirubinemia, alopecia, in-grown toenails, and paronychia. Hemolytic anemia rarely occurs. Rifampin should not be given with indi-navir.

Nelfinavir (Viracept) is probably the most commonly used protease inhibitor because of its low incidence of serious adverse effects. Its most common side effects are diarrhea and flatulence; these may resolve with con-tinued use. In addition to the drugs contraindicated for use with all protease inhibitors, amiodarone, rifampin, and quinidine are contraindicated in patients taking nelfinavir.

Amprenavir (Agenerase) is administered twice daily, providing the patient with an advantage over other pro-tease inhibitors that must be taken more frequently (e.g., indinavir, saquinavir). Common side effects of am- prenavir include nausea, vomiting, diarrhea, and perio-ral paraesthesias. Rash occurs in approximately 20 to 30% of patients and can be mild or severe (Stevens-Johnson syndrome).

Lopinavir is available in the United States only as a fixed-dose combination with ritonavir (Kaletra). In this regimen, a low dose of ritonavir is used to inhibit the rapid inactivation of lopinavir by CYP3A4. Side effects, which are generally mild, include diarrhea, nausea, as-thenia, and headache. Pancreatitis occurs rarely. Ritonavir is a potent inhibitor of CYP3A4 and also in-hibits CYP2D6. In addition to the drugs contraindi-cated for all protease inhibitors, flecainide, propa-fenone, pimozide, and rifampin should not be given with lopinavir–ritonavir combination therapy.