Drowning is the 3rd leading cause of unintentional injury death worldwide, accounting for 7% of all injury-related deaths.

Drowning is the 3rd leading cause of unintentional injury death worldwide, accounting for 7% of all injury-related deaths. There are an estimated 3,72,000 annual drowning deaths worldwide. Children, males and individuals with increased access to water are most at risk of drowning. Drowning is the process of experiencing respiratory impairment from submersion/immersion in liquid; outcomes are classified as death, morbidity and no morbidity.

It is one of our most visceral fears; thrashing in the deep, far below the water’s surface, lungs burning for oxygen. Drowning claims hundreds of thousands of lives every year, a great many of whom are young children. Of course, exposure to water is a key factor in drowning, but there is a strong economic correlation as well. Those in poorer countries are far more likely to be drowning. In Bangladesh, 17,000 children drown annually that’s 46 a day. 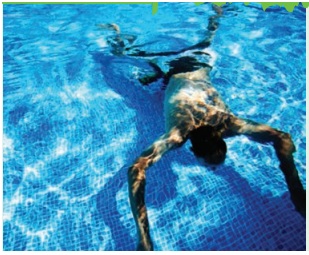 At first glance, it would appear that swimming in the ocean is far more dangerous than swimming in a lake. Crashing waves and riptides can easily sweep beachgoers to their doom. But shockingly enough, about 90 percent of drowning cases occur in freshwater. The reason involves a bit of chemistry. Fresh water is more similar in composition to our own blood than salt water. When it is inhaled into the lungs, it passes into the bloodstream through osmosis. When the blood is so radically diluted, cells burst, leading to organ failure. The entire process takes two to three minutes.

Ocean water contains far more salt than human blood. When it is aspirated, the body attempts to regulate itself by transferring water into the lungs, thickening the blood. It takes considerably longer to kill a person, between 8 to 10 minutes, allowing a much greater chance of rescue.

Males are especially at risk of drowning, with twice the overall mortality rate of females. Studies suggest that the higher drowning rates among males are due to increased exposure to water and riskier behavior such as swimming alone, drinking alcohol before swimming alone and boating. Drowning accounts for 75% of deaths in flood disasters.

Setting and enforcing safe boating, shipping and ferry regulations is an important part of improving safety on the water and preventing drowning. Building resilience to flooding and managing flood risks through better disaster preparedness planning, land use planning, and early warning systems can prevent drowning during flood disasters.